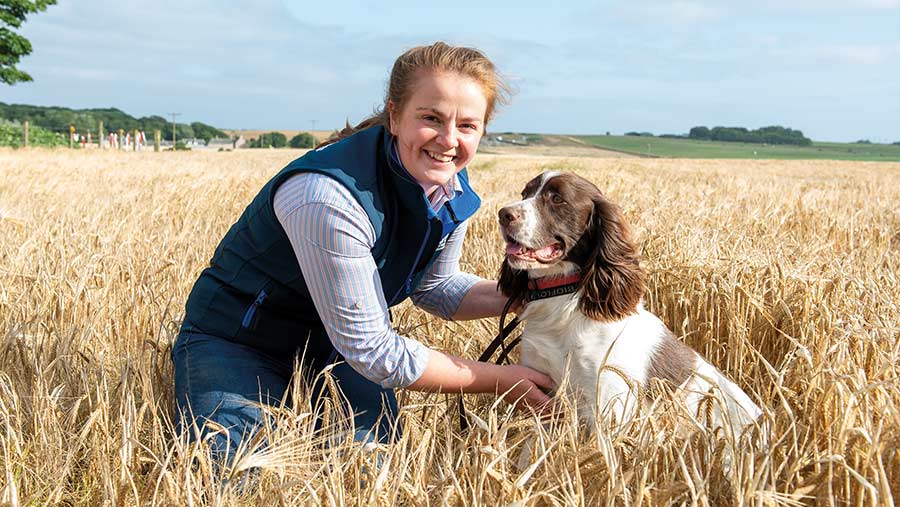 Harriet Ross, 29, grew up on the family arable farm but was encouraged to pursue a non-agricultural degree.

Although she wasn’t pushed down the farming route, she found her way back to it after realising her passion for the sector.

After graduating she spent several years working as a farming consultant, leaving the role in July in order to fully commit to her agriculture enterprises.

Now, alongside partner Ben, she owns a successful pig farm, manages what used to be her parents’ arable enterprise, runs a livery diversification, and holds a 10-year tenancy.

While at university, Harriet set up a livery business at the family farm, using a grant to convert a farm shed into an indoor school.

In 2019, Harriet and Ben applied for a three-year short limited-duration tenancy at 158ha Newseat of Drumbreck, among more than 40 applicants.

Once shortlisted, they were thoroughly questioned by a five-person judging panel and impressed with their comprehensive answers, as well as the written support from their bank and solicitor.

Two years into the agreement and with the ending date already looming, the couple were wary of investing any more in the holding.

Fortunately, after some negotiations with the landlord, the agreement was extended for a further seven years.

So far, it has been run predominantly as an arable unit, with 2,400 B&B pigs.

In August, the pair bought a neighbouring pig farm, taking on a staff of six and 460 sows.

They had been contracting for the owner, and after harvest 2020 they approached him to ask about a joint venture. Instead, in February 2021, he offered them the chance to buy it, partly based on the strength of their existing working relationship.

Harriet has impressively combined multiple enterprises that fully complement each other, showing good knowledge and a logical decision-making process.

The more regular income from the pigs helps support the arable system, the manure is used instead of fertiliser, and the land is used to grow food for the pigs, more than halving the food costs. Meanwhile, the unit’s poorer land is utilised by the livery business.

Although Harriet is keen to evaluate her business and make improvements where necessary – particularly with efficiency and costings – she also appreciates the importance of not rushing into anything.

Once she has found her feet with the new pig farm, she plans to determine whether to continue collecting semen from their own boars or switch to artificial insemination, and will consider cycling the gilts rather than waiting for them to come into heat.

She would like to improve her management skills and work on recording as much as possible.

Adding value, reducing antibiotics use and soya consumption, and working in harmony with the environment are key aims.

Harriet has already done a carbon audit for her arable enterprise and is interested to see how this can be developed with the addition of the pigs.

She knows exactly where to go for advice about any aspect of her businesses and is always keen and willing to do so.

Harriet has worked hard to establish a sustainable and profitable business that is ready to adapt. She is reviewing alternative income streams to ensure the business remains viable and is interested in benchmarking against and learning from others.
Cath Crowther, CLA East regional director