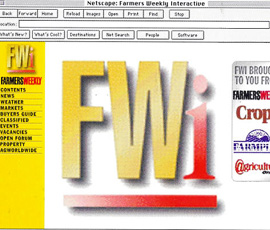 This week sees the 15th anniversary of the launch of Farmers Weekly Interactive (FWi), which was launched at the Royal Show in 1997.

It was one of the first online services tailor-made for the agricultural industry and even came four months ahead of the full launch of the BBC’s online news service.

In farming, BSE was high on the agenda following the introduction of a ban on British beef exports the year before.

In our launch week we reported on the proliferation of quality assurance schemes for farming resulting from the BSE crisis, which were baffling consumers and farmers alike.

Cornish potato growers took to the streets as prices fell in the market to highlight their plight and farmers were also up in arms over the BBC’s Farming Today programme, which they feared was up for the chop.

Also in the news at the time, Tony Blair had just brought Labour to power after 18 years of Conservative rule, Princess Diana was tragically killed in a car crash and the IRA called a ceasefire.

On a lighter note, Channel 5 launched its TV channel and we finally won a Eurovision Song Contest with Katrina and the Waves’entry!

How much do you remember from the stories of the day?

Test you memory with our quiz.