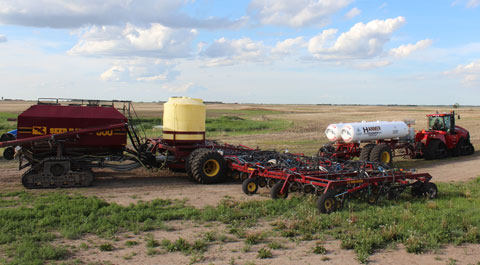 For most of us, managing a fleet of almost 50 high-horsepower machines sounds like a job of dizzying complexity. But Oliver Mark met one Canadian farmer who’s got it down to a tee

I’ve lived in the comparatively miniscule frame of the UK my whole life so, for me, looking at a map of central Canada is a wickedly deceiving experience.

It takes a hardy sole to set up a home – and a farm – on these vast, lonely plains. Coyotes, mosquitoes and moose make up a bulk of the prairie population, sprinkled with occasional signs of human habitation.

Old wooden shacks hint at a long-gone era of close farming communities, cathedral-like grain towers act as pin-pricks puncturing the sky and tornado-battered grain silos lay toppled and broken like Saddam Hussain’s statue the day it was finally wrestled to the ground.

But despite its sparsity, Saskatchewan – a central Canadian province covering a land area two-and-a-half times the UK but with a population equal to that of Birmingham – is a place of surprising wealth.

It has oil reserves larger than mega-rich Saudi Arabia. It has 60% of the world’s entire potash reserves, trucks out more uranium than any other country and sits on almost half of Canada’s productive farmland. In the opinion of many Saskatchewan residents, it’s teetering on the edge of a serious boom period.

One family that has mastered the art of farming in such a hostile place is the Hanmers. They own an ever-growing patch of land on the northern fringe of Saskatchewan. The family has slowly accumulated land (see ‘Farm facts’) as local farmers up sticks and seek more cash in the oil fields further north.

The farm now spreads across 12,200ha of some of Canada’s finest (and worst) arable land. Soil types range from heavy clay-loam to sand and the climate varies to such an extent that crop insurance premiums blow the farm budget.

“Instead we choose to insure our revenue against natural disasters,” says Brad Hanmer, who manages the agronomy and logistical side of the business. “It came in handy back in 2010 when the Great Flood meant we couldn’t drill 2,500ha of our land.”

“We have a very high water table across the province, which means we have slews (wet, boggy patches of ground that vary in size from a puddle to a pond) dotted across every field.”

Rainfall averages 400mm a year – peaking in the early summer months – and it’s not unusual to be hit by 50mm rainstorms in a day. 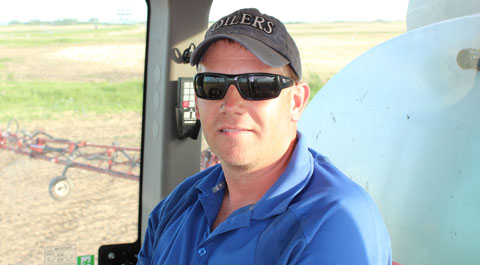 Brad Hanmer manages the agronomy and logistical sides of the business

Spring sown canola is the key crop here. Canola-biased rotations see it grown every other year and its value has trebled since 1995 (although, unfortunately, so has the cost of production), making it a high risk, high value commodity.

Round-up ready crops see the farm get through 35,000-litres of glyphosate each year. It makes life easy for the spray men, but Mr Hanmer says he is always conscious to include different products in tank mixes to minimise the chance of resistance build-up.

When it comes to spray application speed is of the essence. The three Case Patriot sprayers cover up to 2,000ha/day and usually travel at 35kph. Tillage trains travel quickly, too – about 20kph – while seeding happens at a leisurely-sounding 8kph.

Despite that, the entire 12,200ha was drilled in 17 days this year. The four 24m Seed Hawk drills can cover 125ha on one fill, with GPS-guided Quadtracs tugging an 18t grain hopper, 9,100-litres liquid phosphate and 18,200-litres anhydrous ammonia (82% nitrogen) all in one pass.

Tillage activities are kept to a minimum – the harsh climate doesn’t afford farmers the time to loosen the soil after the snow melts. Instead, Saskatchewan farmers claim to be the originators of the no-till practice. Because summer temperatures linger in the mid-30s there are yield benefits associated with minimising tillage activities too.

Nonetheless, the Hanmers have recently adopted a vertical tillage rotation to try and improve yields.

“We try and loosen the very top layer of soil prior to sowing canola – our highest value crop,” says Mr Hanmer. “It leaves the subsoil in place to minimise moisture loss but time pressures are too great to be able to do that with the other crops on the farm.”

The rapid growth of the farm has been helped massively by improvements in farm machinery. Just one more combine is part of the red-dominated machinery fleet than was used in 1995 despite the farm more than quadrupling in size, but the outputs of the new Case 9230s are far higher than the 2188s that ran 18 years ago.

To get the best from the expensive machinery line-up, Mr Hanmer only adds to the farm’s area in 2,000ha blocks – the equivalent of adding an extra combine to the fleet.

Such is Mr Hanmer’s organisation he already knows the price he’ll receive for next seasons combine trade-ins (they’re not even on the farm yet), and he makes use of multi-unit discounts on machinery each year. This autumn will see the sprayers and combines chopped in, along with a Magnum to make up the numbers to discount level.

Replacing the frontline kit annually (or every three years at worst) also gives Mr Hanmer full warranty protection. Service costs are high in Canada because many of the engineers that are qualified to spin a spanner on high-value kit head to the mining areas to make more money. 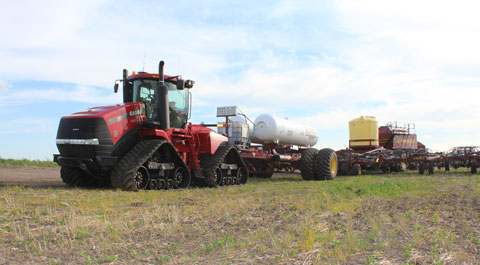 While plenty of UK arable farmers seek out the ski slopes over winter, most Canadian farmers escape the 8m snow drifts by holidaying (or living) in the southern states of the US and Central America.

But a closed-season add-on to the Hanmer business sees as many as 12 employees kept busy year round, including two college graduates – Richard Peck and Matt Baker. 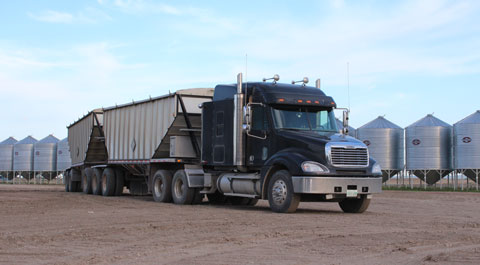 The evolution of the Hanmer’s farm business provides the perfect timeline to plot the changes in Canadian agriculture over the last century.

The Hanmer’s first moved to Canada in 1901 when they boarded a boat across the Atlantic. The Canadian Homestead Act, which gave any willing settlers a quarter section – a half-mile-square block of land (64ha) – in exchange for $1, was in full swing and, by the time Mr Hanmer had made it across the pond, 80m ha had already been allocated.

The success of the program coincided with the development of the state-owned Canadian Pacific Railway, which provided new citizens with a route into the heart of Canada. Immigration peaked in 1910 when the Saskatchewan population alone had rocketed from 90,000 to almost half-a-million in the space of a decade.

The family settled in Govan, a Norwegian-dominated community 70-miles north of Regina. Farming was largely subsistence-based at the time – the challenge was to gather enough food and materials each year to survive harsh winters on the tree-free rangelands.

By the 1930s the smaller farms had begun to disappear and the lure of the gold rush and vast mineral deposits found in Saskatchewan tempted many farmers away.

Fast forward to 1995 and the Hanmer patch had swollen to 2,800ha and it has grown almost exponentially since then. The rural communities have vanished – young farmers can double their wages by working in the oil fields – and now just one family farms where there were once 200. 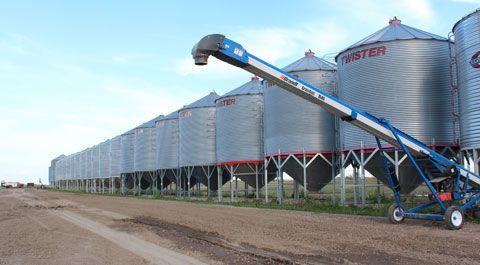