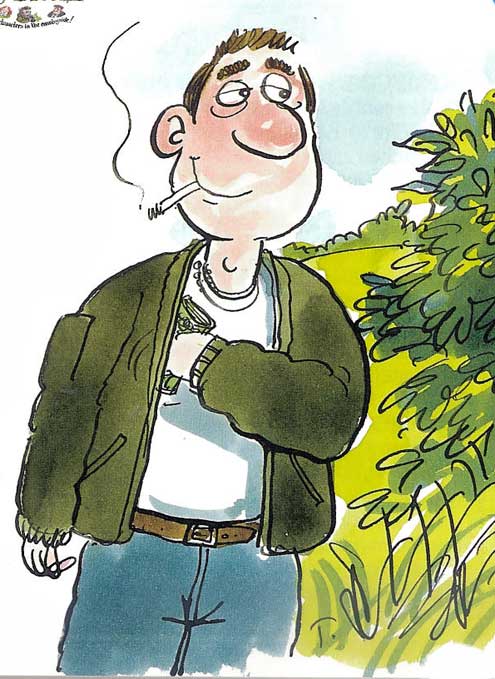 Join us for a funny, irreverent look at some of the characters that make the British countryside what it is. Our tongue-in-cheek guide puts characters such as the retired Major, the “perfect” next-door farmer and the young tearaway under the microscope. Here we meet Dean, the tearaway, who you can often find in the Golden Lion, slumped at the bar, spouting offensive and bigoted opinions or approaching someone menacingly with a pool cue.

Ask anyone in the village and they’ll tell you Dean’s trouble and best avoided. Ask Dean’s mum and she’ll tell you he’s a lovely lad – misunderstood, maybe – but he got in with the wrong crowd as a teenager. Ask Dean and he’ll say: “What’s it gotta do with you?” and then threaten to punch you.

Since he stole a friend’s bike at the age of seven, Dean’s concept of lawfulness has become increasingly blurred. Now, aged 25, his criminal record embraces everything from theft to GBH.

From a distance, you could be forgiven for confusing the cottage with a scrap yard. At the last count, there were three complete cars – and five more in bits – scattered around the lawn, the drive and on the pavement.

You probably won’t find Dean there. He’ll be in the Golden Lion, slumped at the bar, spouting offensive and bigoted opinions or approaching someone menacingly with a pool cue.

This year Dean did lambing for a week at Easter, fruit picking in the summer and grain carting during harvest. In all three cases, his term of employment was cut short after an item of value disappeared. In one case, an ATV.

Trace, his long-suffering girlfriend, bless her, will be out at work. She knows the bills need paying, that food needs putting on the table and that the kids are never more than a step away from being shoeless.

This year Dean did lambing for a week at Easter, fruit picking in the summer and grain carting during harvest. In all three cases, his term of employment was cut short after an item of value disappeared. In one case, an ATV.

“It’s not fair,” he said every time. It’s always me that gets the blame. It’s just because I’ve got tattoos.”

But the magistrate – the local landowner’s wife – couldn’t see his tattoos while pondering his fate. They were covered up by his “court suit”, an ill-fitting, shiny-grey number passed down from his older brother that comes out of the wardrobe anything between one and three times a year, depending on his “luck”.

The magistrate wasn’t impressed with the suit – any more than she was with his alibi. “You’re an opportunist, preying on hard-working people,” she said. “There is,” she added in a line as oft-used by her as any of Dean’s proclamations of innocence, “no such thing as a victimless crime.”

She imposed a fine and community service. Trace, looking on from the public gallery – the dog was tied up outside – began crying.

“Posh cow,” Dean yelled at the magistrate. “He shouldn’t have left the quad bike there if he didn’t want it to get nicked.” This was something of a departure from his earlier claim that he didn’t even know there was a quad bike on the farm.

That night, someone daubed “GRASS” on the farmer’s barn – and it wasn’t, presumably, a reference to his silage-making prowess. The next day, his straw stack burnt down. Dean, needless to say, had an alibi as to his whereabouts on both occasions.