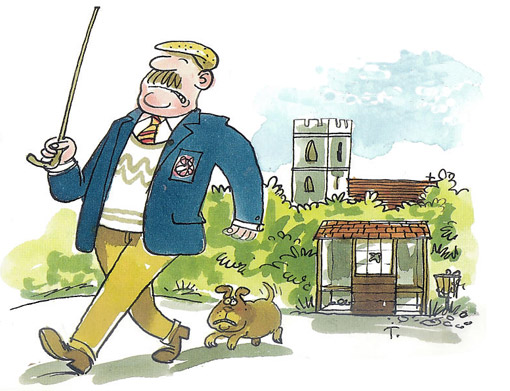 Join us for a funny, irreverent look at some of the characters that make the British countryside what it is. Our tongue-in-cheek guide puts characters such as the attentive Brigette, the “perfect” next-door farmer and the young tearaway under the microscope. Here we meet Major Stern, the no-nonsense ex-Army chap…


Major Stern doesn’t stand for any nonsense. Kids dropping litter, teenagers standing on street corners, drivers breaking speed limits. “I’ll not have it,” he says, “not in my village.”

The Major’s solution is simple: “Horse-whip them.” Most of his solutions, in fact, are simple and compromise either hard labour, physical endurance or punishment. Or, ideally, a combination of all three.

The Major insists on being called the Major, despite leaving the services more than 20 years ago. He’s kept the military bearing, the moustache and the stiff upper lip. “Left, right, left, right,” the village kids call as he walks past with his old dog bumbling behind him. “Keep up, damn dog,” he barks at it.

It’s the tone he used, to such effect, in the Services. The tone he uses now on his wife and sons. The tone the paperboy, on the mornings he’s a few minutes late, has learnt to fear. “You wouldn’t last five minutes in the Army,” the Major bellows at the poor wretch, wobbling up the drive on his bicycle weighed down by The Spectator and The Field.

Major Stern’s wife, a small quietly-spoken hen-like lady, has learnt to keep her opinions to herself. Ever since, in fact, questioning the morality of the Army’s presence in Iraq. “We’ll have no subordination in this house,” he told her. And that, quite simply, was the end of that.

The Major’s life is conducted with the same regimentation as was his military career. Up at 0600 hours, sharp. Breakfast 0620. Correspondence until 0900.

He marches around the village, fiddling with his moustache, smoking his pipe and ruing the demise of the Colonies. It’s not that long,” he says, since the British Army was the envy of the world. “A great fighting machine. Until that is, the politicians got their hands on it.”

The Major’s life is conducted with the same regimentation as was his military career. Up at 0600 hours, sharp. Breakfast 0620. Correspondence until 0900. Charity commitments. Lunch. Gardening. Tea. Reading. Committee work. A gin and tonic. Pub.

He’s organising the village’s annual ball at the moment. The poor caterers have never known anything like it – being threatened with a damn horsewhipping. The string quartet have orders – direct orders – to play Mozart. The marquee firm have a soldier’s word that they’ll be paid within 28 days.

However busy he is, the Major always finds time to complain about the Italians. “No fighting spirit.”

And as for the Germans, well, his view on them could put back European integration 15 years.

It’s unfortunate, really, that the Major’s village is popular with German tourists. “Ar, hello, Gud Morning, ve are from za Germany” they say. The Major, angry, flushed, ignores them.

He gets home and, unsettled, cleans his shotgun, taking it apart, oiling it then putting it back together, with the careful, ordered precision instinctive only to craftsmen and soldiers. He does this in his study. “His headquarters,” his sons call it.

Later that night in the pub, gin and tonic in hand, the Major drifts into combat stories. “Some of the things I saw I’ll never talk about,” he says. Then he talks about them.

The German tourists come in for a drink and the Major bristles. “Most people I know have never set foot in Germany – they’ve only seen it from the air,” he jokes, then retreats home.