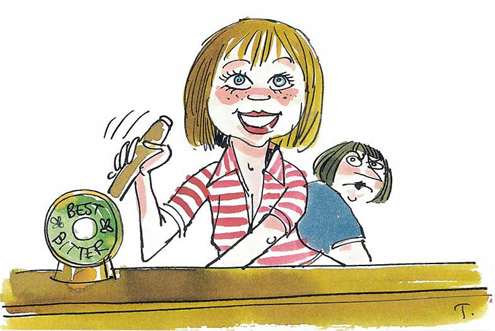 Join us for a funny, irreverent look at some of the characters that make the British countryside what it is. Our tongue-in-cheek guide puts characters such as the retired Major, the “perfect” next-door farmer and the young tearaway under the microscope. Here we meet Rebecca, the barmaid, who has a special smile for every customer.

Rebecca’s feet ache. She’s been on the go all evening, pulling pints behind the bar in The Three Kings.

As holiday jobs go, it’s OK. It’s convenient, too, just around the corner from her parents’ house, where she’s spending the Easter holiday from university.

“I’ve got experience in the union bar,” she had told the landlord, Ted, when she went to see him about a part-time job. He was impressed with her initiative. Impressed with her smile, too. The fact that Rebecca’s mum and dad live in the nice house on the hill – the one with the bit of paddock that he’s been trying to buy for 20 years – had nothing to do with it.

Rebecca’s a pretty girl. You can’t help but notice that. The punters certainly didn’t fail to notice.

Rebecca’s got a special smile for each and every one of the customers. “Do you want it stirred?” she asks, leaning forward, maintaining eye contact for a second longer than most of them are used to. She knows it’s good business.

She knows, however, where to draw the line. And she certainly won’t stand for any funny business. “What the hell do you think you’re doing?” she screamed at George, that time his hand brushed her knee. He claimed he was reaching for the complementary cheese nibbles. She said he was a pervert.

The publican’s wife is a little jealous of the attention Rebecca gets. “Do that top button up, girl – what sort of place do you think we’re running?” she barked at the nervous Rebecca on her first day.

Rebecca’s tired of being called “luv”. And she’s bored with hearing stories about the regulars’ college days – always far better, far more raucous, far more challenging intellectually than those of today’s students. Either that or they’re bemoaning the pointlessness of higher education (you only learn by doing things, not by reading about them).

She’s tired of being asked about “school”, too. “University’s great,” she tells them, feeling guilty for not using the holidays to do more studying. Still, she needs the money. A student loan doesn’t go that far,

When they hear she’s studying politics, it always sparks a fierce debate on the state of the economy. The performance of the Coalition. The double-dip recession. Quantitative Easing (whatever the hell that might be).

It’s as if some of the customers don’t have homes to go to. Ordering another drink, then another, then another. Ruminating on life’s great questions (including where the pub’s dartboard went). “Better make this one just a half, though, or I’ll be in trouble with ‘er indoors,” they say.

Her boyfriend came to stay for a couple of days and sat in the pub. Rob didn’t get on with the locals. He tried – but it didn’t quite work. They weren’t interested in his latest pet subject, Afghanistan history, and they certainly didn’t want to hear about his rag week antics. “Posh git,” one of the regulars called him.

Rebecca’s still quite fond of this pub. It’s cute in a homely, traditional sort of way. “A real gem of a place,” she says.

But you won’t find her celebrating here next summer when she graduates. She’ll be in the new swanky wine bar just down the road from the uni campus. “And if I’m pulling anything then, it won’t be pints,” she laughs.