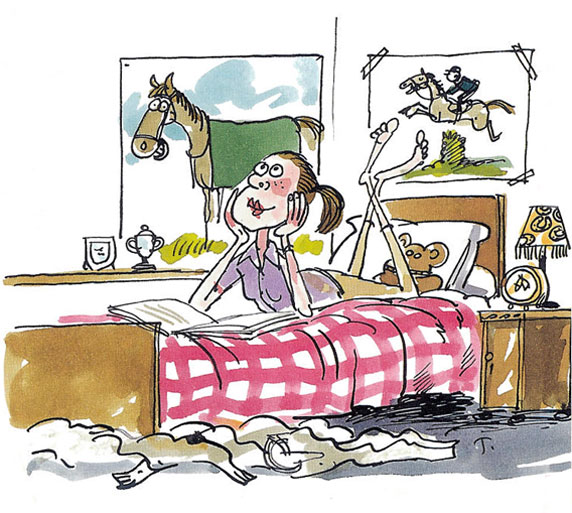 Join us for a funny, irreverent look at some of the characters that make the British countryside what it is. Our tongue-in-cheek guide puts characters such as the retired Major, the “perfect” next-door farmer and the young tearaway under the microscope. Here we meet the pony-mad girl Sarah, who’s bedroom is a shrine to all things equine…

Sarah can’t understand anyone who doesn’t like horses. She can’t think of anything more beautiful. She even loves the smell. She lives, breathes and talks horses – as far as Sarah is concerned, New Zealand is a rug, not a country.

It was her mother who taught her to ride – as it’s her mother who makes her do most things. “Grip with your knees,” she’d bellow from the end of the lunge rain as Sarah tried to master the sitting trot on Cocoa, her beloved 12.2-hand bay mare. Sarah learned to grip.

Sarah cried when Cocoa had to go – but knew she needed something bigger. Something faster. Cocoa’s replacement, Pickwick, is a bit headstrong and prone to laminitis if he gets too much grass – but Sarah doesn’t mind. She loves him.

“You look pretty with your hair down,” dad tells her. But she prefers it drawn back into a ponytail. It’s not like she wants to impress the boys or anything.

When not at school, Sarah lives in well-worn Puffa and Hunter wellingtons. She has a pair of long, leather boots, which she lovingly cleans but seldom wears. Her father claims they were a waste of money. Sarah tells him she’s saving them for best.

Sarah’s bedroom is a shrine to the horsey world. While Lucy, her best friend, has posters of JLS and One Direction on her walls, Sarah’s are lined with pictures from Horse & Hound and rosettes. Dirty jodhpurs litter the floor – but she doesn’t notice the smell.

Sarah is torn about hunting. Her school friends say it’s cruel, but her mother says they should never have banned it.

She knows she doesn’t like the idea of a fox being chased and killed – but she does like the idea of galloping through the countryside. She could wear her new hacking jacket – the one she got for her 12th birthday. And her leather boots.

“You look pretty with your hair down,” dad tells her. But she prefers it drawn back into a ponytail. It’s not like she wants to impress the boys or anything. Half the time her hair is hidden beneath her skull cap anyway.

Sarah would rather ride without a hat, but her mother says she must always wear one. “You only have one head,” she says.

When he feels like winding her up, Sarah’s older brother Toby teases her that she’ll get a big bum when she’s older. “All horsey women do,” he reckons. She used to ignore him, but she’s started having doubts. She’s seen her mother from behind.

She worries about this and her spots and whose class she’ll be in next year, so to make herself feel better she goes to see Pickwick. He’ll understand. She strokes him and, yes, everything seems suddenly better. He’s just so, so beautiful. How, she wonders again, can anyone possibly not like horses?