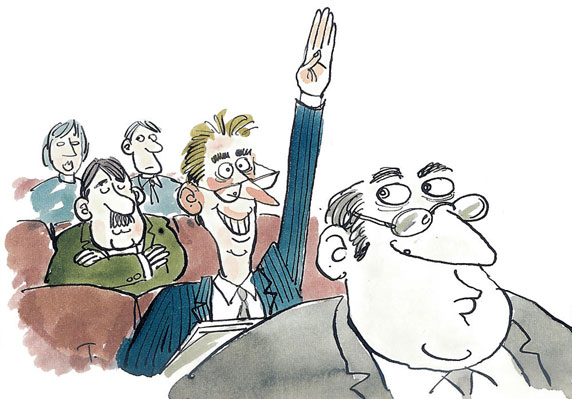 Join us for a funny, irreverent look at some of the characters that make the British countryside what it is. Our tongue-in-cheek guide puts characters such as the retired Major, the “perfect” next-door farmer and the young tearaway under the microscope. Here we meet Tom the conference delegate, a well-known face on the conference scene who always has a question…

It’s the winter months and Tom’s trekking around conferences at a rate of two a week.

Ask him what he gets out of it and, well, he’s not exactly sure – just a chance to catch up on the news, meet old friends. Afterwards, he’ll talk, nonetheless, about how fascinating the papers were. How stimulating. How thought-provoking.

It’s a quiet time work-wise for the 40-something consultant – so he’s making the most of it. He listens, suited or tweeded, to speaker after speaker explaining what a SWOT analysis is and how businesses today have to be efficient and effective and how the world population is set to reach nine billion before too long.

And he’ll chuckle every time he hears the one about how, if all the world’s economists were laid end to end, they still wouldn’t reach a conclusion.

Tom’s a well-known face on the circuit. When he puts his hand up to ask a question – as he always does – he feels a little smug when the chairman refers to him by name. His question will be long – more of a point than a question, really – as our conference-goer, demure as he may appear, quite likes being in the spotlight.

He chuckles as each speaker concludes their presentation with some banal aphorism like: “The future is ahead of us”. And then he’ll clap enthusiastically when asked to show his appreciation in the usual fashion.

Morning coffee and afternoon tea breaks will see Tom in the hall foyer on his mobile. He’ll be using words like “gross margin” or “fixed cost” before heading back in to shake as many hands as possible.

Tom’s a well-known face on the circuit. When he puts his hand up to ask a question, he feels a little smug when the chairman refers to him by name.

He’ll be pouting out his chest, displaying his name badge. It’s a good chance to meet people – networking, as he calls it – and, having scanned the delegate list, he’ll know exactly who’s worth meeting and who’s not. It’s like his mentor in his first job always used to say: “Everyone’s a potential client, Tom, everyone.”

It seems like a lifetime ago, that first job. He tells people about it over lunch. The days, he recalls, before foot-and-mouth, bureaucracy or talk of traceability. Which reminds him, there’s a paper immediately after lunch he’s particularly looking forward to titled “Traceability – threat or opportunity”.

Unfortunately the wine takes its toll and Tom sleeps through it. Well, not completely through it – he wakes up just in time to hear the speaker’s closing line: “The future is ahead of us.”

And then he rushes out to tell people how stimulating and thought-provoking the paper was.