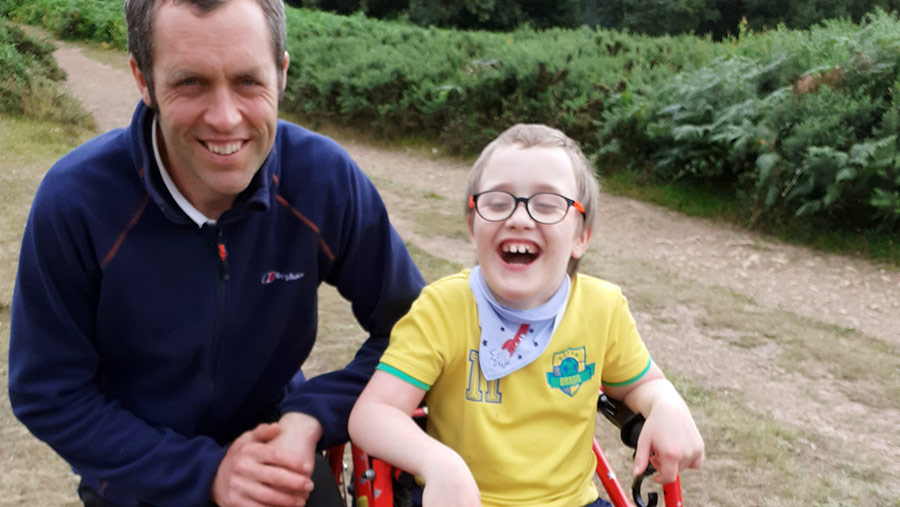 A Devon farming family is trying to raise £60,000 to give their son life-changing surgery and help him realise his dream of walking.

Neil and Lowri Weston from Bampton are hoping to raise the cash to fund surgery, physiotherapy and equipment for their son, Eddie, who has cerebral palsy.

The couple wants Eddie, 8, to have a selective dorsal rhizitomy (SDR) operation, which can permanently reduce muscle stiffness, potentially enabling him to move around more easily, walk and be more independent.

Without the operation, Eddie’s muscles will continue to tighten into his teenage years and adulthood, leaving him ever more reliant on his wheelchair.

“We’re doing this to ensure he won’t lose his ability to walk with his walking frame and tripod sticks and so that he may realise his dream of ‘walking with his feet’ and ‘being free’,” said Mr Weston.

The NHS, however, typically funds this operation only for children between three and nine years old, and the waiting list is long.

Eddie also needs further tests to determine his eligibility for SDR, and the coronavirus lockdown has delayed these assessments and created a backlog of children are waiting for assessments and SDR surgery.

Depending on the results of further tests, the NHS hopes to operate on Eddie sometime in 2021, before he turns 10, but no date can be set for the operation at this point, so the Westons have launched their bid to pay for SDR privately.

“Eddie is nine in December. He’s already an older child for this type of operation and we feel he really needs surgery as soon as possible as he could well start to lose mobility function after that age,” said Mr Weston.

“Eddie has done well to maintain and improve his mobility to date. Children of his ability usually plateau at six or seven years of age and start to decline at about eight.

“After many years of physiotherapy, Eddie took his very first independent step just before he was eight. His personal best is 10 independent steps, though he finds it exhausting and very, very difficult. Eddie can only take these steps with one-to-one adult supervision during physiotherapy sessions.”

Family fundraisers have included a virtual bake-off, a virtual run and, with a bit of help from Dad, Eddie is attempting a 5km trike ride on 5 September.

Find out more and support the Eddie’s Every Step Counts campaign at the Tree of Hope website.