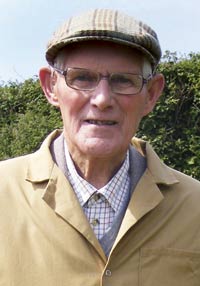 In the fourth of our series celebrating commitment and service to agriculture and the countryside, Olivia Cooper meets George Ford

George Ford’s family have been farming in the same area for four generations, and he has never known – or wanted to know – anything else.


“My father, and his father before him, farmed all their lives; those that are born into it are the best farmers of all,” he says.

When George was eight the family moved across the valley near Newton Tracey, Devon, from the 75-acre West Kenacott Farm to West Pristacott Farm, which had 240 acres. “We were a big family – I was one of eight – that’s why father took a bigger farm.”

George helped out from then onwards, with sheep, pigs, cattle, chickens, ducks, geese and the arable land. “I’ve been here 76 years now,” he says.

Aged 12, he joined the Young Farmers Club, which proved his true education. “You had to learn everything, from shearing and milking to gate-making and fencing.”

George took over the farm from his father when he was 26, in partnership with his older brother Ralph.

One of the busiest times of the year was Flatpol – a cabbage-like plant used for cattle feed – season from April to June. The family were one of the largest Flatpol growers in the area. “Father would go to market every day of the week. He’d take 30,000 Flatpol plants and Brussels sprouts, and always sold out.”

The family also had a stall at Barnstaple Pannier Market, where George met his wife Josephine, whose parents had a stall next to his. “I’ve known her all my life. Josie’s mother used to take her to the market in a basket as a baby.” 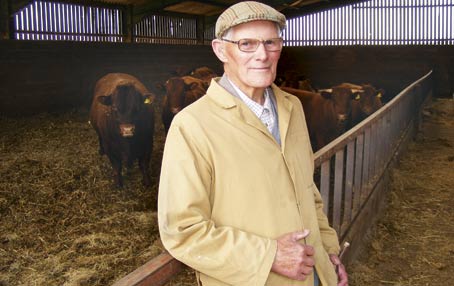 When the Pannier market was refurbished, Josie – as the longest-established stallholder – cut the red tape. Since her death four years ago, George has taken on that title and still runs his stall every Friday.

George’s favourite job on the farm was working the horses. The family had three teams of two grey horses and worked all their land with them. “We’d go out ploughing in the winter time and our neighbours would be singing. I used to walk 20 miles a day behind the horses – it was good exercise.”

Sadly, George’s beloved horses were not to last on the land. “What altered farming most of all was the war. We all had to plough extra land for food and that’s when the tractor came in.” The Fords bought their first tractor – a Fordson – for £350 in 1940. “It was sad, getting rid of the horses, but it had to be done.

“You’d get so cold on those tractors that when you jumped down your legs didn’t know what to do.”

But one traditional farming method has survived at Pristacott; the old binder is still in use each year to bind thatching reed grown on the farm.

Gardening is one of George’s lifelong passions and he tends to his garden every day of the week bar Sunday, and sells his vegetables at the Pannier market.

Although George’s older son, Stanley, took on the farm a few years ago, their stock were culled during the 2001 foot-and-mouth outbreak. “We lost 84 cattle, five fat pigs, 240 ewes and nearly 500 lambs. It was horrendous. There were four great heaps of sheep; it was one of the worst days of our lives.”

After the outbreak, seven farmers’ sons in the area, including Stanley and his own son Michael, decided not to continue farming. Stanley now lets the farm out to his cousin, although he and George still keep 63 pedigree Ruby Red Devon cattle, the same breed that they have always kept on the farm.

George’s younger son, Gordon, and daughter in law, Ann-Marie, now live with him at Pristacott, and Ann-Marie makes a range of jams and chutneys, which he sells at market.

So what does he make of today’s farming industry? “The trouble today is that there’s too much paperwork. They’re also borrowing too much money. You’re paying for it for the rest of your life, which is why there’s so much worry in farming. I’d like to go back to the old-fashioned way – we used to help each other and there was a good community spirit. Hard work doesn’t kill anybody, but worry will.”