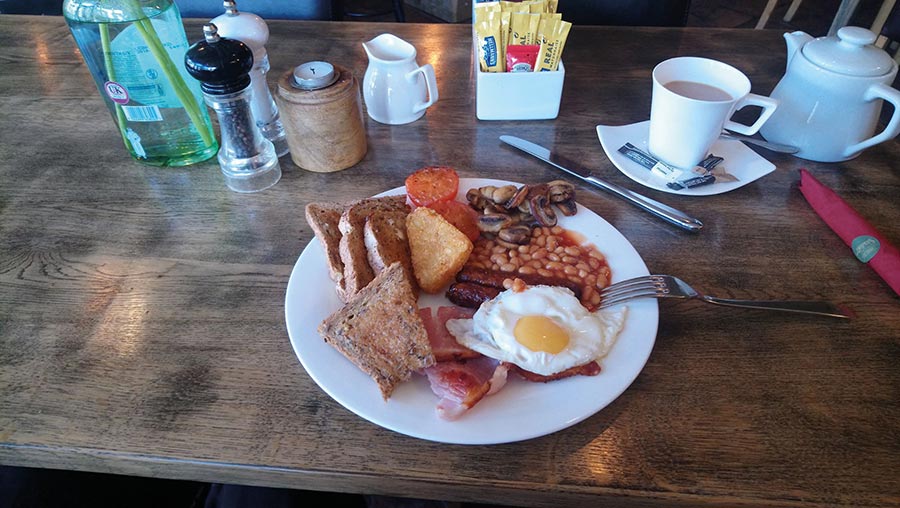 We farmers have to remember that (to paraphrase my old headmaster before any school trip) wherever we go, we are ambassadors for our industry. The trouble is, I feel I may have let you all down.

When I checked into another lovely little pub/hotel, this time in a small Essex town, I was asked by the receptionist what time I’d want breakfast.

The imminent dinner at a nearby golf club was likely to be loud and late, and da Friday nite yoof of Essex wuz already givin’ it large in their Corsas outside the hotel; it could be a disturbed night. “Can I go for about 8.30?”

I was right about the dinner. It was loud and late, and it was the small hours before I fell gratefully into a delicious heap of expensive duvets and pillows.

When I next opened my eyes, the clock said 8.50. There was slight panic, If I don’t get any breakfast, my day is ruined, and that’s on a normal day – never mind one when I’d be taking on the M25(S) again.

The hotel owner was in the bar, doing whatever must be done in a bar after a Friday night.

I apologised for being late, and asked if breakfast was still on. “Of course,” she said. “We guessed you’d overslept. Grab a seat wherever you like. Full English?”

“Rather,” I replied, sounding a bit too much like Hugh Grant. “But first I will test your piano.”

It’s a superstition I have; I cannot walk past a piano without having a tinkle, and there was a fine-looking grand in the corner.

I was a couple of bars into a random groove when, from my left, came “First I was afraid…”

As every keyboard player on the face of the planet knows, this can only mean one thing: time for a dramatic sweeping E7b9 arpeggio thingamabob.

Before you knew it, she and I had bashed out the first couple of verses of “I Will Survive” as if we’d been doing it together for years.

My breakfast tardiness was forgiven. “Are you the farmer who was speaking at the dinner last night?” she asked, with half an eyebrow raised. I confirmed I was, and headed for a seat in the bay window.

When the Full English arrived, it was straight out of the “meals for a stout yeoman anticipating 18 hours of hand-hoeing sugar beet” category, not “farmer due to do nothing more physical than sit in a traffic jam for three hours”.

It should have been delivered by forklift. It was visible from space. It had its own warp in the space-time continuum. The table legs groaned as it was set down.

I did my best, fellow farmers, I really did. I knew full well that I was eating to uphold the pride of our industry. I nearly achieved a clean plate, but surrendered to the pyramid of mushrooms and a second bit of fried bread.

“I thought you farmers always had a big breakfast,” said my landlady as she collected the plate. There was only one thing for it. I explained that a surfeit of mushrooms would result in severe intestinal gas-based fire risk.

No problem if I was out hand-hoeing, but in an enclosed car on the M25, the consequences of a random spark didn’t bear thinking about.

I’m paraphrasing again, of course, but my coarser version was enough to restore her traditional image of farmers – but, my word, it was a close thing.