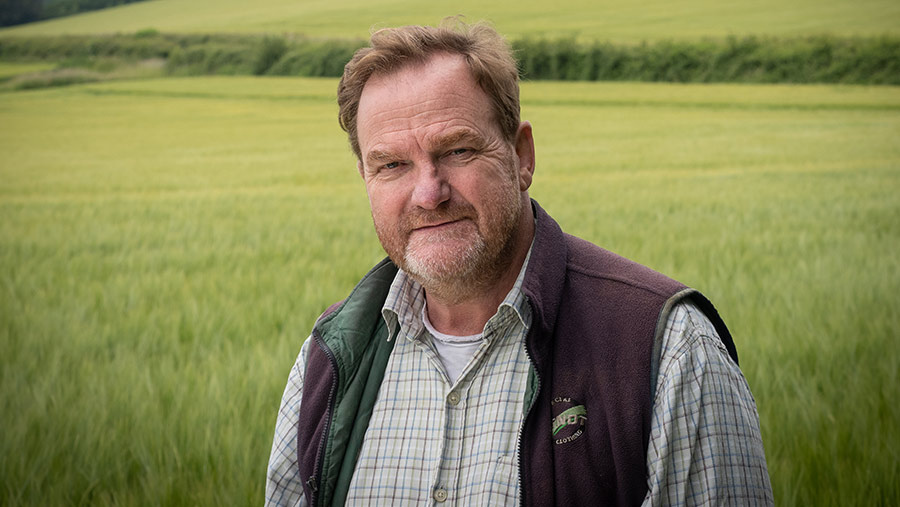 I have a new best friend. He’s called Oliver, and he’s nearly three. I met him last week when I was spraying.

I wasn’t actually “on the move” spraying – I was getting ready to fill up.

I had the Deere running, I’d finally sorted out the new “dead man’s seat” pto arrangement (the one that stops everything when you jump out for yet another pee) and was just connecting up the 2in pipe ready for another amazingly dry day’s Roundupping.

But I could feel I was being watched.

It’s a feeling I get a lot; my filling point is in full view of the first bit of the National Trust’s round-the-farm walk, and I’m well used to sensing disapproving holes being bored into my back. But not this time.

As I turned and headed for the chemical store, I saw a young mum trying to stop a wide-eyed and very excited toddler from rushing across the road and into the yard.

I turned 30 degrees to starboard and went out to say hello.

“Can Oli come and look at your tractor?” asked Young Mum, with a look on her face that wasn’t quite desperation, but certainly suggested that she was in for a torrid afternoon if I’d said “no”.

I know that face well from over 20 years ago.

“Of course he can,” I said. “Let’s just get you across the road.” That may sound an odd thing to say about a Hampshire lane, but we’ve got manic builders and log lorries flying through at the moment.

“Just hang on there for a moment,” I said, once we were in the yard entrance. “I’ll shut everything down.” Engine off, pto off, keys out, pipes disconnected, pathway cleared – perfect.

Oli’s eyes came out on stalks as we entered the yard and the rest of the machinery presented itself. “Whaddat?” he shrieked, pointing at the Horsch CO3.

I launched into a toddler-friendly explanation of radar metering and Jethro Tull, but didn’t get very far.

“Whaddat?” This time it was the old 3m Sulky, perfect for game strips. It was turning into a cross between Balamory and What’s in your Shed? on helium.

Once again, my short lecture (this time on the merits and pitfalls of buying kit on eBay) was cut short.

“Digger!” he yelled. A digger? Here? No, it was the hedgetrimmer, parked at the back of the yard. True, it’s yellow, has long articulating sections, and a lumpy bit at the end, so I decided it would be churlish to dispute the point.

When we reached the tractor, it was almost too much. Everything went quiet. I offered to lift Oli in, but Young Mum was ahead of me; she was up the steps, too.

It all went quiet; was Oli OK? Of course he was. He was sitting on the edge of the seat gripping the wheel, with a look of sheer bliss on his face. We’ve all been there

Finally, Young Mum lifted him out, and they set off to continue their walk. She was very grateful – Oli was just looking stunned.

“Come back at harvest and see my combine harvester,” I suggested. He grinned again.

“Godda hippo?” he asked. Come again? “Godda hippo?” I looked at Young Mum for enlightenment. “He likes hippos” she explained, as if it was the natural follow-on from talk of harvest.

“I’m sure we have somewhere,” I lied, and instantly regretted it; something tells me young Oliver is already counting down the days.

So if you happen to have a hippo spare, give me a shout. I’d hate to lose a friend.