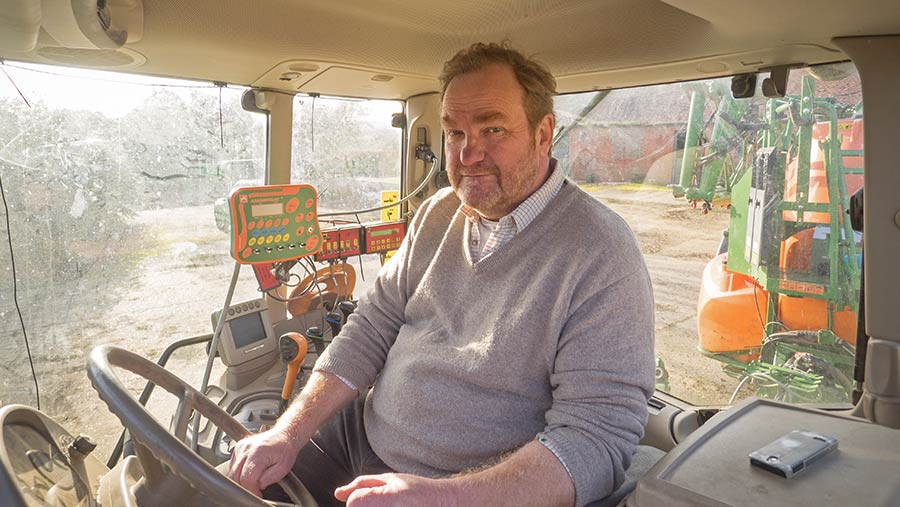 Just before Christmas, I donned hat, gloves and coat, and set off on the long walk out to fetch my tractor and drill.

They’d been parked out in the bean stubbles for endless weeks, waiting for that elusive weather window to get a few more acres in.

However, I’d just done a comprehensive review of all the long-term forecasts: BBC, Met Office, Accuweather, Fluffy the rabbit’s entrails – all the usual sources.

They all agreed on one thing: no drilling this side of Christmas, and possibly for the rest of the year. It was time to bring ’em home.

So I stomped off across Chalks, not in the best of moods. It was one of the two fields I had completed, and in the low December sun, it looked quite respectable.

It was unrolled  and unsprayed, but the slugs were noticeable by their absence (that’s why we love beans), there were no gaps, and the tramliners had behaved themselves.

From Chalks, I popped through the hedge into Clump, one of the heavy land bits I’d tried in October.

What looked like corpses littering the field were actually lumps of knotgrass that had refused to pass cleanly through even the Sprinter’s widely spaced legs – I’d had to pull up and do 360deg loops on the sown land, dropping “bodies” as I went.

As I reached the heaviest bit, progress became impossible, and I’d dragged the Horsch – by now with following wheels gummed up and immobile – back to the bottom of the field, locked up in a major huff and headed home.

Luckily, everything was where I’d left it. The Deere started fine, despite the long lay-off, with just a hint of a cough and a splutter, but I sympathised with the traditional “there’s a lot of it about”, which I’m sure made it feel better.

I even fired up the hydraulics and gave the seed metering wheel a turnover to check that the half-bag of Crusoe in the bottom of the drill hadn’t grown into a lump.

I folded up and headed home, press wheels slowly clearing as I went.

Was that the end of Cropping Plan B? (Plan A, with winter barley, was long gone). Cropping Plan C – spring crops only – was all very well, but what on earth was I going to do with all those tonnes of unused seed?

Only one answer: invest in some big second-hand grain trailers for vermin-proof storage, and they’re always handy at harvest, too.

Plus there’s nothing like the idea of a bit of machinery shopping to cheer you up on a short midwinter day.

Back to Plan B again

The drive home gave a clearer view of what I’d drilled so far, and much of the clay land was bare: the seed had rotted.

Again, I was cheered that I hadn’t bashed in 300 acres of wheat at all costs. It would all be gone by now. At least it was still in the barn.

As the sun set, seemingly just moments after it had come up, I backed into the yard and shut everything down again. A warm fire and some Hobnobs beckoned.

In the pile of emails (who am I kidding – I get five a day) was the monthly newsletter from some well-known arable consultants – the sort of newsletter we subscribe to for more than just the NRoSo points, honest.

It featured a list of latest drilling dates. Crusoe, it claimed, was the end of January. And Zulu – the other still-in-its-bags variety in the barn – was end of February.

“Well I never,” I thought as I snuggled under the space rocket duvet on the sofa. “Plan B is back on.”