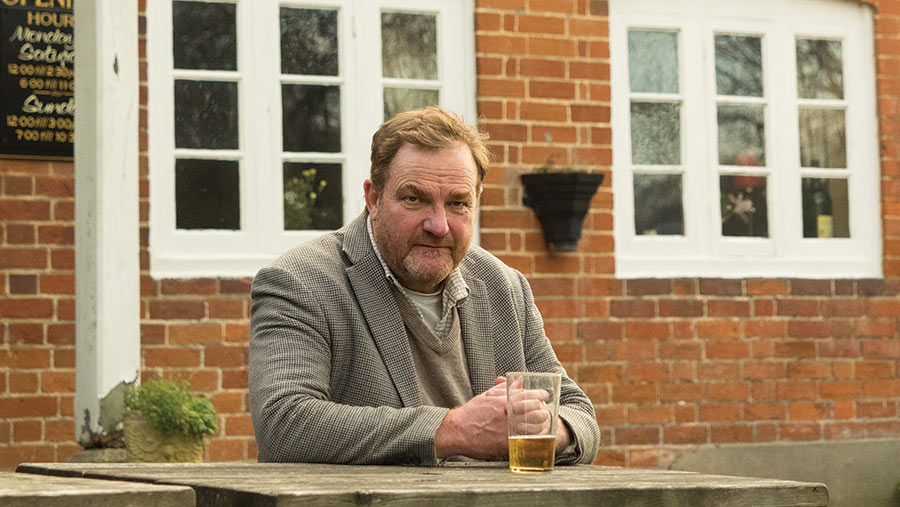 Over the many Tuesday nights that neighbour Robert and I have spent propping up the bar in the Jolly Flowerpots, we’ve witnessed a few bombshells.

Chips appearing on the bar menu, for instance. Mobile phones being allowed in – albeit reluctantly.

And who could forget the day that payment by card was introduced? (Hard to forget – we all ordered a single bag of crisps and mischievously produced cards. Well, we thought it was funny.)

But nothing compares to what happened a couple of Tuesdays ago.

We were just settling into another round – I had finished my peanut frenzy, so it must have been after the second round – and talk turned to the Basic Payment. “Got yours done yet?” asked Robert.

“Yup,” I replied. “Easier than ever this year. Especially now that nitrogen-fixing crops count even more towards the Environmental Focus Area. Easy peas-y.”

“Really?” said Robert, with a curious expression you only see on the face of old, wise farmers when they’re talking to idiot younger farmers.

It’s similar to the look when his pickled egg has gone down the wrong way – but subtly different. “Are you not going to spray any of them, then?”

Ah. That was the bombshell moment. I realised, mid-pint of Perridges, that I had completely and utterly messed up my BPS application. Somehow, the basic rule that legumes can only apply towards your EFA if they were completely unsprayed had gone right over my head.

Any excuses? None, M’Lud – save perhaps for the fact that having changed all the land use codes, I “generated” a new application form, and it said “EFA met”. Not much of an excuse, but it’ll have to do.

I checked my now-semi-approved phone: it was 14 May. I had one day (as Time Team nearly said) to get the forms sorted. Where do you start again, having submitted and signed off your BPS form? Oh well, I thought, as we launched into another round, that’s for tomorrow.

The climate catastrophe sent us yet another stunning early summer morning, so leaping out of bed very early to start BPS paperwork was an absolute joy.

By the time the Malinois had noisily interrupted Mr Fox’s morning stroll across the orchard, my list of queries for the RPA helpline was ready: how do I start again?

How do I “lose” peas/beans from my EFA? And how do I use instead the multitude of previously “unused” hedges if the RPA’s maps say they don’t exist? Unfortunately, the RPA didn’t open for an hour.

At 8.31am, I was number 24 in the phone queue – estimated waiting time, 37 minutes. Hazel and I took it in turns to endure the hideously edited loop of classical music, until, suddenly, at 9.05am, I was at the front of the queue. By 9.06am, I was chatting to a cheerful and fantastically patient RPA person.

Her answers were: just create a new application (they take the “latest” one, come midnight); click on “declare less EFA” and remove the legumes, and as for the hedges: measure them using the mapping tool, declare them on “land use”, and send in a sketch map and an RLE1.

So we did. It’s wasn’t hard, but it was long-winded. Almost every field is bordered with hedges and lines of trees, so our target was reached very quickly. Just before noon on 15 May, I clicked submit – again.

My new application was “accepted”. Shortly after lunch, I was back out in the sprayer – in the beans. Funny old game, 21st-century farming.