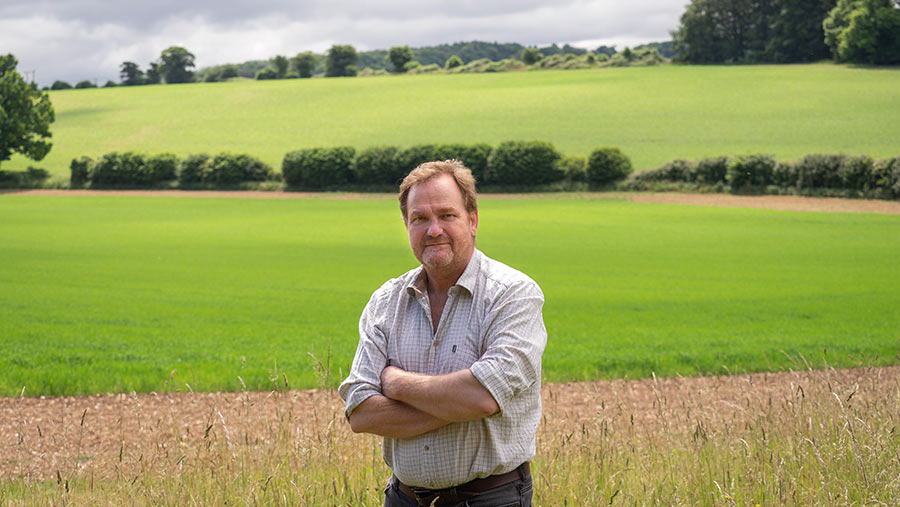 There I was, standing in the Drier Yard, staring out over the peas in Blackhouse Road, wondering where all the pigeons were, when a large black estate car drove in.

I’m well used to odd things going on down there, so I hardly turned a hair when out jumped a German archaeologist and her huge snowy-white Alsatian.

I didn’t know she was German to start with, of course, but I can soon spot the accent of my forefathers, and once I’d tried my favourite phrase on her (“Nicht in diesen Hosen!” – which is something to do with sodium chlorate-soaked trousers exploding in New Zealand in the 1930s, but that’s a story for another day), we got round to establishing what she was up to.

It turned out that she was doing a PhD on Bronze Age monuments and artefacts in the Western Weald, and the gentle valley that stretches east from the official source of the River Itchen (and right through the central belt of my farm) is proving to be a bit of a significant area – and thereby justifying the otherwise inexplicable inclusion of Hinton Ampner in “the Western Weald”.

She then produced an extraordinary document: a Lidar scan of the area. “Lidar” is a relatively new archaeological tool: a plane-mounted laser fires a million billion pulses at the ground, and measures the reflections.

The clever bit is that in wooded areas, a million or so of those million billion pulses penetrate the foliage, hit the ground and make it back to the measuring device.

So not only do you get a staggeringly accurate image of every ditch, hollow, barrow and bank, you also get to see the land completely stripped of greenery.

This technology is revealing archaeological wonders all over the world – huge, previously unknown Mayan cities in Guatemala, for instance – but I couldn’t believe that our little patch of Hampshire would have any secrets at all, never mind 2,000-year old temples, after centuries of mapping and measuring. (Mind you, those rumours of human sacrifice up West Meon way still circulate.)

The real reason for the archaeologist being in the Drier Yard became apparent: out in Drier Field, not 50 yards from where we were standing, the Lidar analysts had spotted what they thought was a Bronze Age feature.

There it was, on the scan, as clear as… well, something that wasn’t terribly clear at all, but there was definitely something.

Hence the “field trip” to explore further, and also her delight in stumbling, by complete chance, across the farmer.

We stomped out into the spring barley, and with a favourable eye and quite a bit of faith, it was just about possible to convert what I’ve called for 35 years “a heavy brow” in the otherwise chalky field into something else.

Especially as two more “heavy brows” elsewhere had also been picked up by Team Lidar as features.

Over tea and Hobnobs back at the farmhouse, we pored over the scan with Dad’s magnifying glass. Never mind the Bronze Age stuff: what were those perfect grids out in the pastures? What’s that strange enclosure in the Hangar?

The multitude of small holes in the woods – were they starter pits for the thousands of huge chalks dells that also litter the mid-Hampshire landscape?

And look at those terrifying corrugations in Kilmeston Road – oh, never mind, that was the Wessex Historic Tractor Club ploughing match.

It was a bit of an eye opener. You think you know your bit of land, after decades of turning every square inch – but that clever Lidar suggests otherwise. Now, if they could tweak it to spot pigeons…