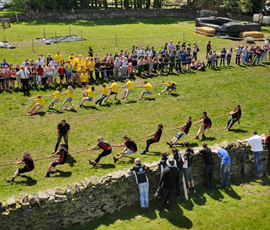 The event, hosted this year by the Dent family at Beamwham Farm, Haydon Bridge, is the biggest day in the county’s YFC calendar and included more than 70 competitions.

“This is a day out for all the family and many of the classes on show promoted the 1950s, as Shaftoe recently celebrated their anniversary,” said rally committee chairman Peter Forster.

The Rally Shield was awarded to Whitley Chapel, with Shaftoe taking the runner-up spot.

Northumberland YFC county chairman James Walby said: “The rally is all about our members taking part and pulling together as a team. By doing this, they gain experience and it is amazing to see members grow in confidence every time they take part in the rally.”