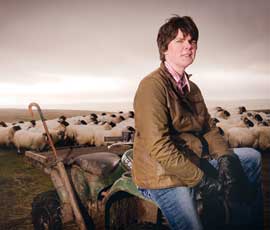 As we hear of drought conditions in the South, I can report that the going on our farm is heavy (sloppy in places).

Everything outside looks brown – particularly because the field ground has been liberally covered in muck and the army are churning up the clarts on the hill and the roads. Our tapwater is brown too. It’s been very rainy here – not Cumbrian levels of deluge but still wet.

After months at home, Jake seems to have been at the mart quite a lot recently. He sold some Angus steers last week and an old cow yesterday. It’s an odd thing, but when he goes off to the mart with a single cow I always have the sneaking feeling he’s going to return with a handful of magic beans. That would be a particular disaster on our farm as we don’t have the soil depth to support a beanstalk. Fortunately that didn’t happen this time.

In fact, he got more than he paid for her as a bulling heifer and she has produced nine calves in between. So that’s not bad.

Jake seems to relish going to the mart as it gives him lots of time to sit in the canteen having a large lunch and chatting to people. I don’t share his enthusiasm. There is just too much hanging about somewhere cold waiting for something to happen. Now I come to think of it, quite a lot of the time I spend helping Jake on the farm seems to be like that.

Clearly, though, many people regard marts and auctions as a source of entertainment. I heard Chris Evans on the radio the other morning talking about how he liked to go to classic car auctions and just write down the price of each lot for his records. That’s exactly what a lot of people do at tup sales. Someone is now tapping into this market by selling DVDs of big events. Yes, you can now relive the excitement of Hexham Blackface tup, ewe and ewe lamb sales in the comfort of your own living room, or even better, someone else’s living room.

In fact, Jake is going over to one of the neighbours tonight to view last year’s event. We’re not told if out-takes and foreign-language subtitles are included in the package. However, I suspect they may just fast forward to the bit where our neighbour sells his tup for a colossal amount of money and keep replaying it on loop.

Also this week, we attended the Glendale Agricultural Society Annual Quiz. Seventeen teams were attracted to Wooler by some rather good prizes, a shepherd’s pie and pea supper and the opportunity to be rigorously questioned by the voice of Glendale Show, Ronald Barber Esq.

Of course in this Olympic year it is important to bear in mind that it is not the winning but the taking part which matters. It’s only a bit of fun. Nobody takes it too seriously. Nobody cares about the result. No Siree. However, reader, as it turns out, our team won.

Our team comprised Jake, my sister Sarah, my brother-in-law Angus and me. Some might describe it as a crushing victory achieved in the context of the most difficult set of questions ever posed in a Glendale Quiz, but I couldn’t possibly comment.

The Renners were gallant runners-up after a sudden-death play-off for second place. For completeness, I should report the team that has a tendency to finish last were once again awarded a set of wooden spoons. This was unfortunate as it subsequently emerged another team actually achieved a lower score this time, but the chairman had just naturally assumed…

Our prize includes tickets for Kelso Races, a place we haven’t been to much since having the children.

We used to go quite often and always found it good fun and very sociable. Invariably Jake seemed to know a large proportion of both the Borders racegoers and (somewhat alarmingly) the bookmakers.

I always used to think that two of the best things about Kelso Races were:

• the real coal fire in the ladies’ cloakroom; and

• the port hot toddies available in the tin shed bar.

This probably says something about the prevailing weather conditions – bracing. In my opinion, this is the proper way to experience National Hunt racing. None of this namby-pamby being-entertained-in-a-box nonsense. You need to feel that you have battled against the elements and virtually qualified for a Duke of Edinburgh Award to really appreciate the sport. The tin shed bar used to be ideal for these purposes. It had no doors, no heating, no seats and a concrete floor – a bit like having a drink-up in a bus shelter.

Yet everyone used to meet there and exchange bad tips. Sometimes you would see the owner, trainer and lad all in the bar together and wonder who was holding the horse. I look forward to finding out if things have changed. I hope they haven’t.

Elizabeth and husband Jake – who have two children, Julia and Archie – farm 235ha of hill ground on the Otterburn Firing Range in Northumberland.

• Brought up on a dairy farm, Elizabeth is an accountant by training, with a background in corporate finance and business appraisal.

Read more from Elizabeth on our dedicated page.