It’s been the source of a huge amount of discussion and quite a few arguments. Our bid to establish Farming’s Greatest in six categories – innovation, figure, machine, decade, view and cock-up – certainly caught your imagination.

We asked you to help us to identify the contenders from the past 75 years (it seemed the most fitting period, as FW is celebrating its 75th birthday) and you inundated us with suggestions.

Readers’ contributions were informative, thought-provoking and sparked lively conversation on our website forums (not to mention over kitchen tables and in village pubs). From the suggestions that flooded in, we drew up a shortlist and then handed it back to you, our readers, to pick your overall six winners.

In some categories, clear winners emerged.

In innovations, for example, you were unequivocal that the three-point linkage was truly special and had changed agricultural practices like no other.

This invention, also known as the Ferguson system after Harry Ferguson who pioneered it, took 55% of the votes in its category. And like all truly great innovations, it made people wonder how they managed before. Basically, it transformed everything. It beat the mobile phone and the internet into second and third place; they garnered 19% and 16% of the votes respectively.

Indeed, Ferguson turned out to be a name linking more than one category – in the Greatest Machine section, for example, the Ferguson TE20 tractor emerged as the winner, with 24% of the vote.

With few areas of farming untouched by the mechanical revolution – and virtually the whole industry transformed from a manual to a mechanised one in the last three quarters of a century – the machine category was hotly contested. Another rural icon, the Land Rover Defender 90 tdi, ended up a close second, taking 22% of the votes.

However important machines are to the countryside, so too are people – and a clear winner also emerged in the Figure category. The one generic option on the shortlist – the Farmer’s Wife – polled 49% of the vote (Harry Ferguson also popped up in this category, incidentally, nabbing second place).

Another topic that gets farmers talking (and vexed) is cock-ups – particularly when they involve government (as quite a few seem to).

Like all industries, we’ve had our share over the years and everyone’s got a view on which was the biggest. You told us about mistakes, acts of incompetency, greed, shortsightedness, lack of planning, lack of management and just downright stupidity that have cost farmers not just money, but aggro, bad feeling, animal lives and any other losses.

You felt the foot-and-mouth outbreak at Pirbright in 2007 was the most horrendous cock-up; a disaster that shouldn’t have happened.

After casting your mind back to the at-times depressing topic of cocks-up, you were obviously glad of some light relief and enjoyed looking at the many photos that were submitted in the View category.

We knew this would be an interesting one, with the countryside full of staggering views – ranging from those with rugged charm or picture-postcard beauty, to those that epitomise the type of agriculture that characterises a region or shows an iconic farming scene.

And finally, as an industry with a strong sense of tradition and history, we were also keen to establish what the greatest decade was. It was a difficult question because a lot can happen in 10 years, but it turned out that you thought the 1970s was the best (33%), with the noughties coming second, with 26% of votes.

Over the coming pages, you can read citations for the winners in each of the six categories. And if you still disagree, you can go to our website at www.fwi.co.uk/greatest and tell us what you think.

Of all the thousands of mechanisation developments during the past 75 years, the one that made the biggest impact on farming efficiency is the Ferguson System.

The first commercial version of Harry Ferguson’s hydraulically operated three-point hitch arrived in 1936 and now, after 73 years and the addition of a few mainly electronic refinements, it remains the standard implement attachment and control system on almost all production tractors in the world.

Its introduction was a huge step forwards, allowing the tractor and implement to work as an integrated unit for the first time. It provides more precise depth control for jobs such as ploughing, working in a restricted space is easier and it can significantly boost traction efficiency, particularly in difficult conditions where wheel-slip is a problem. 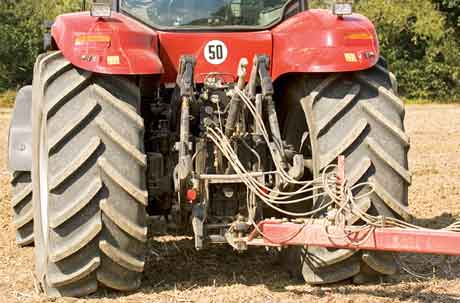 Operator convenience and safety were not priorities in the 1930s, but the Ferguson System benefited both. Operating the hydraulic system is much easier than manually raising an implement out of work, and there are important safety benefits because the three-point linkage and the automatic draft control reduce the risk of a tractor rearing backwards while pulling an implement – previously a major cause of death and injury on farms.

On 6 July 1946, the first Ferguson TE20 tractor rolled off the line at Banner Lane, Coventry, starting production of the Little Grey Fergie, which changed tractor design forever and revolutionised power farming across the globe.

Compare a TE20 with other tractors of the same era and it is clear to see just how far ahead of its time it was. The antiquated ideas on its heavy, bulky counterparts had more in common with small steam engines, from which they were developed, than modern tractors.

More than 516,000 TE20 tractors were built and exported worldwide. And many of these are still working today, helping to mechanise operations on small farms.

But Harry Ferguson’s vision was not just simply to sell tractors. “Agriculture should be the first industry to be modernised and not the last,” he said.

His plan was to lift people out of poverty. In 1946, at the initial meeting of the Food and Agriculture Organisation, he spoke of his World Plan and “price reducing system” that allowed farmers to “reduce costs not just on a beautiful level field or in a particular crop, like wheat, but everywhere, under all conditions, all over the world”, he explained. 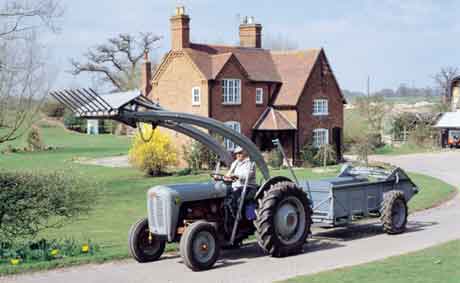 Poverty, sadly, still remains – but the introduction of the TE20 tractor undoubtedly helped in the battle to combat it.

OK, so the 1970s hold some terrible memories for me: Puberty, school friends trying to be punks, Boney M, and my sister Helen’s tie-dye outfits. But farming memories are fantastic. The post-war production philosophy was at maximum momentum, machinery and chemical development meant yields surged, with prices matching them.

You could burn stubble (and thus never saw a slug). You could get cross with off-footpath ramblers. If someone landed in your field it was a polite glider pilot and not a militant money-grabbing balloonist.

No one had heard of set-aside, IACS, SPS, HLS, the Environment Agency or Natural England.

Hot summers and cold winters were nothing more than natural climate variation, not something we’ve all got to pay a fortune to combat – in vain. The farming minister tended to be of country stock, not an urban veggie.

Farmhouse gardens sprouted tennis courts and swimming pools. Tractors and Land Rovers were replaced as often as we change oil filters these days. Tenant farmers put on ties and lived like gentlemen farmers.

And, most significantly of all, when clipboard man arrived in the farm office, his mission was to get you to grow more, not less. Days we’ll never see again.

Virtually every farm has beautiful views and, let’s be honest, we’re all a little biased when it comes to our favourite (country people can be surprisingly soppy when it comes to places). Images that epitomise iconic activities popped up time and time again – gulls behind a plough, sheep in a meadow, beautifully straight tramlines – but this image took the top spot, claiming 30% of the vote.

“An eager dog, waiting for the off, contended healthy stock enjoying the new grass and an early-morning mist – it’s a sight that marks the perfect start to a glorious spring day,” said Heather Peters of Sherford in South Devon, who took the picture. 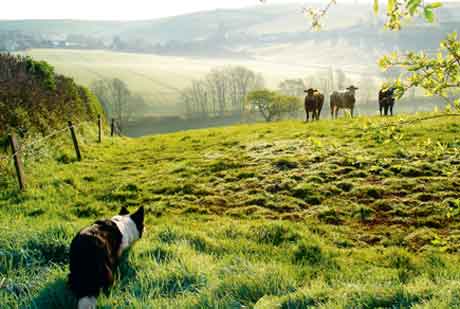 Sadly, Fly, the dog in the picture, died not long after the photo was taken, so it’s an image the Peters now treasure.

The term “farmer’s wife” is a controversial one.

Some people take pride in being referred to as one; others hate it, considering it demeaning to identify someone merely by who they are married to.

But looking back over the past 75 years, the period over which the Greatest series reflected, it’s been a term in common usage and, as a role, one that soon emerged as the front-runner in the Figure category.

While what’s involved in being married to a farmer has changed beyond recognition in the past 75 years (let’s face it, it’s changed massively in the past 10 years), the role of farmer’s wife is one for which people have a huge amount of respect. 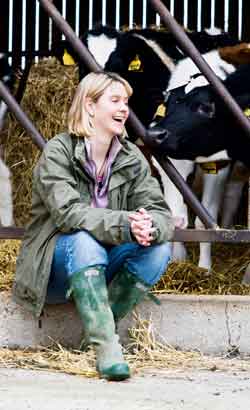 For many years the backbone of the farm, the brains behind the brawn, keeping house and raising children (and doing their fair share of farm work), the farmer’s wife went largely unappreciated.

More recently, those married to farmers are likely to work off-farm, run a diversification (which may be crucial to the farm’s fortunes), be an unpaid accountant, as well as bearing the brunt of the work when it comes to home and family.

“Foot and mouth” are three words that send a chill down livestock farmers’ spines.

It will probably take decades for the horror of the 2001 outbreak to be forgotten. More than 10m animals were slaughtered as a result of the outbreak and the government only managed to bring things under control after it called in the army.

Yet it is the smaller 2007 F&M outbreak that was voted the biggest cock-up to affect farming over the past 75 years, taking 24% of the vote. Why? Because there’s a sense that while the 2001 outbreak may have been mismanaged by the government, at least it wasn’t directly responsible for causing it. 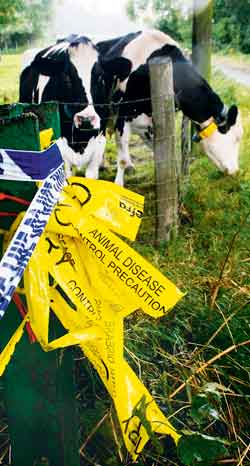 The 2007 outbreak, however, was caused by leaky drains at DEFRA’s Pirbright research facility in Surrey, which resulted in a live F&M virus being pumped into surrounding watercourses.

It seems indefensible that there were such slack arrangements in place given the nature of the virus that was being handled by the organisation. And it is staggering that farmers have never really had an apology from DEFRA, despite the fact that the outbreak cost the industry tens of millions of pounds.

The 2001 outbreak was voted the second-biggest cock-up, collecting 21% of the vote, while banning hunting and the ongoing debacle with TB and badgers were joint third, each claiming 16% of the vote.