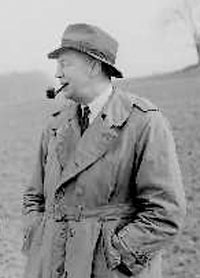 Arthur Street died in 1966, seven harvests before I was born, but I have been enthralled and inspired by his writing since I was introduced to it.

His earliest work will soon be a century old, but the opinions are as relevant today as when they were first recorded. His books are a chocolate box of knowledge, sense and companionship for farmers of any age. Whenever the trials of this business get me down, I head for the bookcase (via the wine rack, of course).

Street was a Wiltshire farmer who wrote for Farmers Weekly for 30 years. He joined  the magazine shortly after it was launched and wrote a column every week until just before he died.

“What could a modern farmer possibly learn from him?” you might ask. Well, it looks to me as though this farming lark is a cyclical business. There are cycles – climatic, economic or social – recurring constantly over varying timescales. Advice from your elders is the breakfast of farming champions.

So who better than Street could one discuss the current economic crisis with? His view on life was formed during the farming depression of the 1920s and 1930s. He epitomised the self-reliance and fighting spirit that today’s farmer needs to have to survive on the mean streets of the global marketplace.

Street was also one of the finest communicators that agriculture has ever produced. His opinions were a model of reason and his use of the English language was joyful in its colour, clarity and honesty. His practical wisdom engaged urban readers (he called them “townsfolk”) just as much as rural ones.

There is a subtle difference between a farming writer and a writing farmer. Street was definitely a writing farmer. He wrote from the heart of the industry and celebrated the quirky details of the rural way of life. He had an innate understanding of the farming psyche, so knew when farmers had a genuine cause for grievance and when they were complaining for effect. He sometimes relished criticising the ways of his peers, but he clearly had the best interests of the industry at heart.

The changes to agriculture that you and I assume to be modern phenomena – such as mechanisation, the relative cheapening of food, the urbanisation of the population and the increasing reliance on imports – were well under way during Street’s lifetime. He predicted the impact that they would have on the countryside. In a passage written in Farmers Weekly half a century ago, he expressed a view that couldn’t sound any more contemporary: “Well, this nation must choose – it can either have its countryside as a badly-farmed museum and recreation ground for townsfolk, or as its most important national industry. It cannot have both.”

As industrialisation changed the world, Street campaigned for a respected, valued and prosperous countryside. He wanted farms to be regarded as equal to other businesses. He had faith in the ability of individual farmers to adapt – a rather avant-garde position in the post-war era of government intervention. His was a lonely voice when he asked for little state interference or warned about accepting the bureaucrat’s pound.

Street’s independent views were shaped  by his early life. He was born with his feet facing the wrong way and, as a child, endured many painful operations and wore leg irons. This possibly explains why his views were more liberal and fully-rounded than those of your average Victorian farmer.

This is not to say he was a modest man, he clearly wasn’t. He found it hard to settle into a  role on the family farm (which was already prosperous and well-staffed, by all accounts) and eventually he decided to leave to work in Canada. Gap years were rather uncommon before air travel and this was a bold but influential choice.

The experience of agriculture on a large scale with poor labour availability was profoundly influential to Street. He admired the Canadian approach and it made him pragmatic about international trade. Consequently his later writing, while always patriotic, is never jingoistic.

He returned to Wiltshire a wiser man to run the family business in the 1920s and had a few successful years before the depression began at the end of that decade. He had to shed most of his staff and relinquish land.

Street managed to retain his business  by changing to an outdoor milking system and selling directly to the public. He would start milking his 70 cows at 4.30am and then, in a  van with “A. G. STREET, OPEN-AIR MILK” on the side, he would drive around Salisbury finding  new customers. This cheap, welfare-friendly, market-led behaviour sounds sensible to us;  it was actually rather enlightened in 1927. He resigned all his club memberships, gave up his country pursuits and, for seven days a week, focused on his business. He came close to bankruptcy at several points.

This is why Arthur Street is a modern hero. When faced with cheap imports, a shortage of labour and low commodity prices, he adapted to survive. Although he advocated ever afterwards that farmers should engage with consumers in the same way, he clearly hated this period of his life and found retailing to be a humble profession (oh Arthur, that you had lived to see Tesco).

Street never forgot the depression when the food shortages of the Second World War led to an era of protectionism. His warnings about the dangers of cheap food and a disconnected consumer sounded anachronistic and were not properly appreciated until nearly 40 years after his death. As we battle with rising input costs, the prescience of his views on the value of good grassland may soon be equally appreciated.

In the columns he loyally contributed to Farmers Weekly for three decades, he employed beautifully-constructed analogies to explain his viewpoint and, in a pre-Twitter age of communication, he was an important opinion former. He campaigned on several issues and was particularly proud of his part in the abolition of the four-bushel sack and the dehorning of cattle.

Farmer’s Glory, written in 1932, is arguably his greatest work. It is the seminal text on the subject of agriculture (unless you have the stomach for Cobbett‘s Rural Rides) and is one of the most important historical records of the impact of industrialisation on the British countryside.

He wrote many other well-respected novels, some became part of the school syllabus; others, such as Strawberry Roan, were turned into films. You can still find his books in secondhand bookshops or buy them via the internet through eBay, Amazon or Faber.

Street also went on to become a national celebrity as a panellist on Any Questions on the Home Service. Then, as now, it was unusual to have a proper farmer celebrity and his popularity was clear evidence of his wisdom and good sense.

Like most interesting men, Street was defined by his struggles, but he lived a life that any countryman would be proud of.

Through his writing, he has preserved a corner of rural Britain forever. Few people can lay claim to a better legacy.