Thanks to everyone who entered our writing competition.

We asked you to tell us why Christmas Day is so special on a farm and we were inundated with pieces – from the factual to the funny and the heartwarming to the happy.

Some were true, some were inspired by real-life events. Here is the winner, runner-up and extracts from some of the other entries we enjoyed.

See also: A day in the life of Farmer Claus 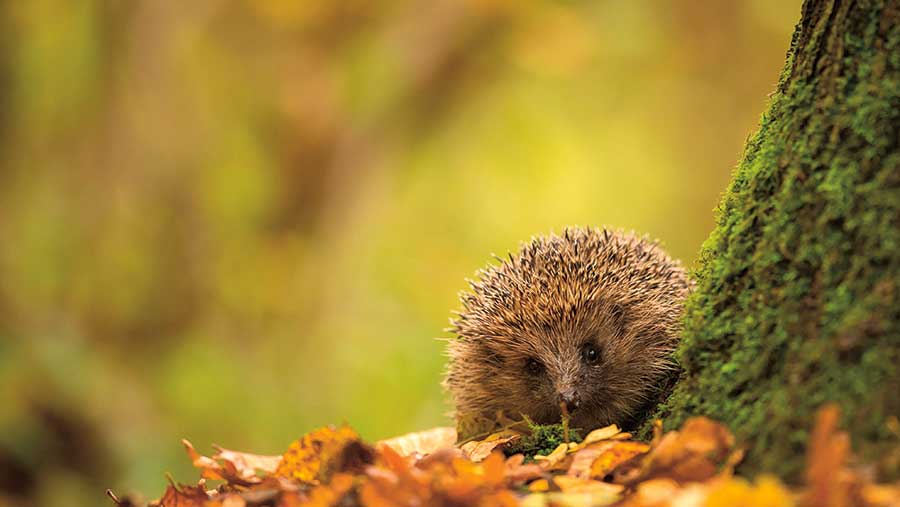 Once upon a time, in a small village in West Yorkshire, lived an elderly couple.

They lived a happy relaxing life in a big house, with nice gardens and beautiful views over neighbouring farms.

It was mid-November and the first of the snow had arrived, and a thin dusting covered the lawns.  Footprints from the grandchildren were visible on the lawn as they had been running up and down trying to catch the tiny snowflakes falling from the wintery sky.

As the elderly man was walking up the terrace watching the grandchildren playing in the snow, he noticed some footprints that were too small to be a human.

He called his wife and the grandchildren, but no one knew what these footprints were, so they started to follow the footprints to a trap that the elderly man had to catch vermin.

In the trap was the animal that had made the tiny footprints – a curled up spiky ball. Everyone went silent and watched slowly as the small spiky ball started to open up into a small brown hedgehog.

They brought it back to the house and set it down in front of the Aga. The lady put the kettle on and made a big pot of tea as the grandchildren sat and watched the hedgehog; the children wanted to name the hedgehog but, as the couple didn’t want to keep it, they did not allow them to.

However, the lady had some sparkly nail varnish so painted the tops of a few spikes so that in future they could recognise the hedgehog.

That night, they put the hedgehog into a small cardboard box with some hay and the elderly man took it to the woods, where he said farewell as the small creature scuttled off into the undergrowth.

The nights became colder, the days shorter – there was still no sign of the hedgehog. The grandchildren were now starting to worry about the friend they had watched in front of the Aga and kept saying: “We have woolly hats and gloves on, yet the poor hedgehog has nothing.”

One night, they even sat up praying for the hedgehog to be OK, as the elderly couple sat in front of the open fire and snow fell heavily outside.

In the morning, the grandchildren couldn’t wait to check the terrace for fresh footprints from their little friend. To their amazement, in the snow, there were once again tiny footprints.

The couple came up and there, once again, was the hedgehog with a bit of a sparkle behind its head.

Sadly, the children knew that to keep it inside was not the right place, so when the man said he was going to return the hedgehog, but to a spot farther away, the grandchildren said their goodbyes and hoped it would be OK.

The man set off, once again, into the wood but climbed further through trees and prickly brambles, over walls and across small streams, where he found a pile of logs. He left the hedgehog there, but before letting it go again, he whispered: “If we don’t see you before, Merry Christmas – I hope you find where you belong.”

Christmas morning came and the whole family were staying over. The grandchildren opened the presents that Santa had left, but remembered the small hedgehog.

They put on warm clothes and went up the terrace. The family inside heard: “Quick, come look at this,” and ran outside, where they saw the small brown but slightly sparkly hedgehog.

They took it into the house and put it down by the Aga and gave it some food. The children said: “As another small present, can we name him?”

The couple agreed to name the hedgehog and everyone agreed on Sparkle.

When everyone had gone, the man sat down in his comfy chair and gently said: “Merry Christmas, I think you have found where you belong!” 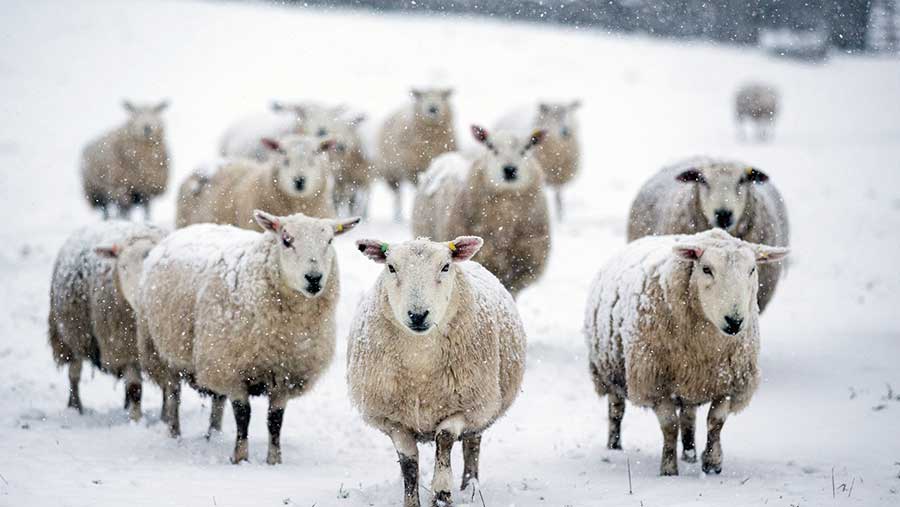 Christmas Day dawns like any other day on the farm, but there is a feeling of excitement in the air and a sense of hope for what the day will bring.

It is a day for contemplating the events of the past year and for anticipating what the next one will bring.

When I was younger, though, Christmas Day was all about having the maximum amount of fun and it was always full of laughter.

It would inevitably involve getting up a time when even the cockerel was still dreaming about what Christmas gifts he was getting from his hen friends.

My brother and I would race down the stairs whooping with delight to find out what “Sion Corn” (Welsh for Father Christmas) had brought for us and wondering whether he had safely navigated our ancient chimney.

Upon opening the living room door, we would survey the pile of presents glistening under the Christmas tree.

The next hour or so would involve a frenzy of opening our presents and playing with our toys while consuming as much chocolate as was humanly possible before Mum and Dad awoke to milk the cows.

Christmas Day then and now is like any other day on the farm as the animals have to be tended to. When we heard the familiar creak of the stairs, we knew the parents were awake to start the busy day ahead.

We would try to hide the remains of any chocolate wrappers, but Mum always knew what we’d been up to and we always had the lecture about the unsuitability of eating chocolate at that time of the morning. But Dad would always find it hilarious!

The various jobs of milking and feeding the cows and calves would take place, with us excited children allegedly helping with our Santa hats twinkling merrily.

Our favourite task of feeding the calves would involve the milk slopping across the yard with our exasperated Mother trying to conceal her laughter at our Christmas enthusiasm.

Later in the morning, while Mum was preparing our lunch, Dad would take us for a walk through the sheep and I would shout “Nadolig Llawen” and “Merry Christmas” to any sheep that would loftily raise their head.

I was always convinced that Sion Corn had visited the sheep and that their presents were carefully hidden in the hedges away from our prying eyes. I was sure that once we were a safe distance away their festivities would begin.

Christmas dinner was always a feast with a turkey and all the trimmings, with roast potatoes being a particular favourite of mine.

The meal would be accompanied by a glass of fizzy pop. My brother and I were always led to believe by Mum that fizzy pop was only allowed to be consumed at lunch on Christmas Day and that it was against the law to drink it at any other lunchtime throughout the year.

Christmas pudding would follow, accompanied by an extreme amount of homemade custard. After consuming at least a month’s worth of food, the whole family would troop out for a long walk down to the river. On this walk, we would be accompanied by our trio of canine friends – Ben, Oscar and Max.

I would always try to imagine what Sion Corn would bring for each of our four-legged friends.

After careful consideration, I decided that Ben would have The Complete Works of William Shakespeare because he was the most studious of the dogs. Oscar would have a new cushion because he was always sleeping, and Max would have a year’s supply of balls as he had an unhealthy obsession with them.

Humans and dogs alike would enjoy these walks in the bracing cold air, with the dogs running excitedly ahead chasing their imaginary friends and us children trying to keep up with them but to no avail.

The rest of the day would pass with yet more eating, playing with our new toys and Mum and Dad would be busy milking the cows.

Day soon turned to night and after hiding our yawns because we did not want the day to end, we would climb the creaky stairs to our bedrooms.

As I snuggled down in my bed, I was convinced that I could hear music from the fields and I drifted off to sleep smiling as I knew the sheep were having their party. What a way to end a very special day. 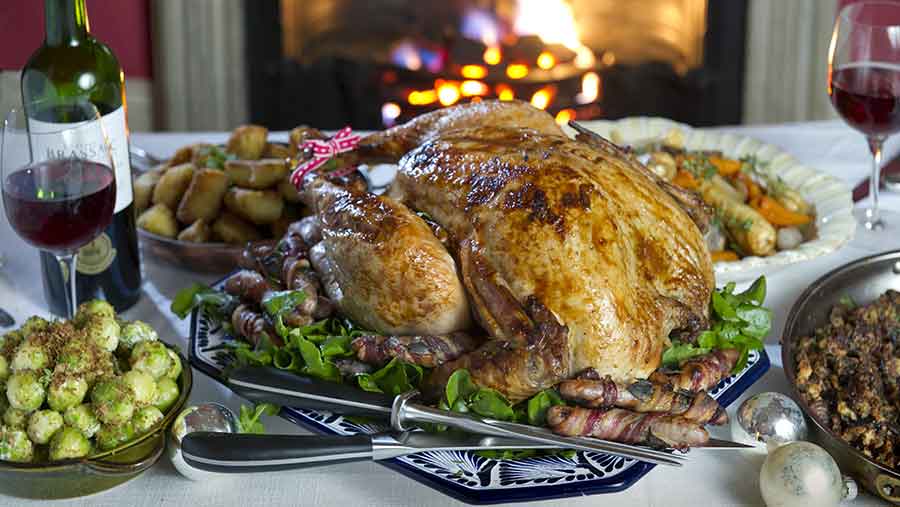 We know, as all dairy farmers know, that if something is going to go wrong, it will go wrong on Christmas Day.

In the past this has taken the form of coming out on Christmas morning and finding two tractors with punctures.

Another time, coming home in the evening to milk and finding the rain water running through a hole in the roof, straight into our electric box – not an ideal situation.

In the week before Christmas, therefore, we try to anticipate what may go wrong and fix it, instead of thinking that it will probably be all right till the new year.

On Christmas Day there was always too much to eat, and there would be fights at the table over the roast potatoes.

I soon learned that if I ever dropped any of my food, I was never to go under the table to pick it up, not because of germs, but because by the time I got back in my chair, at least one of my potatoes or pigs in blankets would have been snatched by an older sibling.

Growing up on a farm in the 1970s, my Christmas used to begin in August, with the arrival of a large flat cardboard box containing day-old chicks, which we reared for Christmas.

Oh, the pleasure of those innocent chicks, the fragrance of sawdust and corn, the achievement of keeping them alive until Christmas.

Of course, they soon grew and despite my tender loving care, they would attack my legs whenever I went into the shed with corn.

There was a time when I loved Christmas, when I was a little and everything was different. In those days Christmas didn’t start in September as it does now.

There was the lead-up to the end of school term, making calendars and Christmas cards, at home we would put the decorations up on Christmas Eve, so they were all fresh and lovely for the day itself, and gave less time to gather dust and for the cats to play with the baubles on the tree.

The next day, waking in our icy bedroom, we would savour the delicious thrill of realisation that Christmas day had finally arrived, and scurrying to the foot of our beds would find the exciting knobbly stockings, with their sugar mouse, chocolate coins, small toys and novelties and a tangerine in the toe.

By then our parents would have finished their first chores and we would all have a special cooked breakfast. Then there was church with its joyous carols and palpable goodwill, and Christmas dinner, followed by the bliss of present giving.

The rest of the day seems a happy blur after all this time, but it involved walking the dogs and tea with the glorious white iced cake and its tiny figures as a centrepiece, and ended with Mum reading to us, in front of an open fire, from one of the books we had been given for Christmas. I still treasure my copy of the Just So Stories she gave me one year.