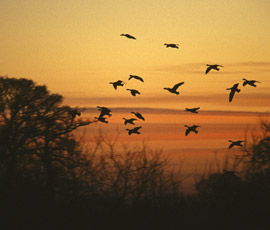 A cull of more than 5,000 geese is to go ahead in Scotland to protect grassland and crops from damage.

The growing population of resident greylag geese in Orkney doubled from 10,000 birds in 2008 to more than 21,000 by August 2012. This is causing serious damage to arable and grass crops, according to the cull organisers Scottish Natural Heritage (SNH) and its advisers the National Goose Management Review Group.

The cull will begin in August and continue through September before migratory birds from Iceland arrive in October.

It will be carried out under licence by experienced local guns.

Geese taken as part of the pilot project will be recorded and population levels monitored in the summer.

The aim is to keep the population down to reduce impact on farming while preserving the species’ conservation interest, a spokesman for the SNH said.

Gail Churchill, SNH’s Orkney operations manager, said: “We are responding to the concerns of local farmers and land managers and we are also committed to ensuring that management is controlled so geese are managed sustainably.

“We are responding to the concerns of local farmers and land managers and we are also committed to ensuring that management is controlled so geese are managed sustainably.”
Gail Churchill, SNH Orkney operations manager

“Last year 3,191 greylag geese were shot under the pilot project and the target this year is 5,500. In succeeding years this number will reduce as the population decreases. The work will be undertaken by experienced local shooters following established best practice methods, and overseen by staff within Scottish Agricultural College.”

Ms Churchill added: “This active management work will help us meet our nature conservation obligations by maintaining a sustainable and stable resident greylag goose population. It has the support of the British Association for Shooting and Conservation (BASC) who will be working closely with all of us involved in this new form of adaptive management control.”

SNH is also working with Royal Society for the Protection of Birds Scotland, Wildfowl and Wetlands Trust and the National Farmers Union Scotland to ensure goose conservation and sustainable agricultural land management.

Scotland’s environment minister Paul Wheelhouse said: “The increase to what has become an unsustainable population of resident geese causes serious damage to land and crops in Orkney. It is good that this successful conservation project, where local farmers play a major role in carefully managing goose numbers, is continuing. This sustainable solution was developed in response to the needs of the local community, and has widespread support in Orkney.”