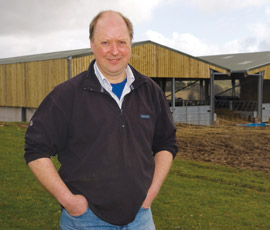 In the NFU Scotland’s cententary year, Gemma Mackenzie catches up with some of the management team

I farm in Gala Water in the Scottish Borders in partnership with two sons, having taken over from my father. It is a very typical, upland extensive Scottish stock farm with a mix of land types. The focus of production is suckler cows and breeding ewes. However, I started my working life as a vet in the north of Scotland so always have livestock at the centre. My sons are now developing timber processing, which is a new challenge.

I hope there are still some positives to come. The next two years, with both CAP reform and the independence referendum could change the face of Scotland. This year is the Union’s centenery and we have had some really special evenings to celebrate that landmark.

What’s your most precious farming memory?

The very ordinary things that make farming so special – sun burning mist off the grain in the morning; the tilth frothing up around a drill before it rattles back among the stones; bright-eyed calves taking their first steps and gangs of lambs galloping flat out round the hill just for the hell of it.

Where’s your favourite spot in the countryside?

Looking north from The Struie in Easter Ross over the Dornoch Firth into Sutherland.

My sister lives in New Zealand. I’ve never been to visit as I am scared that the combination of sunshine, grass and lifestyle would be too hard to resist. I am old enough to know that I am unlikely to change my ways now, so I shall be staying with the grey days and the mud of the Scottish Borders.

Paring sheeps’ feet – even with a turning crate – can be a long slog but after too many long meetings and endless coffees, even paring feet can seem like a pretty good way to spend time. I never appreciated the hands-on work quite enough – it is a good feeling at the end of the day to be tired but having achieved something real. 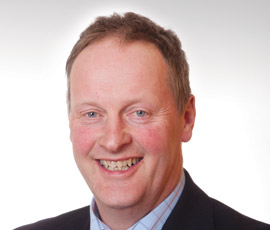 I was born on a family farm and went home to work after I left college. I then moved to be farm manager at Glenapp Estate near Girvan in Ayrshire, staying there for seven years. I got the opportunity to take on the tenancy of Firth farm near Melrose in 1998 and since then we have taken on a further 180 acres. I am married to Kath with two sons, Rory and Iain. Kath and Iain both work at home while Rory is an auctioneer at Acklington Mart in Northumberland. Kath also runs her own farm book business – so good to have a bookkeeper, a farmer and an auctioneer in the family. We run 1,100 Mule ewes, 80 Salers suckler cows and grow around 120 acres of grain. In 2003, Firth became Scotland’s first monitor farm and the lessons learned from the experience of opening up your farm business to others were invaluable.

Chairing two different branches on different sides of the country. It was also great to lead the Union’s livestock committee for four years. However, becoming a vice-president of the Union in its centenary year is a real honour. .

I have been lucky to do a bit of travelling and the Canterbury Plain in New Zealand would be my spot. You could farm whatever you wanted on such tremendous land.

Working with our Salers cattle and especially taking stock to the pedigree sales is a real joy. Least favourite – covering the silage pit. The first person that nails how to do this job as quickly and as cleanly as possible will do the industry a real service. 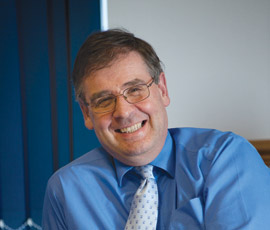 I was brought up on the family dairy farm at Kinross and on leaving school I went into partnership with my father and brother and we set about the task of building up a dairy and arable unit. In the late 1980s, I took on the arable side, which had grown to almost 1,000 acres by then. I farmed in partnership with my wife Mary up until 2010 when we chose to leave full-time farming. Since then, life has been far from dull. I am chairman of Scottish Agronomy, recently joined the main board of HGCA and I serve on the HGCA’s knowledge transfer committee. I have also been on the board of NFU Scotland for a decade and in my current role for five years.

If it was 30 years ago, I might have said New Zealand or around Vancouver in British Columbia – both offer the right climate and the chance to farm and grow any crop you want. However, here in Scotland when I was farming, the goal was always to get into East Lothian where the good farms are.

My favourite task was always driving the combine – it was that special time when a complete year’s work came to fruition and you had the deep satisfaction of seeing grain going into the tank. By contrast, clearing out the grain drier shed is definitely a rainy day job.