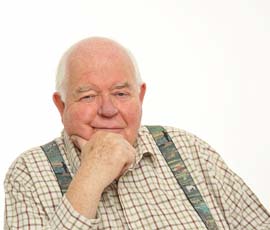 Our Single Farm Payment was electronically paid into our bank this morning. Thanks Jim – we needed it after the worst cereal harvest I can remember in this area.

Now we can celebrate Christmas upsides with some fellow UK farmers who can’t stop bragging about the yield records they’ve broken this year.

Indeed, I’ve heard some claim they’d rather do without the payment from Brussels. Well, if it causes embarrassment and they’d rather be rid of theirs, may I remind them that this is the season of goodwill, that it’s better to give than to receive, and my address and bank details can be obtained from Farmers Weekly.

I’m not serious, of course. I don’t really expect fellow farmers to hand over all their SFP to me – just part of it would do.

I would, however, point out that the kind of meteorological misfortune that’s affected some of us in the east of the country this year could happen to them someday. That’s the nature of the business we are in and one reason politicians see fit to provide aid. And a nice cheque like we’ve had, just before Christmas, helps to fill at least part of the gap left in the cashflow.

But agronomically (as distinct from economically), I’ve seldom felt better. The autumn corn is drilled, having all been planted into near perfect seed-beds. The earlier wheats and winter barleys look magnificent, if a little winter proud, and the later ones, put in in early December after sugar beet had been lifted, are still to emerge but went into September quality soil so should look just as well in a few weeks.

True, they’ve had less rain on them than would have been ideal – at the time of writing we’ve had only about 15in in this area through 2011 compared with a 24 inch annual average – but working the land has been a dream and every seed should grow.

Walking on it has been pretty good, too. I was out shooting on a neighbour’s farm the other day across land that usually sticks to rubber boots like glue making them weigh a tonne. I won’t claim we were kicking up dust, but last week my boots stayed clean all day.

If the law of averages holds true we’re in for a soggy January and February as the rainfall deficit begins to correct itself. Let’s hope it happens despite the inconvenience it might cause because we’ll need that water next year.

Meanwhile like everyone on the eastern side of the country I’ve enjoyed the autumn. And although it’s too early to be sure, crops already sown look set fair for good yields in 2012.

There are a few, more negative issues on the horizon, of course. Like what’s going to happen to the CAP following Camerson’s veto? Will the euro survive? Will those countries that adopted it be forced to revert to their previous currencies? And how on earth can that be done in any case?

There are a few more negative issues on the horizon, of course. Such as what’s going to happen to the euro. Will it survive? Will those countries that adopted it be forced to revert to their previous currencies? And how on earth can that be done in any case?

Closer to home is Britain sliding into the second instalment of a double dip recession? Will the Coalition government’s stringent budgetary measures enable us to climb out of the crisis and how long will it take? If the euro does collapse what will be the knock-on effect for sterling and the UK?

Questions, questions – the answers to which will bring hardship for many. But although it’s probably insensitive to say it, particularly at this time of year, farming will probably come out of it better than most industries. Happy Christmas.