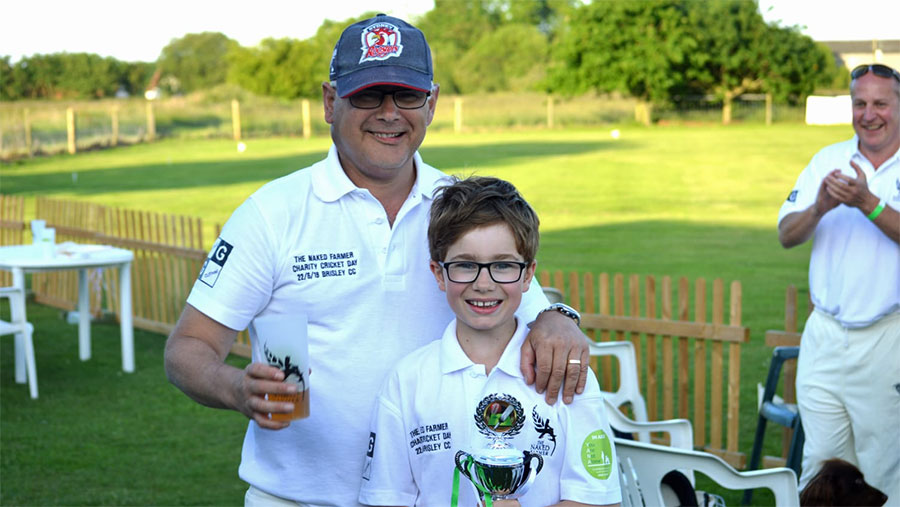 Patrick Joice and his son, Jack, who opened the batting

A Norfolk farmer with terminal cancer has raised more than £50,000 for a mental health charity after being diagnosed with severe depression.

Poultry producer Patrick Joice, of Uphouse Farm, South Raynham, organised a Naked Farmer charity cricket day to say thank you for the help he received from the You Are Not Alone (Yana) project – which provides confidential support for farmers.

Mr Joice was told he had cancer in March 2018. He was subsequently diagnosed with depression – a condition he says he had no understanding of and refused to believe he had – but was eventually persuaded to seek help by friends and family.

“A local doctor told me I had severe depression, but to be honest, I ignored it,” said Mr Joice. “I thought it was rubbish – and just kept going. I thought people with depression just needed a good kick up the backside – including me.”

‘It takes guts to talk’

The cricket day was named after the Australian Naked Farmer Facebook page, where Mr Joice first shared his story. It encourages farmers to post naked pictures of themselves and discuss their problems, because “it takes guts to take your gear off, just as it takes guts to talk about mental health”.

Mr Joice said he had been overwhelmed by the support from across the industry. A small charity, Yana operates on a budget of just £25,000, so the money raised is the equivalent of two years’ income for the Norfolk-based project.

Since organising the event, Mr Joice said he had been inundated with emails, letters, notes, phone calls and visits from other people wanting to talk about their own struggles, saying it had helped them be more open about their own situation.

Thanking everyone for their support, Mr Joice said he hoped it would become a regular annual charity event. He organised the day with his wife, Zanna, and friends Chris and Lucy McKay, and Billy and Sara Fordham.

Donations can still be made at the Naked Farmer Cricket Day Virgin Money Giving page.