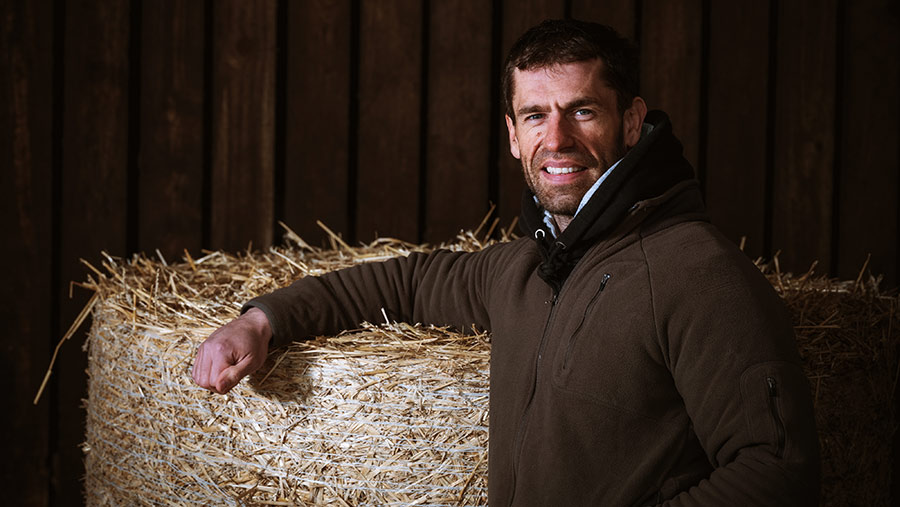 We drink plenty of cups of tea when we’re farming, but having lots of water is key, too,” says Kelvin Fletcher.

Staying hydrated is something the farmer and Strictly Come Dancing winner is very mindful of when he’s busy with his sheep flock.

It’s the same when it comes to maintaining a healthy diet. “You’ve got to take care of yourself and give your body the fuel it needs. If you don’t put the right fuel in the tractor, it’s not going to work – and we are the same.”

Paying attention to nutrition is just one of the ways the actor – who played on-screen farmer Andy Sugden in Emmerdale – stays healthy. He’s always tried to stay in good shape, physically, aware that this is closely linked to mental health.

“I’ve always been physically active. For me it’s an absolute necessity and, if you’re physically fit, there’s a good chance you’re going to be mentally fit as well.

When I’m active, when I’m feeling good, my decision-making is quicker. No matter how many plates I’m spinning, I’m able to mentally deal with it.”

Kelvin is certainly spinning a lot of plates at present.

At the point Farmlife meets him, he’s a year into his farming project (which has led to a popular BBC show, Kelvin’s Big Farming Adventure), has two young kids, his wife is expecting twins, he’s an ambassador for the Yellow Wellies charity, and he’s preparing to be a judge in this year’s Britain’s Fittest Farmer competition.

So it’s no surprise the 38-year-old doesn’t have the time to work out in the gym with the regularity he did in his late teens or 20s. “Going to the gym at 16 or 17 was the start of my journey with keeping physically fit,” he recalls.

Before that, he’d been pretty sporty as a kid, enjoying rugby, football, cricket, alongside his main passion for the performing arts.

“That was my real drive. But I was never discouraged by not being the best in my class at football or the fastest at sprinting or the best at rugby – I still enjoyed the challenge and the sense of togetherness. I just appreciated and enjoyed being active.”

So by the time he reached his late teens, when he had chosen his career, sport and fitness became all about enjoyment.

“I liked the social side – the gym was a place to hang out with your friends and that was a big a part of it. I did a lot of running back then, too, so mine was a mixed bag of training.”

He always reminds himself that taking physical exercise, however tough it feels at the time, often only involves a short effort at any one point. To build mental resilience and toughness is a bigger challenge.

“Ticking the box of the physical 30-second challenge or the three-minute effort or the hour in the gym pays absolute dividends for you mentally.

“The mental test can be minutes, hours, days, weeks, months – even years, so you’ve got to know you’re able and ready for that.”

It’s not always possible to devote as much time to fitness as you’d like, because sometimes other things in life understandably take precedence, he says.

“You’ve got to cut yourself a bit of slack – but try to make sure you are finding time for yourself. Looking after yourself has got to be a priority – treat it as a priority like you would looking after one of your animals.”

Being flexible and finding a fitness regime that suits your lifestyle as it changes is important, says Kelvin.

And nowadays he’s the first to admit his sometimes has to take a backseat after the family and the 48ha farm near Macclesfield.

Meanwhile, he’s loving his foray into agriculture (“slap bang in the middle of God’s country”). “It’s an unbelievable honour to farm, however challenging and testing it is – no other job can give you the same rewards.

“I’m still only a year in, but nothing I’ve done in the 30-odd years I’ve been in showbusiness has given me quite what farming has.”

How to enter Britain’s Fittest Farmer 2022

He acknowledges, though, the mental challenges it brings can be massive, highlighting the financial pressures brought by high fertiliser and feed prices as examples.

“I’m on a journey of discovery at the moment – so am probably overthinking certain aspects, but mentally it’s very challenging and very testing.

“I’m embracing these challenges, but I’m absolutely aware that there are farmers out there where the jeopardy is a bit higher – those who haven’t got the ability to go and earn elsewhere like I guess I have.

“If I wanted an easy life, I wouldn’t have chosen to do this,” he says. “I want to be challenged, I want to have to apply myself in a different way and I want my family to share in the rewards of hard work, dedication, sacrifice and commitment.

“Everything I do, I want to do to the absolute best of my ability, and this is something we as a family absolutely wanted to do. We want to give it our all.

“I can’t imagine my life being any other way. I’m a lot different now to how I was a year ago and every day I’m learning something.

“There’s one thing I have got – and sometimes this is the hardest thing – and that’s a work ethic. I know that’s going to pull me through most situations.

“That’s the first box you have to tick if you want to be a farmer – that willingness and ability to work hard.”

One of the aspects of Britain’s Fittest Farmer that appeals most to Kelvin is the varied nature of the challenges that contestants take part in. 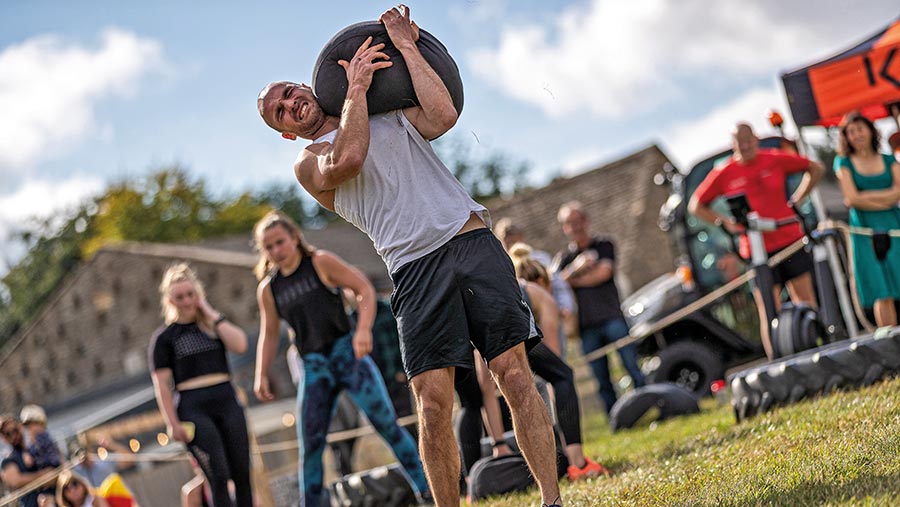 He likes the fact it isn’t all “gym, gym, gym” and doesn’t focus solely on dumb-bells and benches, because a lot of those in the farming community, like himself, aren’t necessarily able to get to a gym regularly.

“Throughout lockdown, I didn’t have any gym equipment, but from lifting car batteries to doing pull-ups on trees, I was still able to stay pretty fit and pretty strong.

“I first heard about the event before we got our farm and thought: Wow, that looks amazing. It’s a celebration of the sector and is promoting how much impact it can have mentally when somebody is physically well and active.

“To be involved in any way is a privilege. Who knows – maybe one day in the future I’ll compete myself! I’m certainly not at my physical fittest at present, but mentally, I‘m in a very good place,” he says.

He’s obviously still in good shape, though. Shortly before speaking to Farmers Weekly, he had to handle one of his Texels: “He’s very strong, well over 100kg, but I got the better of him!”

Our sponsors and partners