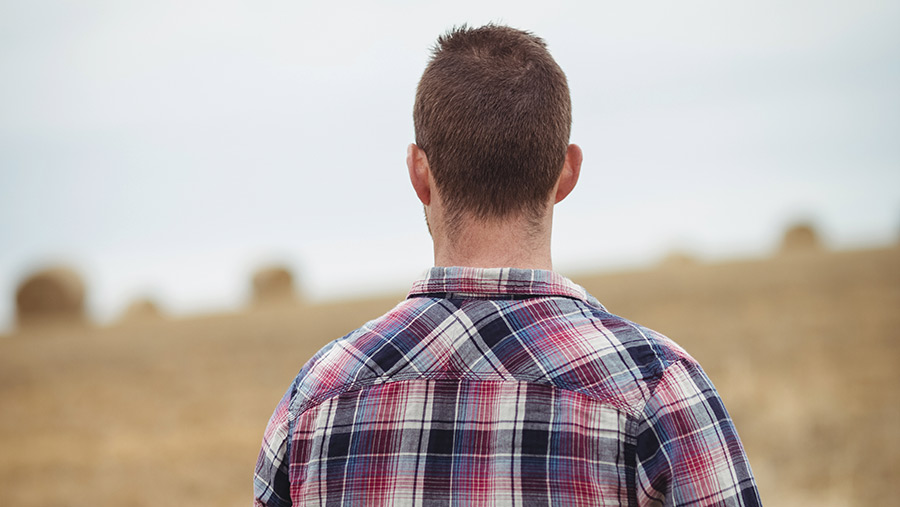 UK agriculture is undergoing huge and rapid changes – and while that means opportunities for some farmers, many others are finding the uncertainty and upheaval challenging.

Growers and livestock producers are increasingly expected to deliver much more than food – combating pollution, improving biodiversity and helping to mitigate the impact of climate change.

In Scotland they have doubled in a little over two years. Elsewhere in the UK, charities reported a 90% increase in call numbers last year and a further 50% rise in the first three months of 2022.

See also: 8 tips from Doug Avery on being a resilient farmer

Commodity markets are volatile, input costs are rising and farm incomes are being squeezed, adding to the pressure on farmers.

But wellbeing experts say support is available – and can improve mental resilience.

We are experiencing a level of uncertainty and transition in farming that we have never seen before, says Emma Haley of the You Are Not Alone (Yana) mental wellbeing charity for farmers.

She points out that society has been fractured by a succession of events – including Brexit, the pandemic, and now Ukraine.

The financial hit from the domestic cost-of-living crisis is being felt on farms as fertiliser, feed, fuel and other key input costs have rocketed.

Everywhere you look there is continuous change, and this has had a huge effect on mental health and resilience levels on farms, she explains.

But it is not always easy to tell when someone is suffering, so it is important to be aware of possible symptoms.

Spotting the signs of mental ill-health can be challenging because there may be no outward symptoms, says Alex Phillimore, of the Farming Community Network (FCN).

To confront this, people need to feel they can talk openly about any issues they may be experiencing in a guilt-free way, and have access to support networks and professional help where required.

But there can be telltale signs to watch out for in others or as a self-diagnosis.

Farm or horticultural workers often have to operate according to a set routine to get regular tasks completed.

A sign that people may be suffering mental ill health can be a sudden change in those work patterns.

It could be that they bury themselves in their work, disregarding all else. In contrast, a lack of engagement with work or reluctance to get involved to tackle a task can be symptomatic of ill health.

Stress and tension can lead to headaches and physical fatigue. Constant worry can also cause intense waves of fear, often referred to as panic or anxiety attacks.

These can have associated physical symptoms such as a fast-beating heart and breathlessness.

Disrupted sleep is a strong indicator of poor mental health. Whether it is difficulty in getting to sleep or waking up in the middle of the night and then turning over worries and troubles, this should be taken seriously.

When people are troubled, they can appear lost in their own thoughts, quieter than normal or distracted, or perhaps more serious and less likely to laugh and joke.

Others may be uncharacteristically short-tempered, irritable or frustrated.

Alternatively it could be that someone is taking less care of their personal appearance or the farm is less tidy or organised.

Endless pressure and tension take their toll on the brain’s ability to process information. Mental exhaustion can show up as forgetfulness or mistakes – both potentially dangerous on a farm.

Avoiding people and gatherings, or not facing up to making decisions, are typical symptoms of mental ill health.

Those finding life difficult will often withdraw from normal social circles, cutting out visits to Young Farmers’ Clubs, events or evenings at the pub.

It may show up in mail being left unopened or an unwillingness to discuss issues.

Mr Phillimore says the symptoms should not be ignored. Mental health should be looked on in the same way as physical health, where a change should automatically trigger a call to the doctor for a check-up.

As soon as you realise that you, or someone you know, has a problem, it is important to take steps to deal with the issue and start towards recovery.

As with a physical illness, ignoring it can prolong or worsen the problem.

It is important to recognise that mental ill-health – whether it is depression, anxiety, stress or some other manifestation – is extremely common and people are suffering, right now, the world over.

It is important to focus on getting well again. It is not a sign of weakness to face up to a problem – rather it is a strength to cut through the stigma.

Ms Haley adds that more and more people are realising they need to do that and are talking about their situations.

As with other illnesses, it is likely there will be a need for support. The first step may be to visit a GP, or it could be via the many charity helplines available round the clock.

It can help to pick up the phone or email a support organisation just to have a chat. Most organisations will provide a volunteer to talk regularly.

It could be as simple as talking about a looming decision or how the weather is causing problems, says Mr Phillimore.

Talking about what’s on our mind, especially if pressures are building up, can help us to offload and feel less overwhelmed.

The charities may be a faster route to fixing up expert counselling than the overstretched NHS.

Some can also provide financial or even practical farm support to alleviate issues that may be adding to the mental health situation.

Along with professional help, the individual can take steps to improve their mental ­resilience.

Different things will work for different people, but taking care of personal wellbeing can help sufferers feel more able to manage stress and other symptoms of mental ill health.

Here are some tips suggested by Mind, Yana, FCN and Rsabi:

Learn to be kinder to yourself

Self-criticism is often used by people to motivate themselves. But the language of self-criticism can be surprisingly self-destructive. Instead, it’s important to verbally reward achievements, even small ones, and give yourself a pat on the back.

Take breaks during the day

Even if it is just 10 minutes between tasks to do something other than farming. The work ethic in farming pushes everyone to work constantly. But ultimately productivity will improve if you are not physically and mentally exhausted – you will also make fewer mistakes.

Concentrating on something outside the work environment will allow you to refocus on other issues. If loneliness or isolation are factors, shared hobbies can be a good way to meet people.

Plan exercise away from the farm

Taking time to exercise outside of the farm’s confines, whether walking, running, cycling or swimming, will help broaden horizons. Scientifically, it has been shown that exercise releases endorphins (feelgood hormones) which can improve mood.

Switch off devices and phones during the evening; these are known to disrupt sleep if used immediately before lights out.

A useful tip is to write down all the things that are weighing on your mind before going to bed.

This will help you feel on top of the situation and, if you do wake in the night, you know there is no more you can achieve until the next day.

Talk to people you trust and let them know how you feel. Knowing there is a network of people willing to help can build mental resilience and alleviate stress.

Friends and family may also offer practical support or solutions. Discussing issues with people who have had similar feelings or experiences can help too.

Some people feel stressed because of the sheer number of different things that require attention in their lives. In this case, better organisation can help take back control.

Grouping the most important tasks around the times when you know you will have the most energy can help with improved concentration and efficiency.

List tasks in order of importance and tackle the most urgent thing first while perhaps creating a timetable.

Set smaller, achievable targets to make step-by-step progression and don’t attempt to do too much at once.

Having a conversation about mental health can feel uncomfortable, scary or awkward, according to Yana.

It has produced a seven-step approach to starting a potentially difficult conversation on mental health. It is based around the mnemonic H-O-W A-R-E U.

Chris McVey of Rsabi, formerly the Royal Scottish Agricultural Benevolent Institution, stresses the need to ask twice how someone is feeling.

“We all resort to saying ‘fine’ or ‘OK’ when asked. But this can be a knee-jerk response and deflect any real conversation on the true depth of feeling,” he says. 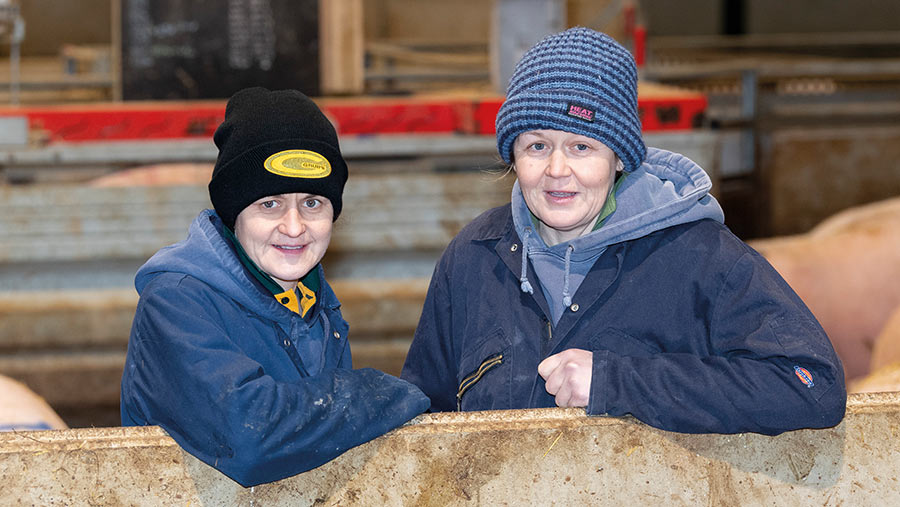 “We were going through a really tough time and we wanted to get some positivity into the industry,” says Kate, who farms with her sister at Pockthorpe, East Yorkshire.

“But the campaign is for the whole industry, not just the pig sector.”

The campaign includes specially made gilets sponsored by For Farmers, with the slogan “Back British Farmers” and #BiteIntoBritish on the back.

These are being sold for £30 each, with proceeds going to the Farming Community Network.

“Many pig producers have been making a loss for the past two years,” says Vicky. “Some are losing about £50 a pig. Despite increases, the pig price nowhere near covers production costs which have risen much faster.

“The gilets have been really popular. It’s a simple message. We’re asking consumers to buy British when they are shopping in supermarkets and support British farmers. Much imported produce isn’t produced to the same standard.”

There is a huge amount of support available to rural people, whether it is an opportunity to pick up the phone and talk with total confidentiality to another person, or get help with a financial or practical farming issue.

The message from all of the charities is the same – don’t struggle by yourself; the support is there, so please make use of it. Here are just some of the contacts and services available:

Provides people in all areas of agriculture with emotional, practical and financial support in times of need. Help ranges from in-person counselling and mental wellbeing training to grants for upskilling and help to live independently.

Supports people involved in Scottish agriculture emotionally, practically and financially. Support is available through the helpline, case officers and volunteers, as well as a call-out service for the lonely and vulnerable.

Rooted in East Anglia, Yana offers a confidential helpline and counselling for individuals and their families involved with agriculture and other countryside businesses in East Anglia and Worcestershire. Other services include training around mental health issues and raising awareness.

Calls are answered in person from 7am to 11pm every day of the year. Services offered range from help with animal welfare, finance and farm paperwork to support with mental health and relationship issues.

A website for people at risk of suicide and those supporting them.