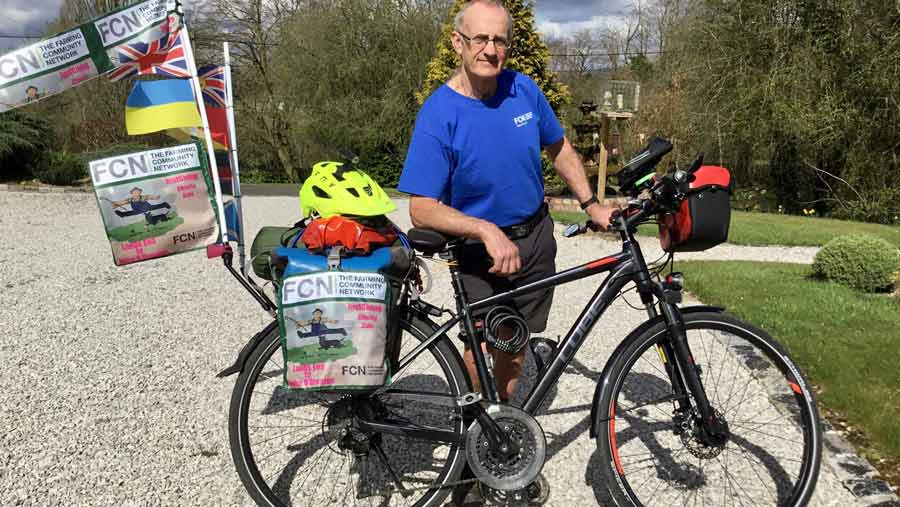 A retired farmer is shining a light on how support from farming charities can help older farmers who make their living on small farms, by cycling from Land’s End to John O’Groats to raise money for the Farming Community Network (FCN).

Will Appleby is 67 and describes himself as a “pensioner with knackered knees on a bike”, but this month he will embark on the three-week ride with 30kg of camping gear on board.

Mr Appleby said charities such as the FCN can offer a lifeline to farmers, particularly to the older generation on small farms.

“Unless the older farmer is supported and enabled to thrive, how on earth can we expect the youth of today to learn from their experience and take on this wonderful, yet highly challenging life?” he said.

The former military musician had farmed the family dairy and sheep farm in Derbyshire since leaving the army at 25 and admitted he had experienced “dark days”.

Mr Appleby took up cycling three years ago and has clocked up some impressive trips, including a 560-mile mountainous ride around the north coast of Scotland.

According to Alex Phillimore, head of communications and development at the FCN, Mr Appleby is proof that there is no age limit to setting ambitious goals.

“People like Will really show the strength of community in farming and, by giving something back, he hopes to help to support other farmers through their own challenges. We thank everyone who supports FCN and wish Will luck on his journey,” said Mr Phillimore

You can donate to the fundraiser on the JustGiving website.

Over 40 and fancy a challenge?

Now in its fourth year, Britain’s Fittest Farmer is a fun competition organised by Farmers Weekly to get farmers thinking and talking about their physical and mental health.

This year there is and additional category for the over 40s. There are three categories in total: men under 40; women under 40; and mixed over 40s.

There is a round of qualifiers and the finals take part at Tom Kemp’s Farm Fitness gym in Essex on 17 September 2022.

We’re looking to crown three individuals who prove themselves to be admirable ambassadors of health and wellbeing in farming.

Each winner will receive a coveted trophy and a £1,000 cash prize.

Scottish farmers and crofters are being urged to take part in a survey designed to inform a new programme to support their wellbeing, which closes at the end of May.

The survey wants to learn “how farmers and crofters are feeling, what type of activities and resources would best support them, and how they should be delivered”, according to Ross-shire farmer John Scott, who chairs a steering group of industry partners.

That group was established after a series of talks in 2018 by New Zealand farmer Doug Avery about his own challenges with mental health and wellbeing.

“When Doug visited Scotland, we were astounded by the response, highlighting the appetite from farmers and crofters to better understand how we can manage our own wellbeing through shared learning, events and resources,” said Mr Scott.

The survey is supported by Scotland’s Rural College, the National Mental Health Forum, The Royal Highland and Agricultural Society of Scotland and the Scottish Rural Network.