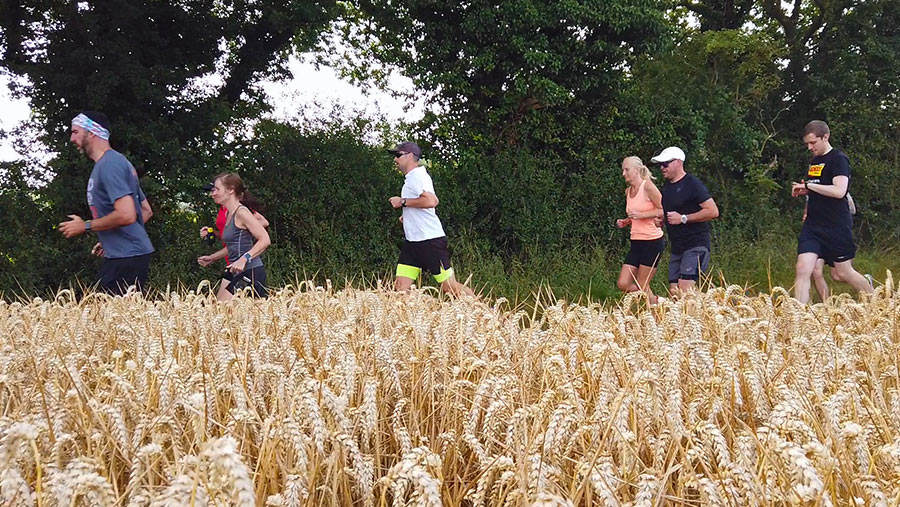 An Essex farmer is spearheading a community project that takes the noble effort of a Sunday morning run and turns it into a valuable public outreach opportunity.

Ben Eagle leapt at the idea of hosting an informal 5km run around his farm on the Essex coast, about six miles north of Clacton-on-Sea.

Joining forces with fitness and wellbeing company Thrive Outdoor, run by instructors Andy Bareham and Stephen Mayzes, Ben has been hosting groups of self-motivated joggers at Devereux Farm in Kirby-le-Soken since June.

He says welcoming people on to his family’s mixed farm for a fun run is a chance to forge bonds in the community, while also achieving greater public engagement for the work that farmers do to produce world-class food and care for the environment.

“This is all about getting people from the local community on to the farm, mental and physical fitness and getting farmers all over the country involved,” explains Ben.

He says hosting weekly fun runs around the 300ha farm, which neighbours the Hamford Water nature reserve, is a great way of meeting more people in his area, sharing important messages about farming, food and the environment with them and also motivating himself to boost his fitness levels.

“I think that Farm Runner has huge potential from an engagement point of view because it’s really simple.

“Critically, this is a great way of getting people on to your farm and talking about food and farming.

“I’ve had some great conversations about the basics, such as what different crops are used for, keeping dogs on leads and all the countryside code stuff.

“I’ve met so many people in the village who I’ve never met before, which is really nice as well.”

He says running can be a good way for him to relieve stress after a busy day while also getting around the farm to make sure everything is as it should be.

“It’s a really stressful time in agriculture at the moment.

“We’re having to run lots of extra businesses, which adds to the stress, but I find running really helps.”

Whether you’re hosting your own fun run or just out for a Sunday morning jog with the dogs, all you need to do to join the Farm Runner community is to film a short video of yourself running on the farm and share it on Twitter or Instagram with the hashtag #FarmRunner.

“The whole idea behind this is that we motivate each other and get a community going.

“I’m really pleased with how it’s grown – it’s been completely by word of mouth and social media and we’ve got a growing number of farmers getting involved.

“It would be great to have more farmers getting involved and it’s really simple and easy, which helps if you do need a bit of a kick up the backside to get out and improve your fitness like me.”