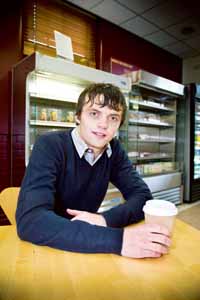 The other day I made myself a flask of coffee. Nothing out of the ordinary with that you might say, but as it later turned out, I hadn’t boiled the kettle first.

Now I’m not sure whether this minor oversight is a symptom of overtiredness, but either way it is a very bad sign. It is quite common in my household to get up in the morning to find my dad has left the Weetabix in the fridge and the milk in the cupboard, and – like father like son – I’m worried that the kettle incident is just the start of things to come.

I’m also slightly ashamed to admit that, despite the contents resembling granulated sludge, I still drank the lot. Feel free to judge me, but remember that I’m a student and any sort of legal substance capable of powering you through reams of economics notes at 2am is a highly valuable commodity. For this reason, I’m afraid to say that the past few weeks haven’t really been particularly interesting. Lectures now seem a distant memory as we’ve all been clocking up way too many unsociable hours in the library. As I write, there’s still one exam left and a large assignment to finish, so nothing is going to change in the immediate future.

What has changed though is the contents of our kitchen. I mentioned a few months ago how my flatmates and I seem to be breaking appliances at an alarming rate, and the trend seems to have been continuing recently. We are now on our second kettle, third toaster and second microwave of the year, and our second hob has recently been condemned as an electrical safety hazard. Though I concede that our cooking skills leave a lot to be desired, I’d like to think that the problem lies with our landlords who seem unprepared to spend more than £3.99 on anything other than mint imperials for their enquiry desk.

Out in the field, the crop management plots are developing nicely. I mentioned last time that ours looked a little sickly, but a few millimetres of rain has improved the situation enormously. The question now is when to sell the remainder of the crop and, given the current market, we think getting that right is going to be the difference between winning and losing.

Reports from home include news of a welcome day of drizzle. We drilled our sugar beet and cress the best part of three months ago and in places there hadn’t even been the moisture to get them to germinate. As the saying goes though, it’s better late than never.

Back on campus, I’ve been fortunate enough to have been voted chairman of our Students’ Union. Part of my responsibility involves organising the logistics of Freshers’ Week, so if you’re coming here in September I’ll be the one accountable for all the confusion. As is the SU tradition though, candidate question time concluded with a range of strange tasks. Mine involved a stage, a microphone and a large stepladder – I’ll let your imagination do the rest.

In the world of final-year research projects, I spent a couple of days last week sampling and analysing 60 plots of Cordiale for levels of eyespot. Each plot will have had a different treatment combination at T1 and T2 and, hopefully, I’ll get some meaningful results later in the season. Preliminary findings from last year allude to something very interesting.

As the end of the academic year approaches, it’s time to think about how I’m going to ship the contents of my room home again for a summer spent pea vining and combining. I’m not entirely sure that my little car is going to cope with a whole year’s worth of accumulated rubbish. More important is the forthcoming Cereals event. A few of us from Nottingham will be helping to man our university’s stand, so pop along if you fancy knowing more about what we do here at Sutton Bonington.