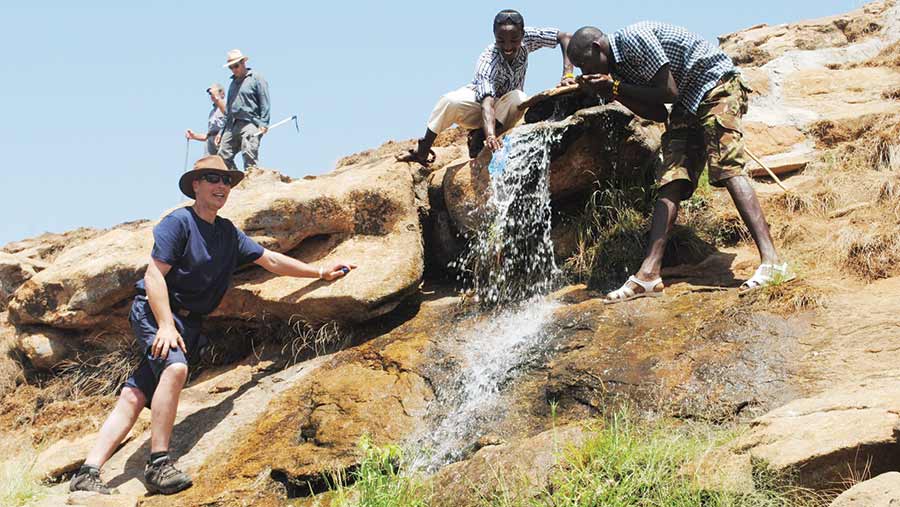 One split-second decision made on a dairy farm in Devon during a particularly wet August day in 2012 has changed the lives of 1,600 people in North Central Kenya.

When Richard Gibson from Nether Woodburn Farm, near Tiverton, opened the letter beginning “Dear farmer” inviting him to take part in a BBC TV series, he nearly tossed it in the bin.

But after another wet day on the farm and some encouragement from his wife, Heather, he re-read it and completed the online application.

Several forms, psychiatric and screen tests later, and while sat on the scraper tractor, Richard received a phone call confirming that he had been chosen to take part in a programme called The toughest place to be a farmer.

Apart from the clues he could gather from the packing list and the injections required, Richard had no idea where he was going and what he would be doing.

“I had to have a yellow fever injection, so I knew it was South America or Africa, but Africa’s a big place,” he says.

Richard spent 15 days living with the Samburu people in a village called Mpagas. The villagers built him a hut and, though they don’t have beds themselves, made him a bed to protect him from the scorpions and snakes on the floor.

He was accompanied by a producer, an assistant producer and a cameraman. However, he spent a lot of time with just his host, fellow farmer Lemeragichen, and with the villagers, who are related to the better-known Maasai tribe.

During the fortnight spent in Kenya, Richard fully immersed himself in their way of life, although he did decline the offer of the circumcision ritual required to make you a “warrior”.

One of the tasks he had to complete was fetching the water with his host’s wife.

They had to walk 40 minutes in blistering heat to fill up four five-litre cans with water from a 10 foot well and carry them home again.

“The thing I got out of it was that they might die in a month’s time, but we have a lot to be jealous of,” Richard says.

“They were really warm and genuinely kind to me, and they didn’t have to be.”

See also: Farmers reveal what it’s like to be featured on TV

The Samburu people used to be nomadic, but have created more permanent settlements over the years.

They are pastoralists, farming cattle and goats for their own consumption and to sell.

The animals spend most of the day roaming – grazing often “dead grass and leaves”, as Richard recalls – but must be bought into an enclosure at night because of the threat of predators.

Calves and kids are kept inside a hut most of the day and are released to feed from their mothers at set times.

When the youngstock is feeding, the farmers will milk the other teat.

They would be getting about a pint a cow a day – very different yields from those Richard gets from his 120 cows at home.

They sometimes kill and eat a goat, but eat little meat really, existing mainly on maize meal, milk and blood.

“I couldn’t survive on what they ate, it’s nothing. I lost about a stone in two weeks,” Richard says.

On his trip, Richard went to one of the local towns to meet a herdsman who had lost all his cattle because of drought and had to leave the land to find jobs such as cracking stones to make concrete for the road.

“I just rush around like a slave doing any jobs I can to get money for my family,” the tribesman told Richard. “I used to be a proud man, but I am nothing here.”

Farming in Devon has its challenges. But finding water is not one of them Richard Gibson

It was clear when the programme was screened that this story moved father of two Richard.

And it was one of the moments that led to the charity Aid for Samburu being born.

“Farming in Devon has its challenges,” says Richard. “But finding water is not one of them.

“It was clear they had a huge, huge water problem,” Richard adds.

And he decided upon returning home that he would set about raising money to change that. 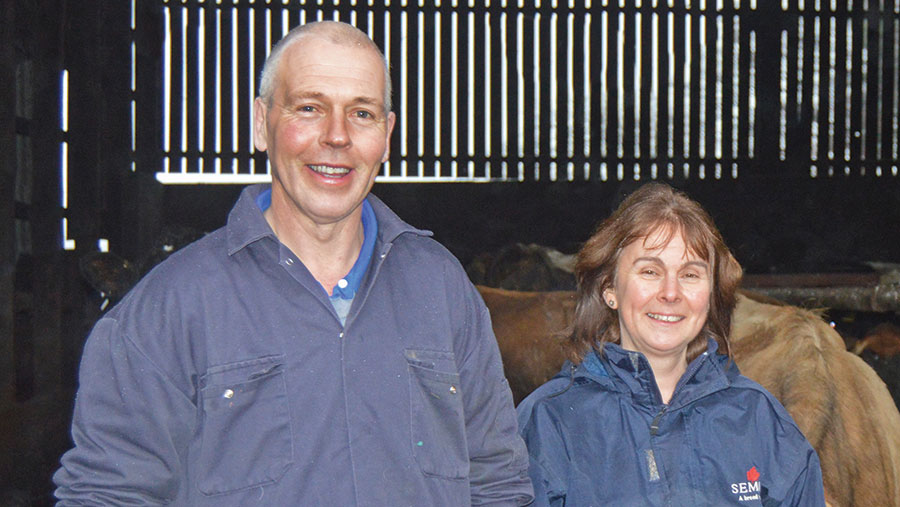 Reunited with Heather on British soil, Richard got the ball rolling on his mission.

The couple started ringing around charities to ask if they would be able to drill a borehole if they raised the money for it.

“It’s far too remote” was a common response and so the Gibsons decided they would have to get going on their own.

The TV programme Richard featured in was due to air in March 2013.

The couple knew that might be their best bit of publicity, because Richard told the camera he planned to go home and fundraise.

With that deadline looming, Heather began tackling the world of memorandums, constitutions, trustees and gift aid tax codes in order to set up an official charity and JustGiving page and was successful in doing so just a week before the show aired on BBC Two.

“We’re just farmers and we didn’t know anything about all this,” says Heather.

“One thing I have learnt is that if you don’t know what you’re doing, just hold your hands up and seek as much advice as you can,” she adds.

Aid For Samburu was founded with a committee of locals and friends, with the key aim to help fellow farmers in a less favourable part of the world.

The charity has raised money both through donations and pledges, as well as a lot of fundraising.

“It’s a good job I like cooking,” says Heather.

“We have also been lucky to receive some big backing from an investment company who saw the BBC programme.

“It’s incredible how generous people are.”

“One of the things people like about us is that we have no overheads, no running costs – apart from a website – so 98p of every pound goes to the Samburu people.”

Once the fundraising got going, step one was to sort out a plan of action for getting a water source to Richard’s host community.

After lots of research and deliberation on the best way to provide water, Heather and Richard found The Milgis Trust, a charity in northern Kenya, who would help with a borehole project.

The Milgis Trust is a conservation charity run by a Kenyan lady called Helen Douglas-Dufresne, who had implemented successful water projects previously, understood the Kenyan way of working and the Samburu people and was keen on the project because it would also hold huge benefits for wildlife as well as the people and livestock.

Installing a water system held more complications than Richard and Heather could ever have imagined – from the access issues to the elephants who might destroy it in search of their own water.

Finding the right spot to drill was another huge task.

To do so, they employed a hydrogeologist who identified an area where he believed there was an ancient underwater river.

And although they knew the spot, they didn’t know if the water would be drinkable or full of salt. And then they had to get a drilling rig there.

In November 2015, the borehole was drilled.

Sure enough, they hit an underground river – and the water was beautiful. 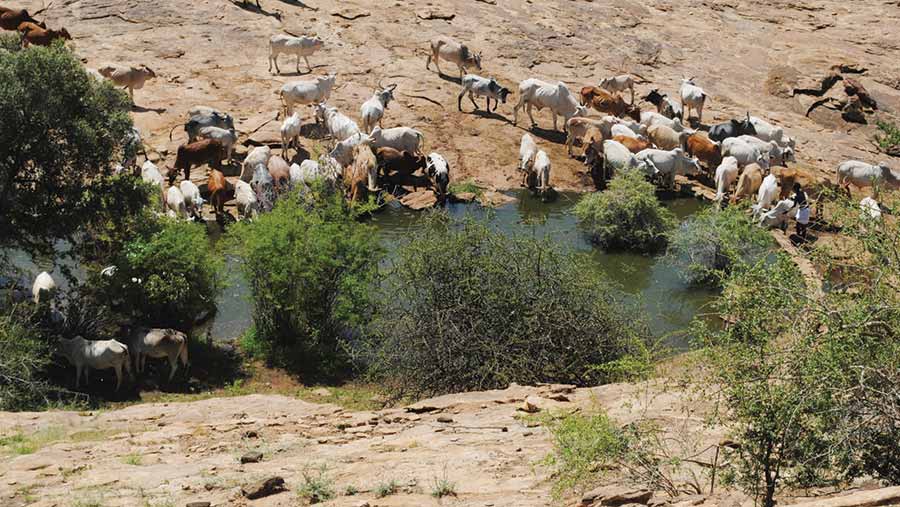 A wall was built to trap water that overflowed from the water tanks. This has become a watering hole for animals © Heather Gibson

Needless to say, the villagers are incredibly grateful as it has changed their lives completely – as well as those of the livestock and local wildlife.

“We are told they are suffering a nasty drought at the moment, but our community has at least got water,” Heather says.

The borehole and solar panels are within a security compound that is always manned by two water custodians.

The panels themselves need cleaning twice a day because, being on the equator, they must lie horizontally and so get very dusty.

The system is also manned by scouts in the area and there is a mobile mechanic on hand for any issues.

One problem that had to be fixed was a water tank that had been trashed by baboons in search of a drink.

This covers all the planning and preparation work, transport and implementation as well as maintaining the system and looking after its security for five years.

The villages have formed a committee who will hopefully take it over after this time. 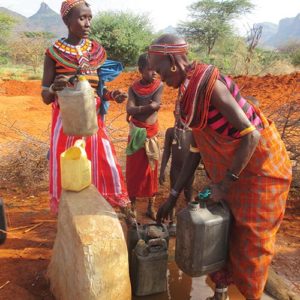 Aid For Samburu still has £9,000 to raise to cover the trenching fees for the water pipes and maintenance – the devaluing of the pound has, of course, hindered them paying off the project costs.

“We thought we might draw a line under it once the water project was complete,” says Heather.

In fact, they are now already working on new projects that the villagers asked for help with.

One of these initiatives is a veterinary programme, firstly focusing on the rabies problem in their dogs.

“Dogs are in this strange void because the people need them to protect the village and their livestock – from hyenas, for example – but the people don’t want to be too close to the dogs in case they have rabies,” Richard explains.

The plan is to look at a vaccination and identification programme, possibly involving microchipping.

“We’re coming at it from a farming point of view because that’s what we know,” adds Heather.

“I want to help them look at the quality of their cattle as well as the quantity,” says Richard, who has seen how the water availability had increased milk yields by June 2016.

Another of the issues the men and women of the village have raised is birth control, so Aid for Samburu and the Milgis Trust have begun work on helping the community with family planning.

Richard says: “You have to do what they want, not just what you think is best.”

Ways you can support Aid For Samburu

If you want to help in supporting fellow farmers on the other side of the world, there are several things you can do:

1. Hold a fundraising event for the charity. If you or your young farmers club are keen to raise money for the Samburu people, you can email Heather for any advice at heather.gibson329@btinternet.com.

3. Aid for Samburu works with EasyFundraising, so that if you do your shopping through their site, they can receive extra donations without it costing you a penny. More details are on the Aid For Samburu website.