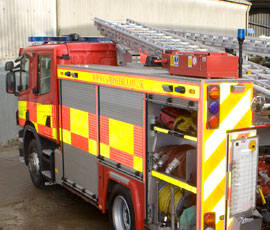 Firefighters are investigating the cause of a huge blaze at a chicken farm that tore through two hen houses.

More than 50 firefighters were called to tackle the fire, which created a large plume of smoke that could be seen from several miles away.

At its height, 10 crews battled the blaze which started in farm buildings in Frittenden, near Staplehurst in Kent.

Residents living nearby were advised to stay indoors and keep their windows and doors shut because of the large amount of smoke.

A spokesman for Kent Fire and Rescue Service said no one was injured in the blaze, which started shortly before lunchtime on Wednesday (11 January).

David Friday, of Fridays Limited, said the business had been in the family for 50 years and everyone was shocked.

“A fire broke out at our Knoxbridge site near Cranbrook, Kent,” he told the BBC News website.

“Two hen houses were affected during the fire, one empty and one stocked. The Kent Fire and Rescue Services successfully controlled the fire around midday. All staff are accounted for and no injuries have been reported.

“An investigation will now take place into the damage caused and the source of the fire.”