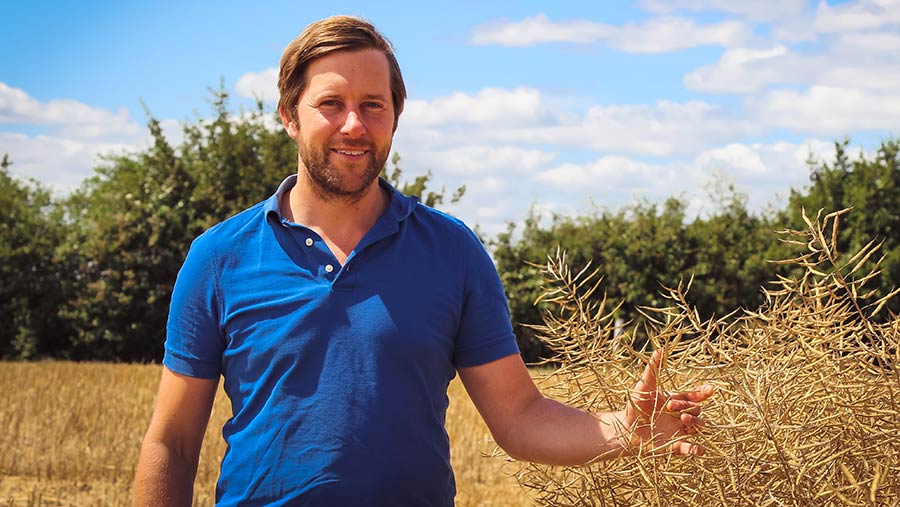 It’s early Monday morning in Hampshire and overnight a cold rain has lashed the ewes lambing outdoors on Tom Martin’s farm in Cambridgeshire.

One yearling ewe didn’t have the sense to give birth under the hedge, and dropped a large, dopey single lamb out in the middle of the field where he was blasted by full force of the elements before being found on Tom’s morning round, cold, but alive.

As he cradled the lamb under his jacket, topping it up with some colostrum, a casual observer would have found nothing remarkable about the scene had it been 2017 or 40 years previous.

See also: Top tips for a career in agricultural engineering

That is until he whipped out his smartphone and beamed himself and the lamb live into Harbour Primary & Nursery School in Newhaven, East Sussex, as part of his fortnightly update for a class of 11-year-olds on what’s happening on the farm.

The project, dubbed “FaceTime a Farmer”, is Tom’s idea of building on the success of big annual outreach programmes such as Open Farm Sunday, by getting the story of farming into classrooms on a regular basis.

He uses FaceTime, the free Apple video-calling service, on his iPhone but other similar services such as Skype could just as easily be used and now he’s on the hunt for more farmers to join him.

Probably the hardest part will be finding sufficient farmers with a good enough mobile phone signal to be able to broadcast live from the field, although this is gradually improving.

“The background to this is I feel the biggest issue in farming over the past few decades is the divorce of farm and consumer, and I’m passionate about rectifying that,” says Tom.

After initially posting a prototype video on Facebook, he received dozens of enquires from schoolteachers who have been looking to increase children’s understanding of the countryside, which opened his eyes to the scale of the demand for this type of education.

Harbour Primary & Nursery School is typical of the type of urban state school Tom believes farmers can assist with in helping bridge the urban-rural divide and educating children from an early age in where their food comes from.

He’s teamed up with teacher Olivia Mellor, to make his updates chime with whatever the pupils are learning that week.

This means presentations walk children through from what’s happening on the farm to how that’s relevant to what they’re learning in the classroom, such as beginning with talking about sowing wheat and taking it through to basic plant genetics.

I’m down on the south coast this afternoon; here’s why. #FacetimeaFarmer
Get involved: https://t.co/rwIeIIqEFA pic.twitter.com/YNTQcIqNee

“Kids not only look forward to it, they’re working towards it as well,” explains Tom, who says he has been overwhelmed with interest from other educators to bring the project to their schools as well.

That’s why he is now on the hunt for other farmers who may be interested in taking part, to take it from a one-man-band to a nationwide programme.

And although the prospect of addressing a room full of children may sound daunting to many, Tom says it couldn’t be further from the truth.

He explains all that’s really required is a smartphone, a headset, and the ability to explain what’s happening on the farm once a fortnight for 20 minutes during the spring and summer terms and a bit of forward planning with the teacher.

That’s why he’s teamed up with recently merged charities Linking Environment and Farming and Farming and Countryside Education, who have agreed to shoulder some of the workload linking farmers with interested schools [PDF].

They have agreed to take on the work of publicising the scheme to schools, matchmaking, and doing all the background work before farmers start participating.

And for farmers who are interested but have questions about the feasibility, their first task was to sit down with Tom and plough through the questions around workload and technology.