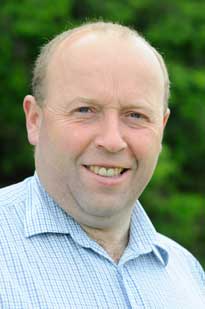 After saying in my last article we had escaped the worst of the weather, we then had 24 hours of heavy rain and some areas had 15in of snow.

With little drying we had to stop ploughing, which has resulted in even more work being pushed into the narrow springtime window.

With calving and lambing under way and a 1000 acres of spring cereals to drill, grass to fertilise and roll, as well as winter cereals to spray and top dress, I don’t think any of us will be idle for the next few weeks.

Only three days after the new pig fattening building was completed the first pigs were in and within a week it was full. To date the building is working well and pigs appear to be growing as you watch them – long may this continue.

Due to planning regulations I had to install a 45,000-litre firefighting water tank despite the fact there was a fire hydrant on site. I thought it would be a good idea to fill this tank from rain water coming from the new roof with the overflow from the tank going down the field drains.

The tank was placed two-thirds underground and left in place until we fitted up the pipe work. Unfortunately, the heavy rain came before the pipes were connected. While driving down the main road and looking over to the piggery I could not believe the tank was completely out of the ground bobbing like a cork. It has been dug back into the ground again, but this time it has been weighed down with water.

I recently took advantage of volatility in the grain market and locked in feed barley for November delivery at £132, whether this is a bargain or not it will remain to be seen, a lot can happen between now and harvest.