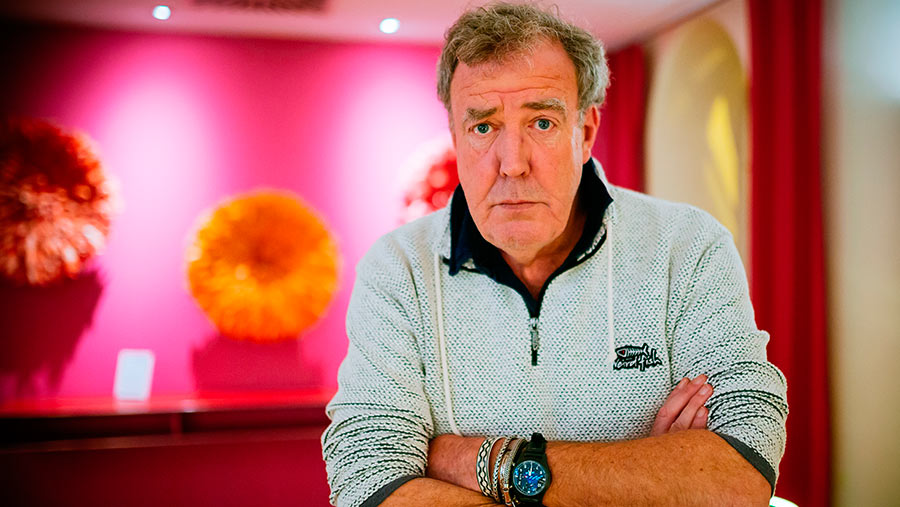 One of the biggest names in broadcasting, Jeremy Clarkson, has shocked the world by declaring himself a farmer – speaking out about how red tape is thwarting his efforts to farm without subsidies.

In an interview with The Sunday Times on 3 February, the presenter of Amazon’s hit motoring show The Grand Tour donned his tweed coat and flat cap and climbed aboard a classic Massey Ferguson 165 to proclaim that he’s serious about agriculture.

Farming might not seem the natural habitat of @JeremyClarkson, but the former Top Gear presenter is ploughing a new furrow as a conservationist https://t.co/dujA1RpoD0

The 58-year-old is farming about 400ha of arable land in the Cotswolds, growing wheat, barley and oilseed rape.

He’s been busy taking land out of stewardship schemes to grow crops but says he’s been bogged down by the sort of bureaucracy that farmers will be all too familiar with.

He said: “The idea seems to be that I’m unable to be a steward of this land but some civil servants are able to.

“I take the global view that there’s a lot of starving people, and the bigger the world’s population gets, the more food we’re going to need. So it’s slightly mad to not farm things because there’s a rare grass growing.”

He’s also come up against stocking rate problems when he tried to graze some sheep on his farmland and couldn’t believe the government has a satellite for “spying” on farmers.

Having bought the farm about 10 years ago, he decided to rename it “Diddly Squat” after scanning the books and concluding that it was “financially barren”.

He confessed that he currently contracts a farming neighbour to drill, spray and harvest his crops but has ambitions to do all this himself in the future.

Farmer Clarkson admitted that life on the farm had been a sharp learning curve. One harvest he rendered his grain totally worthless after storing it on an old airfield runway on the farm, unwittingly mixing it with gravel.

Realising that he needed a grain shed to store his harvested crop properly, he was staggered to learn that building one would cost an eye-watering £250,000.

“How many years do you have to farm just to pay off the barn?” he asked The Sunday Times writer Nick Rufford.

“I don’t see how farming pays at all. How big does a farm have to be if you can’t make money on a thousand acres?”

Read the full interview with Jeremy Clarkson on The Sunday Times website.