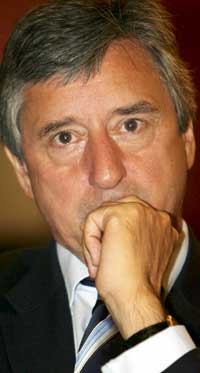 Farming minister Jim Fitzpatrick has come under fire after he walked out of a Muslim wedding of a constituent because he and his wife would have to sit in separate rooms.

Mr Fitzpatrick said gender segregation was a sign of increasing radicalisation and was damaging to social cohesion.

However Muslim leaders have expressed surprise that Mr Fitzpatrick, a third of whose east London constituency is Muslim, was not aware of the traditional custom.

Sir Iqbal Sacranie, a founding member of the Muslim Council of Britain, said Mr Fitzpatrick’s reaction showed a lack of interest in engaging with people of different backgrounds.

“Sadly, it reflects badly on him,” he told Daily Telegraph.

“If he had a little bit of knowledge he would have found it was quite normal and nothing unusual for them to enjoy the celebration in this way.

“There are some who prefer segregated events and some where they are joined together. We live in a society where we need to respect all traditions.”

Mr Fitzpatrick has represented Poplar and Canning Town since 1997 and became a junior DEFRA minister in June.

He told The Daily Telegraph: “My wife and I go to weddings to celebrate the occasion jointly. If we are welcome as a couple we go as a couple and if not it is our right to say we don’t want to do that.

“I’m not pandering to any minority opinion.”