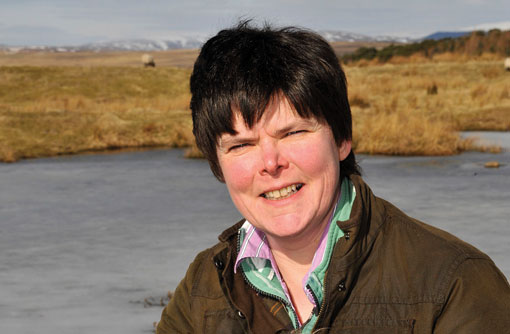 What a difference a mild winter makes. For the first January in three years, work on our farm has gone relatively smoothly.

Jake has not had to spend extra time on defrosting troughs, trying to get the tractor started or just generally moving from A to B. Furthermore, we have saved a lot on both feed and bedding.

Things have been more stressful in the office. The end of January is tax return deadline time for self-employed types such as us. Of course it is perfectly possible, sensible and advisable to deal with this months in advance, but we always seem to put it off until the last-minute.

It’s a bit like when you know you are going to have to get more petrol on the motorway and the sign says there are services in one mile or 12 miles – we always seem to chance it and hang on to refuel in 12 miles. So after months of making excuses, I finally knuckled down, completed the accounts and submitted the returns. Furthermore, after last year’s hard drive implosion incident I also backed everything up twice. Item one on 2012 to-do list has been ticked.

The year kicked off with Archie on an under 12s rugby tour to Belfast. This was his first trip away from his parents and also his first trip overseas if you don’t count that outing to Holy Island. It seems to have gone well with no arrests, one brief visit to A&E and only one sending off. We were somewhat surprised when Archie reported that they got thumped by the Methodists. However, it turns out that this was a school.

He did acquire one very useful skill on tour – the ability to make a cup of tea, perfected through experimentation with the “welcome tray” in his hotel room. It’s probably just as well that there was no mini-bar.

I was especially touched that Archie bought us presents, all of which were selected from the fine range of gifts available on the ferry home. Mine was a Loch Ness Monster thermometer fridge magnet. We also received a chipped tartan mug, although Archie did explain that it wasn’t chipped when he bought it. Of course, it is the thought that counts.

Jake is keen to encourage both his children in their sporting endeavours and last week he went to support Julia at a club netball match. The fact that this was only the second netball match he had ever seen did not prevent him from sharing hints and tips on technique and team selection from the sidelines. Julia was not entirely grateful. Mortified would be a more accurate description. In future, I think he will be sticking with mini-rugby at Alnwick where he is surrounded by like-minded people.

Since the New Year there has suddenly been a lot of talk about a referendum on independence for Scotland, which I’ll admit I find rather unsettling. We only live a few miles from the border and we have multiple connections with Scotland:

• many of our friends and Jake’s relations live there;

• we trade in livestock and buy services there;

• my cousin played rugby for Scotland (before they became really strict on the qualification criteria, obviously); and

• even as I write, Jake is negotiating the Galashiels one-way system to take Julia to the orthodontists.

Indeed, if you examine the family tree of most Northumbrians, I don’t think you would have to go very far before you come across somebody Scottish. So, instinctively, I rather hope the Scots don’t vote to leave the UK.

I think this must have been playing on my subconscious as I found myself selecting a birthday card for one of our Scottish relations. I was immediately drawn to one featuring a large, but artistic, Union flag. Then it occurred to me that this might be seen as provocative. It might also be counter-productive since one of the main reasons for supporting independence appears to be that it would annoy the English. In the end I opted for a card with a non-controversial pastoral scene, but I’m not sure I can maintain such tact for another two and a half years. I’m bound to crack and end up sending something that just says VOTE NO on the front.

On a sad note, last week I attended the funeral of the last of my great aunts, someone who had a very long and happy life, returning to Alnwick to be buried after more than 60 years living in London. It was a sombre occasion but it was also interesting to observe some behavioural differences between the London family and the Northern relations. The main one was the copious cheek-kissing, which they go in for and we don’t. Our contingent agreed this is because we are basically shy, Northern, Presbyterians (that Scottish link again) and what’s wrong with a firm handshake anyway?

As a fellow mourner memorably observed, “If a Northumbrian wants to kiss you, they kiss you straight on the lips”. True.

Read more from Elizabeth Elder on our dedicated page.