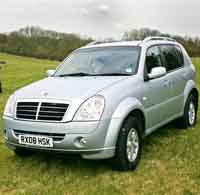 While much of their time is spent worrying about what their northern neighbours are up to, the South Koreans still seem to find time to devote to their burgeoning engineering industry.

And among the fridges, flat-screen TVs and heavy plant you’ll find a new era of Korean cars that no longer look like they’ve been thrown together in a shack on the outskirts of Seoul.

Among these are an evolving breed of four-wheel drives. Conscious that many of its vehicles will find their way into working roles, SsangYong now has two commercial 4x4s.

In size and stature there is little to split the Kyron and Rexton, but when it comes to performance it’s a different story altogether.

Both borne out of a joint venture with Mercedes, the two cars’ engines vary wildly in character. The Kyron’s four-pot trundles along happily and is perfectly capable of everyday pavement-hopping, but ask a little more of it and you find yourself having to use large dosings of right boot with the inevitable thirst effect.

Conversely, the larger, torquier, more powerful five cylinders of the Rexton feels relaxed with pretty much everything you throw at it. Loaded trailers or burn-outs at the lights won’t faze it and you rarely find yourself fishing for a lower gear thanks to the motor’s low-end grunt. Add to that its pleasant burbling at idle and gravelly grumble at speed and the bigger car certainly has the edge.

Styling-wise, neither are pretty, although the Rexton probably has the edge with more than a nod to its Germanic connections. Stick a three-pronged star on the nose and you’d be forgiven for thinking that this was a squashed-looking product of Herr Benz.

Which to choose? If it’s a working vehicle you’re after, then it’s not a difficult choice. The Kyron squeezes an extra 6mpg out of its 2-litre four-pot and has the benefits of a low-range box. But the Rexton’s bigger, more thirsty motor means it will rarely struggle with load-lugging and, crucially, it will tow 3.2t. Just £2000 more expensive, it’s the option to plump for.