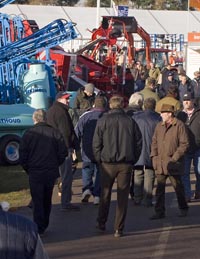 LAMMA show organisers are being urged to consider extending the show to three days to help avoid a repeat of this year’s opening-day traffic chaos.

Farmers Weekly has been contacted by several farmers who were dismayed to find themselves caught up in long jams on Wednesday (21 Jan).

Writing on the forums Bodo said: “I drove up from East Sussex on Wednesday morning (21 Jan) and it was a nightmare. There did seem to be more people than last year, but as it is a big show ground you would have thought that they might have a better strategy for getting people in and out. “

Cambridgeshire farmer Tom Mott said that it took him two hours to drive the last four miles to the show.

“LAMMA organisers needed to do something about the traffic situation which was the only thing spoiling this well-attended event,” he said.

“It may be a suggestion that the show is run over three days to spread the volume of visitors rather than have a surge on the first day.”

Farmers Weekly understands that show organisers intend to ask the question when they survey exhibitors about the show. But what do you think? Tell us on the forums. You can also vote in a poll on the issue.