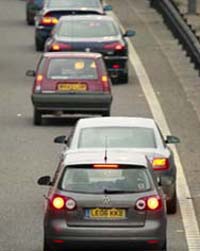 Traffic problems have hit the opening day of the LAMMA event.

Visitors trying to reach the Newark and Nottinghamshire Showground have faced long delays caused by show traffic, roadworks and accidents.

“Chaos” is how FWi forum user “markw” described the state of the roads.

“I’ve just come home in disgust having spent an hour moving 400 yards to the beet factory roundabout. As there was still three miles of stationary traffic to go, I gave up,” he says.

“On the way back there was a tailback of over two miles to the point I got to. Anyone in that would have a very long wait to see their dream tractor.”

Farmers Weekly‘s Isabel Davies said: “I set off from Surrey at 6.15am and at 11.30 still wasn’t in the showground. The last mile-and-a-half of the A1 took nearly two hours. It’s all very frustrating.”

For some, the delays brought back bad memories of traffic problems at last year’s Game Fair in Oxfordshire.