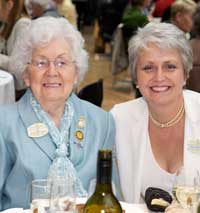 Nearly 100 former Land Girls and Lumber Jills have attended a special event hosted by The Queen.

The members of the Women’s Land Army and Timber Corps enjoyed lunch at the Royal Opera House hosted by DEFRA secretary Hilary Benn, before visiting Buckingham Palace where The Queen hosted tea for the veterans to celebrate their achievements.

One of those attending was ex-Land Army girl Dorothy Etherington from Trimdon, Co Durham, who travelled to London with daughter-in-law Marie (pictured).

The 84-year-old had “the most wonderful day” and has even now started to give talks at the WI and Mother’s Union about her experiences in the land army and of her day at the Palace.

“I was delighted to welcome the Land Girls and Lumber Jills to London as representatives of the thousands of women who provided food and timber for the nation during World War I and II,” commented Hilary Benn.

“Over 34,000 members of the Women’s Land Army and Timber Corps have now received a commemorative badge which recognises their service and acknowledges the debt that we owe them. This is a fitting tribute to their great efforts when our country was at war.”

Over the last year events have been held around the country to celebrate the work of these ladies, ranging from church and cathedral services to afternoon tea and have been organised by local councils and The Queen’s representatives (Lord Lieutenants) in each region.

| The Women’s Land Army and Timber Corps, also known as the Land Girls and Lumber Jills, worked on farms and in mills to feed the nation and provide timber as the male workers went to war.

| Commemorative badges were presented to 50 women by the Prime Minister at No 10 in 2008. The remaining women were sent their badges and certificates by post.