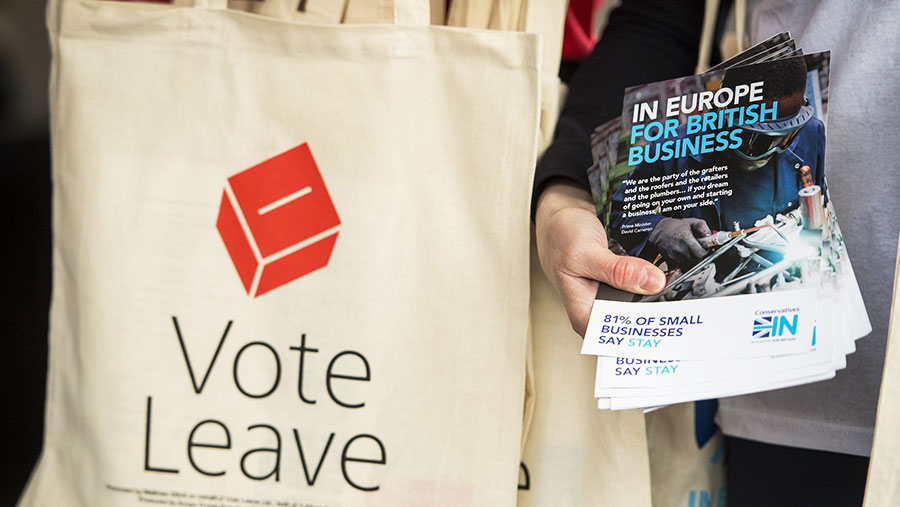 Farmers Weekly has received many letters from our readers concerning the EU referendum.

Many remain undecided and have written to express a desire for more information from unions and Defra.

Others have taken a clear stance and feel passionately about voting one way or the other.

Here are a selection of the letters received…

There is a lot of talk about trade deals and tariffs as the EU referendum approaches. It’s a complicated and uncertain area that I believe, for farming, is central to the Brexit debate.

The European single market is a unique arrangement. It allows trade within Europe that is, in some ways, freer than trade between different states in the US. It is also a British triumph, pushed through by Mrs Thatcher, which just shows what the UK can achieve in the EU.

None of the alternative trade models come close to retaining the benefits of the single market. Norway comes closest, but it is important to know that this deal excludes farming and fishing, while paying a large membership fee and allowing borderless free movement of people.

Outside of the single market, we will face tariffs and these will come straight off our bottom line as farmers. A tariff as high as 67% on fresh lamb would devastate our sheep industry.

So much for exports, what about imports? Here the Brexiteers have been both unclear and contradictory.

On the one hand Farage says he is against the EU deal with the US. At the other extreme, the group “Economists for Brexit” say that outside the EU we should unilaterally abolish all our tariffs. Michael Gove is on the same track when he says leaving the EU would give us lower food prices.

The Dutch study commissioned by the NFU showed that even a 50% cut in our import tariffs would cut incomes, in some cases severely, in all sectors and all parts of the UK.

By continuing to reform the EU and the CAP, farmers retain vital market access and, at the same time, pro-farming member states such as Ireland and France will ensure that Europe doesn’t become an agricultural dumping ground for low cost, lower standard production from around the world.

Farming will have more opportunities and fewer risks by continued membership of the EU.

See also: Read the latest twists and turns of the debate and the opinions of farmers and industry leaders on our EU referendum page

The poultry sector is closer to the market than some others, much less reliant on direct payments and particularly subject to regulation. So it’s not surprising that many poultry and egg producers’ first instinct is to believe there could be a better future outside the EU. They should think again.

Much of the excessive animal welfare pressure is home-grown. Many of the EU regulations and directives that poultry farms complain about started life in Britain – Integrated Pollution Prevention and Control (IPPC) and the Welfare of Laying Hens Directive both emanated from within the UK government.

Look at how government buckled on the chicken meat welfare code due to animal welfare NGO lobbying. Those who believe that being outside the EU would mean less legislation should bear in mind that it is highly unlikely that any UK government would repeal existing legislation, particularly designed to protect consumers and animal welfare.

Above all, poultry farmers often imagine they are unsupported. While this is true in terms of direct support, they are strongly supported by tariffs placed on imports from outside Europe and, until recently, export subsidies applied to EU product sold on to the world market.

The average import tariff applied for poultrymeat imports to the EU is 15.7%. While it is fact that the EU has negotiated special concessions for countries like Brazil and Thailand to import poultrymeat at zero duty, effectively allowing cheaper imports on to our market, it is worth flagging that the UK is the largest beneficiary of this policy. UK importers took up 33% of the available duty free quota in 2014.

It is clear that our importers value access to cheap poultrymeat produced beyond our borders. very highly. Let’s also not forget that our egg industry is protected by import tariffs, protecting us from large volumes of eggs and egg products produced in systems of production now banned in the UK/EU.

Politicians in favour of Brexit have argued that we could trade more freely with the rest of the world, bringing lower food prices for our consumers. They argue that we could negotiate new trade agreements on our own. However, take note how long this would take, and with 65 million consumers, we are simply not as attractive compared with the 500 million when we are part of the EU.

Remember also, that in negotiating trade deals, there has to be “give and take”. As a developed country we can “give” banking, telecommunications, and other services, but would need to “take” and, in trying to agree a deal with developing countries, these would be agricultural products.

A vote to leave would likely increase the costs of conducting business, pushing up prices to consumers. In an effort to mitigate this, government would seek Free Trade Agreements by removing import tariffs with countries that simply do not have our high standards, and it is our own poultry farmers who would suffer. The NFU-commissioned study on the impact of leaving the EU showed that even a 50% cut in tariffs would open our market even further to imports from around the world and reduce net poultry income by about £32,000 per farm per year.

Those whose livelihoods depend on the poultry sector may wish to bear the above in mind.

I am sick and tired of having to defend my position as a Brexiteer to people who should know better.

I am a farmer’s daughter whose father lost the farm in the late 1950s due to an outbreak of swine fever on a neighbouring farm. The period of quarantine ended by bankrupting us. Ever since, I have fought on behalf of farmers over foot-and-mouth and non-payment of EU subsidies.

With our own government and a strong Minister of Agriculture, we could get the industry back into real fighting shape.

All the above and much much more is a direct result of Britain’s membership of the EU, and yet I hear you are worried that subsidies will disappear should we come out. Please have the backbones that your union representatives don’t and perhaps we can have British pork, lamb, beef and chicken back on the menu; we can again drink milk that comes from a British cow.

Perhaps many younger people do not understand that and think that subsidies have just come in with the EU. Complete nonsense.

When you really think about what the UK contributes to CAP and what we actually get back, my blood begins to boil. This is our money, mine as a taxpayer, paid to the EU to put you, our farmers, out of business.

How many companies could pay out over double what they receive in revenue and survive – none, and yet this is precisely what the UK does with the EU. Is it any wonder the country’s borrowing and overdraft are where they are today? What a legacy for our future generations and one I cannot even contemplate. A child of 11 could do maths better than the government.

Please vote to leave on 23 June to get the industry we knew and loved back and, for goodness sake, make your unions earn their keep. No other industrial union would have allowed all this to happen without so much as a whimper.

I am disappointed that many of our leaders are so negative about the opportunity to break free from the European Union, but reassured that the majority of commonsense farmers take a more realistic view (News, 29 April).

I do not understand the arguments being put forward by those who wish to remain in an organisation which does not even begin to understand the efficiency and complexity of British Agriculture.

It is impossible to get a sensible farm policy that suits 26 diverse countries. It is difficult enough to find one that suits the whole of the UK, but at least if we escape the shackles of Brussels, we can negotiate with one government to get the best deal.

At present, even if we persuade our own politicians they then have to get the rest of Europe to agree, which is virtually impossible and usually ends up in months of fruitless negotiation and the usual EU fudge.

There is no escaping the huge annual deficit of monies paid to Europe by the UK, around £20 billion a year going out and £11.5 billion coming back. Some of the money coming back is in our farm subsidies and there really is no compelling reason to believe that would cease, especially as we could then make our case directly to our government which would still have a spare £8.5 billion on top to spend on health, education, roads etc.

It is little wonder that other EU countries don’t want us to leave. Who would want to lose one of their main benefactors? They won’t introduce tariffs or stop trading with us because we buy far more from them than we sell. You can’t blame President Obama or some other countries for trying to persuade us to stay in. We give them a voice in Europe.

Those of us who voted to join over 40 years ago are older and wiser now. If we vote to stay in on 23 June our negotiating position has gone for ever. We are no longer a proud nation, respected and admired the world over, but a tiny part of a bureaucratic organisation where farm subsidies support the inefficient and the entrepreneurs can go elsewhere.

Stop frightening us with your unfounded, alarmist rhetoric about our brave new world.

If we have two years of financial uncertainty after a Brexit vote, will farmers really suffer from a weaker pound and will lower land prices and lower rents really hurt the working farmer?

Let’s all be a bit more positive about the way forward and, whatever the result on 23 June, support British farming.