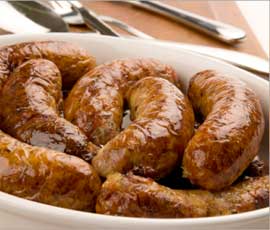 An application to give Lincolnshire sausages protected status has been turned down by the government.

Campaigners had wanted to ensure that only sausages made in the region could be given the label.

But DEFRA said the application for Protected Geographical Indication (PGI) status by the Lincolnshire Sausage Association was rejected because it did not meet the set criteria.

They cited several reasons for the decision, including the fact that Lincolnshire sausages have been made outside the county for more than 20 years, and that as many as 95% are made outside Lincolnshire.

There are also considerable variations in the recipe for sausages described as “Lincolnshire” across the UK and within the county itself.

“But with so many variations on the recipe, and 95% of sausages sold under the “Lincolnshire sausage” label being made outside the county, the application as it stood could have seriously damaged businesses and jobs.

“We remain open to looking at other options which would allow producers in Lincolnshire to highlight the traditional and local nature of their sausages without potentially damaging the overwhelming majority of manufacturers.”