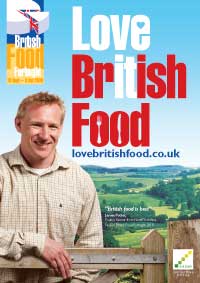 James Potter has beaten off competition from more than 100 people to become the Face of British Food Fortnight 2010.

The North Yorkshire egg producer was awarded the prestigious title after British Food Fortnight and Farmers Weekly launched the hunt for a face to front this year’s BFF campaign.

We were seeking one that encapsulated all that’s best about our food and farming industries – one that exuded characteristics such as wholesomeness, hard work, integrity, tradition and healthiness.


Entries soon flooded in from people of all ages and all backgrounds (the winner’s photo would appear on tens of thousands of BFF posters and other pieces of promotional literature).

We narrowed it down to a shortlist of 10 then involved agent-to-the-stars Max Clifford to help pick the winner.

“James is, in my opinion, the perfect person to be the Face of British Food Fortnight 2010 as his face has all the characteristics that I believe people would expect to be embodied in a farmer,” says Mr Clifford.


“He has a face full of charm, integrity and which exudes the outdoor life – a wonderful combination made even better by a huge smile.

“He’s got a face that both men and women will relate to in a positive way and, for me, is the ideal person to be the poster boy for British farming and food.

“Behind the face, I understand there is a progressive businessman who’s passionate about what he does and who loves the countryside.”

James was announced as the winner today (22 April) at a high-profile event in London, attended by HRH The Duchess of Cornwall.

James joined the family business in 1997 after studying a degree at the Royal Agricultural College in Cirencester.

At the time, the 300-acre family farm was dedicated to arable and free-range egg production. Keen to make a mark, he immediately pushed to start marketing the eggs directly and, within two years, helped secure accounts with two of the major multiples supplying regional lines of free-range eggs.

He soon realised that by sourcing and selling locally they could give consumers what they wanted, while reducing food miles and therefore the business’s own costs.

He has not been adverse to risk and was a leading force in the family’s decision to develop two further local free-range egg businesses in East Sussex and Bedfordshire.

Latterly, he has also been involved in the launch of a local food distribution/consolidation business in Yorkshire.

He and his brother Adrian were finalists in the poultry category of the 2008 Farmers Weekly Awards, when the judges praised their innovative and original thinking, their hands-on approach and their ambition and drive.

Chris Barber is part of a family which has been farming and making cheese at Maryland Farm in Ditcheat, Somerset since 1833. As well as milking their own cows, they buy milk from a further 100 farms in the south west and make 100% English Cheddar which is supplied all over the world.

Charles specialises in the breeding, rearing and finishing of rare-breed livestock using traditional methods. He established the meat company, Taste Tradition, with his mother in 2004. Supplying the trade, it’s currently the largest rare breed pig processors in the country and counts top chefs among its customers.


See the 10 shortlisted people
Have your say on what what you think the characteristics of a farming face are.


James wins a £300 Great Inns gift voucher, allowing him to stay in any of the 22 independently owned, historic Great Inns across the UK and sample their award-winning menus, using the freshest, regional produce and locally sourced ingredients.