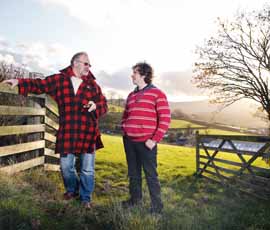 Some of the most experienced farmers in Wales are passing their knowledge and expertise on to the next generation through an innovative mentoring scheme designed to encourage more young people to farm.

The Young Entrants Support Scheme has been so successful in Wales that when DEFRA secretary Caroline Spelman was recently challenged to roll out a similar scheme in England, she admitted the idea had “merit”.

Although YESS offers grant aid of up to £15,000 for capital schemes on farms run by young entrants, a principle feature is the guidance and support delivered by a network of 20 mentors.

Glasnant Morgan (pictured, on left), who farms near Brecon, has over 40 years of farming experience, with particular expertise in grassland management and conservation. He is a winner of the British Grassland Society’s National Grassland Management Competition and in 2008 he won the FWAG Cymru-National Grid Silver Lapwing Farm Conservation competition.

He was appointed a mentor by the Welsh government and has eight young farmers under his wing. The experience and skills of mentees varies and therefore so does the support they need.

“Sometimes there is a big learning curve that someone needs to be guided along,” says Mr Morgan.

One of his group had trained in fabrication before being offered the chance to farm his aunt’s holding. Another of his mentees is 27-year-old Matthew Vaughan (pictured, on right) . Mr Vaughan’s route into farming hasn’t been conventional. His parents worked in engineering and nursing. It wasn’t until 2000 that he and his father started farming together near Bwlch, Brecon. He took over as head of holding with a majority share of the business in 2009 – a requirement of YESS.

Mr Vaughan admits he has gleaned a great deal from the time he has been allocated with Mr Morgan. The pair run similar upland sheep and beef systems and the knowledge handed down is chiefly on how to develop a sustainable grassland management system.

As part of his support package Mr Vaughan was allocated a day with his mentor, but the help did not end there.

Mr Morgan was able to use information from the plan ahead of their meeting. “It’s an ideal way of assessing performance so you can judge a farmer’s strengths and weaknesses before meeting up,” Mr Morgan explains.

“Matthew is very switched on, he’s not one for making mistakes, so my time with him has focused mainly on grassland management,” he said.

Mr Vaughan was equally upbeat about how the mentoring was progressing.

“You build up a relationship with your mentor. I know that if I have questions that need answering in a month’s time Glasnant would be willing to help,” says Mr Vaughan, who runs a herd of 20 sucklers and a flock of 500 ewes.

He sought a grant for additional housing, including a cattle shed that gives him the option of taking animals through to finishing. “I previously couldn’t keep youngstock long enough to realise their value, I had to sell them at 10 months because I just didn’t have the housing. I can now take them right through to finishing if the market is right.”

The capital expenditure was £32,125 and he qualified for the maximum YESS grant of £15,000. This, says Matthew, has enabled him to leapfrog forward a decade. “It might have taken me another 10 years to save the money I needed for this project. Every farmer thinks about the next project, the next goal, and the support scheme is making it possible for people like me.”

The scheme is open to people under the age of 40. To be eligible they must have adequate skills and competence in agriculture and either be setting up as head of the holding for the first time or have done so in the past 12 months.

For further information on YESS

Email the Welsh government at youngentrantstofarming@wales.gsi.gov.uk.

Read how the YESS scheme can help with succession planning.

What’s your opinion? Tell us what you think and see what others are saying on our forums.