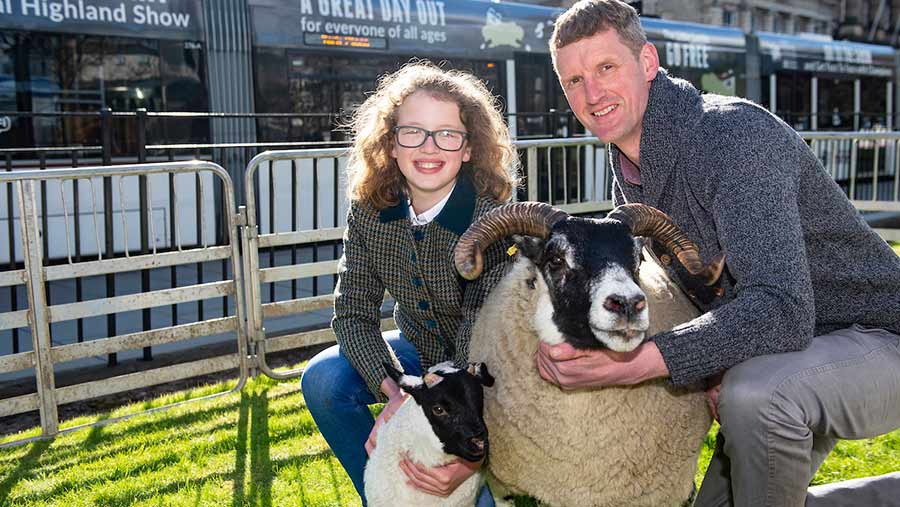 A Scottish Blackface sheep, bred by renowned farmer Malcolm Coubrough, has been selected as the “hero image” for this year’s Royal Highland Show (21-24 June).

The ewe, which won the Breed Title last year, is featuring the length and breadth of Scotland on billboards and buses – as well as on social media and TV.

“You never go to a show expecting to win, but once we’d won the class, I knew we had a chance,” the Lanarkshire farmer said.

“It was an absolutely fantastic moment. I haven’t won many shows, so that was definitely the biggest win I’ve had. I got a lovely reaction from my fellow breeders.”

Launched at St Andrew Square in Edinburgh, the campaign has involved a photoshoot – which Mr Coubrough’s  daughter, Emily (after whom the sheep was named), also attended.

“I was a little bit nervous about taking a Blackface ewe into the centre of the city,” he said. “But she was relaxed and totally chilled out. It’s been a great experience.”

The family’s enterprises are spread over four farms, covering about 2,430ha (6,000 acres).

At the heart of it are Mr Coubrough and his wife, Audrey; their children Emily and Charlie; his parents Malcolm and Ella; and shepherds Gordon MacDougal and Ross Henderson.

The stock includes about 1,900 pure Blackies – an iconic breed the family have always kept.

“Blackface sheep breeding is either in you or it’s not and I was hooked as a wee lad after following Dad at lambing time round the hill,”Mr Coubrough recalled.

“The breed is all about character. It’s a well-balanced animal with plenty of size, a good body and displaying a lot of character in the head.”

He adds: “It is bred to survive the brutality that the Scottish Highlands can throw at it, so it needs to have the qualities and temperament to cope with the harshest environments.

“This has been particularly important this year, as we’re coming out of one of the worst winters and springs I can remember. There might not be as many lambs on the ground as normal – but we’ve still got a product to sell.

“They’re a prolific breed. The better you look after a Blackie, the better she looks after you.”

“Much of the Scottish landscape has been shaped by native breeds, which have grazed the geography of this country for centuries. We owe a lot to these breeds for the beauty that we see.

“They have also provided an income for generations of farmers who have relied on their hardiness to generate a living – which has been vital for the economy of rural Scotland.”

Biggar-based Mr Coubrough will be showing four sheep at this year’s show.

“Like I say, you don’t go expecting to win – but we’re taking the best we’ve got and, if we’re competitive, we’ll have a chance.”