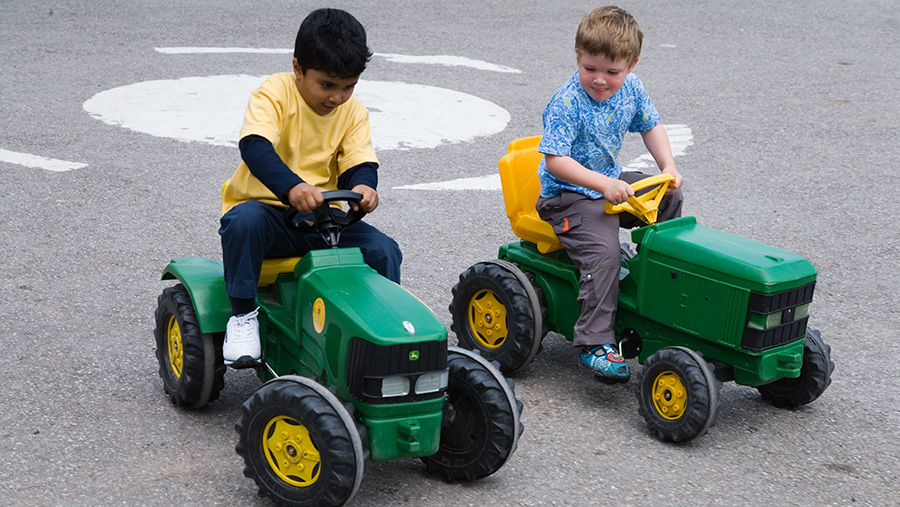 My son walked towards me with tears down his face and blood down his leg.

I had been stacking horse feed and he had been occupying himself by jumping from precarious bale to bale around the muck heap.

But then he’d fallen, shredding his thigh on a strand of rusty barbed wire that was sticking out from a tree trunk, the remnants of an old fence.

He was lucky; the wound didn’t need stitches and a year later only a silvery line of scar remains, but it was a reminder to both of us that farms are not playgrounds.

Over the past year, the media has been full of debate about how childhood has been eroded, lamenting the fact that children live in padded, overprotected worlds, ferried from school to structured activity to sofa.

Those of us with family farms feel smug at this point. This is no sterile cotton-wool upbringing for our kids, we think to ourselves, as we wash them down with a hosepipe before they are allowed back in the house.

Organisations such as The Wild Network advocate outdoors time involving healthy risk, with tree climbing and den building and the space to be free.

All of this makes sense and is a perfect antidote to the influx of technology into the children’s lives.

Tell us about your childhood experiences on a farm, and what you view as an acceptable level of risk for your children or grandchildren. Email fwfarmlife@rbi.co.uk

Is it a mistake, though, for farming families to translate this concept of healthy risk to a farm setting?

You don’t hear proponents of wild play advising kids to explore a factory or building site.

Are we kidding ourselves that just because farms look pretty and idyllic, we have different rules to other industries?

No one else takes their kids to work with them.

In the past decade, 45 children and young people have died on farms and more than 400 have been seriously injured.

The risks are very real, yet let us not forget that there are undeniably health benefits to farm life, too, including lots of exercise and time spent outdoors.

A recent study also found that children raised on farms, most notably dairy farms, have lower rates of allergies and asthma than other children.

Farm life has not been immune to the changes seen in wider society.

Overall, children’s roaming distance has decreased by 90% in the past 30 years.

Charting my family over the generations, that holds true for us, too, although the level of perceived “reasonable risk” seems to have only decreased in the past 20 or so years.

In my father’s childhood, back 60 years, he got into plenty of scrapes including falling off a bullock he was bare-back riding, setting fire to a tree with fireworks and shooting stuff with a rifle.

I believe he also derailed a train, but perhaps it’s best not to go into details on that.

My own childhood on an arable farm was equally full of unsupervised fun. I made dens in the bottom of massive straw stacks, buried myself in grain and drove an old Escort round the stubble fields by myself, aged 12.

As a mother, I now look back on some of it with horror, but the memories also make me smile. It was a wonderful upbringing, but do I dare let my children recreate it?

At ages seven and five, their play is still fairly managed and controlled in a way that mine never was. We don’t live on site, but even if we did, I don’t think I would let them roam free yet.

If you do, it is about managing the risk points on your farm and setting in place firm rules for your children. It makes sense to secure areas that are unsafe for children and also educate them.

The government leaflet Farms are not playgrounds – 10 ways you can get hurt on the farm is a good starting point for a conversation.

The advice in this highlights slurry pits, grain stores and stacked bales as particularly risky areas. They are also some of the most fun and attractive for children.

Meanwhile, the law states that no child under 13 may drive or ride on tractors and other self-propelled machines used in agriculture.

Have any farmers out there broken this rule? My personal view is that the situation counts. If a parent has a child in the tractor because childcare has fallen through and they are just trying to get work done, it is a recipe for disaster.

If it is a special ride around the yard for no purpose other than entertainment, then the risks are minimised (although do note this is still illegal).

When children have less farm-wise friends round to play (and are showing off their “backyard”) the risks are likely to be higher.

Similarly, when there are contractors on site, or it is a crazy busy time of the year with lots of long hours and vehicular movements, then the chances of danger are increased. It is worth thinking about how you keep your child safe at these times.

Growing up on a farm is an immense privilege. I believe if children get out of it in one piece they will have learned masses about risk assessment, their physical limits and established a deep connection to our natural environment.

It is an unforgettable tragedy every time a child is hurt or killed on a farm, but it would also be a tragedy if farm kids were not allowed to enjoy the unrivalled lifestyle that comes with living on a farm.

Kate Blincoe is a farmer’s daughter, mother-of-two and a freelance writer and author.