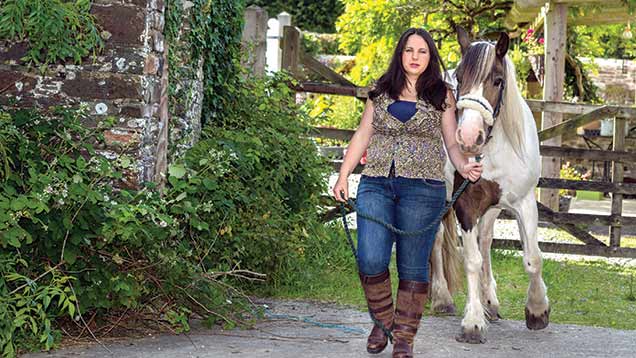 Summer is hotting up here in Cornwall and I have had to break out the shorts.

Of course, shorts on a farm are always more appealing in theory than in practice as summer also brings waist-high stinging nettles and horse flies the size of sparrows. Unfortunately I react really badly to horsefly bites and I’m currently nursing a few savage looking welts the size of burgers.

The cows haven’t been faring much better, so we have been busy doing fly treatments to try to keep them comfortable and avoid any sore eyes. Second cut is well under way and we are running out of space in the yard to stack all the bales; despite the spring being a bit cold and slow to get started, the grass is motoring away. We really need a few dozen more cows to eat it all.

A couple of attempts at haymaking have already been thwarted by heavy showers that seem to blow in about a day before the crop is fit, so it all had to be wrapped as haylage. Hopefully, we will have better luck this week. If I get another bale wrap bill I may cry. Not to mention that I need a good load of small bales to keep my ponies fed through the winter.

Although most of our forage is baled into big round bales, I really enjoy the manual process of doing the small bales. There is something timeless about the rhythmic clunking of the old New Holland baler and the sweaty work of stacking the bales on the trailers then unloading them into the barn.

Friends and family all come to help us gather them in and are treated to fish and chips washed down with lots of cold cider. There is a real celebratory atmosphere, although I’m sure if we had to make all the hay and silage that way, the novelty would soon wear off.

The horses have been causing me a good deal of headaches recently. For something that is supposed to be a hobby, they sure can cause a lot of stress. My new mount, Lilly, arrived a few months ago and I had high hopes that she would be a perfect replacement for Mabel, who is getting a bit long in the tooth.

However, with hindsight, buying such a young and inexperienced horse with an attitude like a Limousin bullock perhaps wasn’t the smartest move. I’m a much wimpier horsewoman than I used to be and Lilly’s dancing routine when I try to jump on is a bit unnerving, as is her habit of trying to lead me in from the field rather than the other way around.

I am gradually getting the measure of her and she is starting to settle down. I’m sure in a few more weeks we will be blazing a trail through the Tamar valley. She is a dream to ride, but compared to riding Mabel it’s like going from driving a Massey 35 to a JCB Fastrac. I’m really having to up my game.

No doubt feeling a little displaced by Lilly’s arrival, Mabel decided to garner some attention by sticking her hind leg through a stock fence and gave herself a nasty wire cut that meant she had to be shut in the barn for six weeks while it healed. For a time it was touch and go as to whether she would ever be sound again but thankfully she is back in one piece. I just hope Will doesn’t look too closely at the vets bill.

Edward is really starting to get a taste for this riding lark and is dragging me though the village on his pony every chance he gets. Trotting him around the lanes is certainly going to help me get fit, which is just as well as a friend has roped me into doing the “pretty muddy” Race For Life in August.

It is a great cause but 5k seems a long way when I get out of puff running up the lane. I’m clearly going to have to commit to a more structured training programme, not least because my teammate and I have a bit of a competitive streak. I know she will be out to beat my time and I’m not going to let that happen.

First barbecue of the summer

We decided to round off a successful week of silaging with the inaugural barbecue of the year. I even splashed out on steaks for the occasion. We all chilled out in the garden while Will fired up his “man oven”. I do love barbecuing – besides throwing together a quick salad, I can sit back and watch the boys cook, which I gladly did while polishing off a few glasses of rosé.

After about half an hour I enquired as to how the grill was going and warned Will not to overcook my steak (I like it so rare, it moos) and noticed that, despite being turned on, the grill was definitely not cooking the meat. After a brief investigation, Will sheepishly admitted that he used up most of the barbecue gas dehorning the calves.

So much for my night off cooking… we all trooped back inside to finish the meat off on the hob.

Jess Jeans and her husband Will run 75 suckler cows on an 80ha National Trust farm on the Devon/Cornwall border. They have two children, Edward and Lydia. Jess has a degree in rural business management and enjoys horse riding in her spare time.