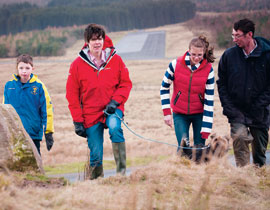 I am sure you will have encountered the sort of businessman, possibly a farmer, who thinks that the business will hit the rocks without his personal supervision 365 days a year and holds an almost superstitious belief that, should he have to go away, the whole thing will collapse if he is anywhere further than a two-hour drive away. Dear reader, I married him.

In the 19 years we have run our farm, our longest break has been four days in any one year and in that time we have explored the full circle of possible holiday destinations from Scotland to the Lake District to North Yorkshire and, erm, Scotland.

In most other walks of life this aversion to holidays would be regarded as bizarre. Indeed, when I was an auditor, I was trained to regard anyone who didn’t take a holiday with a certain amount of suspicion. It was sometimes the case that the faithful bookkeeper who refused to take any leave was actually running some sort of a fiddle, which would be discovered if anyone else got to take over the accounts when they were away.

I have also observed that most of the office workers I have encountered professionally not only regard a basic two weeks in the sun as a highlight of their year but also a fundamental human right.

However, amongst livestock farmers my husband’s attitude is not unique. Part of the reason is undoubtedly that they are actually doing a job they enjoy, in contrast to so many others. When the sun is shining and the annual hay/silage making panic is over, the farm can be a very pleasant place to be. The trouble is that you are always on call and can therefore never completely relax.

Clearly, it is harder for people with no employees to take time off. The dogs still need to be fed and the stock still need to be checked every day. So someone reliable has to be found, briefed and paid to do it – any or all of which can be problematic.

There is also the tendency to being financially hard up, especially after a horrible winter with horrendous feed bills. But, whereas in other occupations people can enjoy a “staycation” – staying at home but enjoying relaxing days out or in the garden, instead of working, this is not really practical on a farm, where your work confronts you every time you open the curtains.

Can you imagine a hill farmer relaxing on the sun lounger in the garden, calmly viewing a sheep hopping by with a bad foot; or the bull attempting to cross the fence to fraternise with the neighbouring cows – all without attempting to do something about it? No, for a livestock farmer to take a break, it is necessary to leave the premises.

This is exactly what we have just done. After all the stress of last winter, we resolved to go away in the summer and have just returned from a week away.

Jake was so relaxed on holiday that he was unperturbed by being in the same carriage as a group of kilted middle-aged Scottish football fans who drank and chanted their way down to London on the morning train. Indeed, the only thing that annoyed him at all was the apparently unchecked presence of ragwort everywhere.

On our return, he announced himself physically and mentally refreshed and ready for what the winter has to throw at us. So there you have it – the holiday – probably, one of the best management improvement tools you can purchase. Highly recommended.

Do you have a view on this topic? Have your say on our website forums.