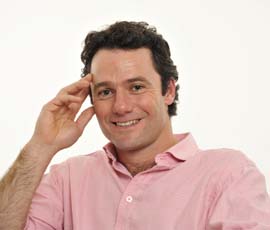 I recently read a large spread in one of the broadsheets about the success of Tyrrell’s crisps.

The article wrote about the founder of the business. Curiously, he is seldom mentioned in the press by his name alone. He is not just Will Chase, but “Herefordshire farmer Will Chase”, a stroke of PR genius, leaning on that earthy image, to establish the identity of his brand. But what irked me about this particular piece was its concluding sentence, “not bad for the son of a potato farmer”.

Why do some in the commercial world and much of Home Counties suburbia still treat the occupation of farmer with a condescension and curiosity which one would expect reserved for the circus monkey?

The author of the article, financial editor James Quinn, may be surprised to learn that farmers’ sons have shaped the past four social revolutions, giving us the world as we know it today.

The agricultural revolution was heavily influenced by Jethro Tull and Thomas Jefferson. Isaac Newton, a farmer’s son from Lincolnshire, is famed with starting the scientific revolution, and the engineering wonders of farmer’s son Marc and grandson Isambard Brunel, the industrial revolution. Furthermore, in the latter half of the last century, the Green revolution was led by Norman Borlaug, yet another farmer’s son from Iowa. The list goes on: US presidents (eight), Henry Ford of motor car fame, singers like Johnny Cash, even the poet Robbie Burns – all come from farming stock.

While Quinn was ridiculing farming’s heritage, across the Atlantic in New York, former Tatler staffer Ann Marie Gardner was launching a new magazine called Modern Farmer to a great fanfare. It hopes to target a new throng of people from as far and wide as West London to the East Village in New York who have a growing fascination with farming. Apparently, these Rurbanites are “making agriculture cool again”.

I purchased the magazine and on first glance the pages suggest that rurbanites yearn for the rural idyll of rugged clothing, penknives, vintage tractors, functionally useless weather beaten barns and the odd goat. But on deeper inspection, the magazine delves into some of the more gritty challenges of farming.

There are farmer’s stories from the developed, developing and less developed worlds, in a slightly awkward collision of science and kitsch. Think National Geographic meets Martha Stewart. But the magazine addresses the transition of interest from food to, in the words of the editor, “the curiosity even concern about how it is produced and distributed, the ethics of big ag and the sustainability of small ag”.

What is clear is that although interest is growing, it may come as a surprise to rurbanites who have a desire to be a part of “agri-culture” (their words not mine) that a farmer’s identity can’t be bought or manufactured. It is the people involved in the world of farming and food supply who form its fabric and identity.

Speak to people who have come into farming from other industries and they talk of its friendliness, humour, integrity and work ethic. This is the holy grail of “agri-culture” that Modern Farmer is trying to unearth.

Perhaps Mr Quinn has children who may one day pursue a career in farming. They would be welcomed with open arms and praised when it was due. But never would you hear the words “not bad for the son of a journalist”.

What do you think about how farmers are portrayed in the national media? Have your say on our website forums.