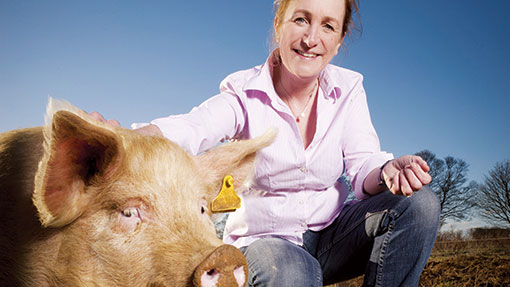 We are learning all the time.

I have learned that a certain type of concrete screed is so awkward that no paint on earth will stick to it. The current husband has found podcasts. One of my employees has learned that metal brackets, fixed the wrong way around on the old Fergie tractor, pierce radiators. Another learned that she now has regular access to her lovely granddaughter. The people of Scunthorpe, meanwhile, have learned that keeping so-called micropigs in their front rooms is not a good idea.

We have now clocked up more than six telephone calls from the local environmental health officer asking us to take large, fully-grown pigs from semi-detached or terraced houses in Scunthorpe.

Folk, clearly misguided, buy cute “teapot” piglets to live in their houses, believing that these adorable animals will become part of the family and cosy down by the fire. They then realise that their darling companions have grown to tea urn-size in a few months and show no signs of stopping. They do not understand that pigs are herd animals and need company and wonder why the “clean” pigs are messing up their living rooms and destroying their herbaceous borders. I have also had over 10 emails from individuals looking to rehome their beloved porcines.

The owners place strict stipulations – that the pigs are not to be slaughtered, that they can only be fed bananas/apples/cake and that they must be talked to regularly every day. Lovely, but insane.

We turn all away unfortunately, with the exception of our latest orphan. The farm shop received a call on a really cold day earlier this month saying that the pigs were out in California (I can’t believe it’s just us who has daft names for fields… the one in question is a blow-away sandy field overlooking the steelworks). Josh, our apprentice, was dispatched to search out the roaming “herd” and found one very, very small piglet huddled against the fence. He returned to the farm shop, to the delight of the customers, with piglet in arms.

Our only guess is that she was an unwanted Christmas present. She had obviously been weaned and spent her first two weeks in isolation, hidden under a pile of straw, only emerging for food and company. “Minnie the moocher” has now taken residence in the farm park and wags her tail whenever she sees a guest. Darren, the farm park manager, who was not keen to keep her, has been spotted talking to her, at length, over the fence.

My builders are beginning to feel a little pleased with themselves, too, as the new play barn looks fabulous. Who would have thought that a grey agricultural steel clad building would look so good with bright pink windows and doors. A dear friend of mine, Maggie, has been helping me with colours. She runs a successful interior design company in London and has given me many hours of email and on-site help. Andrew dismissed the idea that anyone could really make a difference, but even he had to admit that the unusual mixture of steel, wood and breezeblock was a stunning combination and quite unlike any other indoor play area. I am now trying to persuade Maggie to diversify into retail design – she has such an eye for detail – since farmers, especially, need help.

We were planning a “soft opening” a few weeks before half-term. However, surprise, surprise, this did not happen. As you read this we will be in the throes of half-term, wearing earplugs and, hopefully, managing hordes of children.

He is accompanying his recycling efforts with a podcast from America called Red River Farming. I am now being regaled at breakfast with tales of freezing temperatures, escalating beef prices and the popularity of drones in Dakota for field observation, not to mention the Farm Bill.

Tales a little closer to home will take centre stage at the FARMA conference near Stoneleigh on 24-26 February. Every year over 300 farm retailers get together to celebrate successes and provide solutions to all sorts of problems in relation to farming, farm shops, farmers markets and farm attractions. The coach tours visit inspirational retail outlets and the discussions on the coaches are almost as important as the stops. The trade show, held at Stoneleigh this year, hosts over 100 trade stands selling everything from IT advice to cheese and refrigeration to crisps. The awards evening celebrates the best in the industry.

As chairman, I have to stand up and talk. I am constantly amazed at the confidence of some presenters. They make it look so easy while my knees knock behind the podium.

I’m off now to give Minnie a banana. Even the hardest hearts can melt.

Sally and husband Andrew farm 364ha just outside Scunthorpe in North Lincolnshire. They have a farm shop, The Pink Pig Farm (a former winner in the Diversification category of the Farmers Weekly Awards), with a 90-seater café and farm trail. Sally is currently chairman of FARMA (the Farmers’ Retail and Markets Association).